Neemuch: As the assembly elections in the state draw near, the administrative machinery across the districts is busy in encouraging electorate to vote and leaders of various parties too busy in explaining people how they will help in future if they vote for them. However, condition remains unchanged for 5,000 odd voters of Jetpura, Nilkanthpura, Chaldu and some other neigbouring localities as they belong to iniquitous Banchara community.

Many voters, particularly females, who don’t want to quote their names, narrated their plights claiming that even after 100% voting, we are neglected by parties, which made big promises during campaigning but hardly visit our localities after the election. “Leaving the mucky trade of prostitution is not easy, but for women from the Banchara tribe in Madhya Pradesh, prostitution is their fate.

This belt- Ratlam, Mandsaur and Neemuch- although notorious for opium cultivation, is also known for this community, in which prostitution has been a societal approval,” she said. “Only political will can bring change in our life,” she added. Notably, the district holds a distinct place in state politics as two chief ministers namely Virendra Saklecha (January 18, 1978 to January 19, 1980) from Jawad constituency and Sunderlal Patwa (twice – Jan 1980 to Feb 1980 and March 1990 to December 1992) from Manasa constituency from Neemuch district held chief minister’s post.

Even after that there is hardly any change came in the life of Banchara community thanks to local administration and inaction of public representatives towards their development. Total population of Banchara community, which spreads over 75 villages in three districts of Neemuch, Mandsaur and Ratlam, is about 23,000. They are spread over 70 deras (settlements), of which at least 65% are women. In 2012, the MP Women Empowerment Department conducted a survey in Neemuch’s 24 Banchara -dominated villages which showed that the number of women is more than men– 3,595 women and 2,770 men. In 19 villages prostitution is a social compulsion rather than an economic necessity.

The families are certainly giving preference to girl child but for wrong reasons. Another woman belongs to the community quoted that efforts which are being going on in the area are just a drop in the ocean. “After the elections, only police came to our place either to extort money or to raid our places but no one cares for us. We don’t have other options to earn our livelihood,” she said. On high voting percentage, she said that voting is our democratic right and we never let it go even after we were befooled by the politicians every time.

NGO activist Akash Chouhan, who himself belongs to this community, admitted that the government efforts are not enough for development of the community. “The official attempts, however, have turned out to be half-hearted and response is lukewarm. Officials and political leaders must come forward and tried to bring people of this community to the main stream as this is only way to change their life,” Chouhan said.

When contacted local MLA Dilip Parihar over allegations leveled by people, he said government making all possible attempts to bring Banchara community people to the mainstream. Not only this, we are providing them all the benefits of government schemes as well as doing development work in their areas and slowly, but surely situation will be changed, Parihar anticipated.

District collector Rakesh Shrivastava said that administration used to organise voter awareness drive ahead every election. Even this time, we are organising a seven-day drive from October 30. To encourage female voters, we will conduct a special drive. Shrivastava further said that the administration and police conduct Astha drive from time to time and things would change with time. 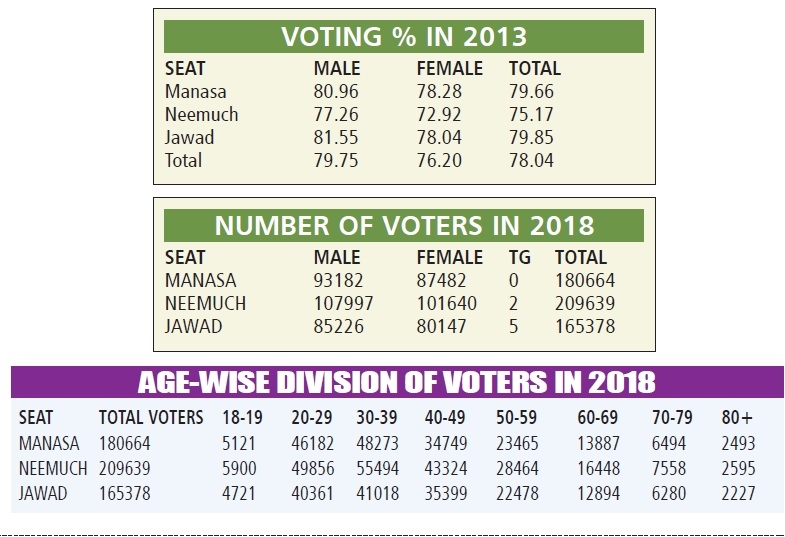