“I live alone here, as my family members live in Dabra. They might kill me. I live in fear. Please Modiji (Prime Minister Narendra Modi) help me,” the woman is heard saying in the video.
Staff Reporter 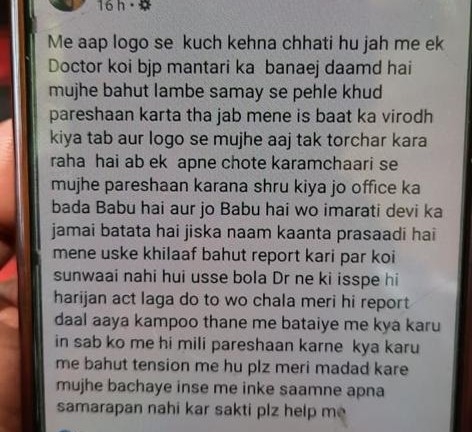 Bhopal (Madhya Pradesh): A female nurse posted at Jaya Arogya Hospital in Gwalior accused a doctor of sexually and mentally harassing her. The doctor is a son-in-law of a senior BJP leader of Gwalior-Chambal region.

The woman has lodged a complaint in Gwalior superintendent of police office. The woman claimed that as the accused doctor is a relative of BJP leader, police are hesitant to take action against him.

She also posted a video on social media, in which she claimed that she would be killed. “I live alone here, as my family members live in Dabra. They might kill me. I live in fear. Please Modiji (Prime Minister Narendra Modi) help me,” the woman is heard saying in the video.

In the video, the woman claimed that Dr Pravesh Bhadauriya forced her to have physical relations with her and when she refuted, he began torturing her mentally. The woman also claimed that Dr Bhadauriya threatened to get her suspended.

She has also accused a clerk Kanta Prasad, posted at same hospital, of harassing her on instructions of Dr Bhadauriya. The woman said the clerk claimed that he is a close relative of former cabinet minister Imarti Devi.

Though Dr Bhadauriya couldn’t be contacted by Free Press, he told a Hindi news portal that he didn’t know the nurse. “Since I helped police to bust a gang involved in black marketing of black fungus injections, several fake complaints have been lodged against me. I work for 16 to 18 hours and stay away from family to serve people in pandemic. I don’t care about such fake complaints. I am relative of the BJP leader but my identity is that of a doctor,” the news portal quoted Dr Bhadauriya saying this.

Gwalior Superintendent of Police Amit Sanghi said a probe has been ordered. “A woman sub inspector has been deputed to conduct a probe into the matter. Further action will be taken on basis of report,” he told Free Press.