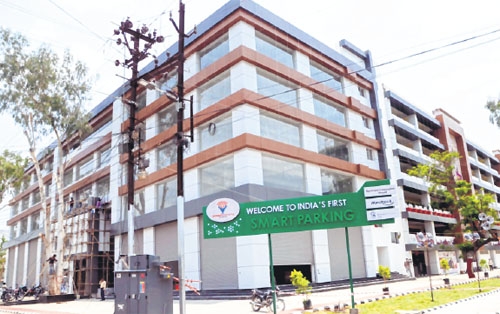 Bhopal: The vehicles of the visitors parked outside the multilevel parking (MLP) were towed away by the police on Saturday. The MPL was not used by the shopkeepers or the residents in the new market, on the first day of the market being declared no vehicle zone. The traffic police had declared that vehicles not parked in MLP will be towed away.

The new market traders association maintained that the passes for parking their vehicles inside the multi level parking will soon be made available to the shopkeepers inside the market and also for the residents in the area. The new market traders association, traffic police the Bhopal Municipal Corporation in a meet had reached an understanding that from February 23, the new market will turn into no vehicle zone as well as the shopkeepers will only use the areas provided for keeping their belongings.

While the rule of putting belongings inside the shop was followed, but the vehicles were still parked in undesignated places. Scenes like shopkeepers running behind the police van urging the team to release their two-wheelers were witnessed throughout the day. A shopkeeper in the new market said that he is yet to get the pass and until then he will keep his vehicles inside.

He said the multi level parking is for them but how many passes will the BMC provide as there are over 700 shops in the market and every shop has two to three employees. The parking has space for only two thousand two wheelers. In that situation feasibility of passes for for all the shopkeepers and residents seems a tough job.