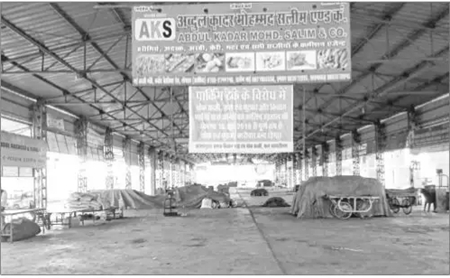 Bhopal: Be ready to pay extra for onions, carrot and peas as the prices of vegetables are likely to soar in the state capital over week supply. Traders at Pt Laxminarayan Krishi Upaj Mandi, Karond went on indefinite strike on Thursday protesting the mandi committee move to reintroduce paid parking system in the wholesale market.

Traders of Karond Mandi, which caters to state capital’s demands of vegetables and agricultural produce, have raised the ante after the mandi committee allotted tender of the parking lot to a contractor. The traders had protested last year also when the paid parking system was introduced in the mandi. Now since new tender has been allotted, the merchants decided to go on indefinite strike demanding cancellation of the system.

Routine working of the Mandi remained paralyzed on Thursday as the traders shut down their establishments accusing the contactor of taking hefty amount in name of parking fee. The prices of vegetables are likely to shoot up in the coming days as there will be no business at the Mandi till the traders decide to end their stir.

Mandi administration has decided to convene a meeting to review the proposal passed in the committee regarding tender which has been given to Bhojpur-based contractor. However the traders have warned to continue their strike till the issue is resolved completely.
Till last year there was no parking charges at the mandi, however, much to the annoyance of the traders, Bhopal, administration introduced paid parking system here. No such system is introduced in any other wholesale mandi in the state.

Salim, one of traders, said, “In fact, there is no notified parking lot at Karond Mandi and it is the first Mandi of its kind in the state where there is paid parking. “In absence of notified parking lot, Mandi administration has no right to call tender for the parking lot. It is just to authorize the parking contractor to loot traders in the name of parking. We will protest this and observe strike, ” said Salim.
Echoing the same views, Shahnawaz, another trader, said that it is not justified to call tenders for allotting the parking lot at Mandi. Farmers and others visit mandi and park their vehicles. There is no paid parking system anywhere as contractors charges exorbitantly, he added.

Defending the decision, deputy director MP Mandi Board Ritu Chauhan said that the proposal was passed in Mandi Samiti regarding parking lot tender and accordingly tender has been given to a contractor. “I have called a meeting to review the proposal and still there is scope to reconsider the decision,” assured the official.