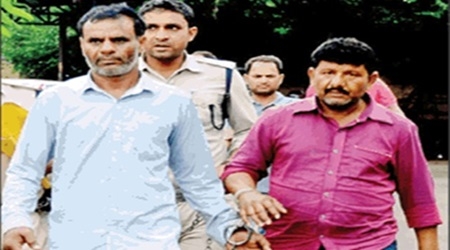 ASP Dr Dinesh Koshal informed Free Press that Bhopal police were shocked to learn the modus operandi of three serial killers of 30 people including driver and conductors. He said that they had adopted the friendship theory that is they first developed friendship with the driver by introducing themselves as drivers and stating that they are out of work.

They would target their victims at dhabas or on road while asking for lift. It is similar to the technique adopted by zeher khurans who loot fellow passengers in train by developing good relations with them. They later offered them snacks or drinks laced with sedatives to loot them when they doze off.

Similarly the nabbed accused offered tea, milk or liquor to the driver and the conductor after striking friendships. They always carry sleeping pills which they would skilfully mix in the drinks of their victims. They would kill them and flee with the truck no sooner than their victims fell asleep. They enjoyed good connections with scrap dealers and with traders of stolen goods.

Importantly presence of sleeping pills is not traced in the post-mortem because it dissolves in the body. So the police never ever realised until now that 30 victims are killed in a cold blooded manner.  Three different police teams have been sent to recover the looted property on the basis of information provided by the accused.

Bhopal police have arrested three accused including the king pin Adesh Khambra and his allies Jaikaran Prajapati resident of Bhopal and Tukaram Banjara from Nagpur on Friday. They are arrested for killing of 30 drivers and conductors. The police will soon release an advisory to truckers telling them not to trust anyone who asks for a lift or for work.