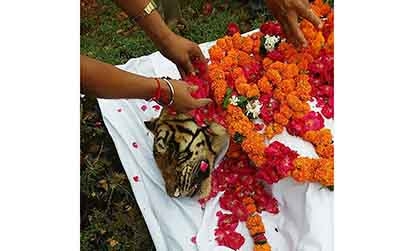 Bhopal (Madhya Pradesh): As many as 85 tigers, including 32 cubs, have died in the past four years due to various reasons in wildlife habitats of Madhya Pradesh, the government has informed the state Assembly.

The MLA had also sought information about how many big cats had escaped from various reserves, to which Shah said that the movement of the tigers through various forest corridors is a natural process in search for food, partners, better habitat and new territory.

The National Tiger Conservation Authority (NTCA) reports suggested that a total 202 tigers were reported to have died between 2012 and 2020 in Madhya Pradesh. The data available on the NTCA website said that 38 tigers died in the state between January and December this year so far.

Madhya Pradesh had regained the tag of tiger state in the 2018 census for being home to 526 big cats, two more than Karnataka.

Earlier, the MP had lost this tag to Karnataka in the all-India tiger estimation exercise for 2010, primarily due to alleged poaching in the Panna Tiger Reserve.