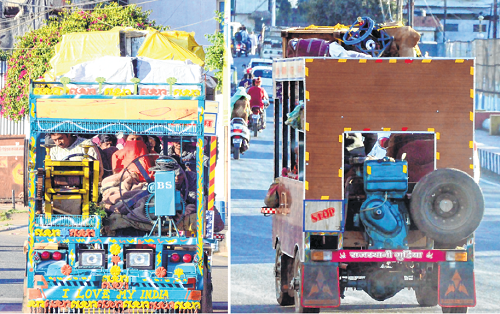 Bhopal: Rickety “Jugad” vehicles which are a common mode of transportation in rural belt of the country are leaving their trails on the city roads. Decorated low-cost assembled vehicles plying on city roads here are catching the eyeballs of commuters. Recently a few such vehicles were seen commuting on roads here under the very nose of the traffic police.

The jugaad vehicles are threat to life of passengers and other commuters on the road as they are neither registered nor insured. Taking note of the threat to people’s life, the traffic police have assured to initiate legal action against such jugaad automobiles which are plying on city roads with without registration.

Traffic in-charge Pradeep Chauhan said that legal action will be initiated against the owner of such jugaad vehicles plying in the city. No such vehicles will be allowed on city roads, he added. Jugaad vehicles – designed and manufactured by local mechanics – are the makeshift, rickety lorries and automobiles powered by irrigation pump motors, generators, engines of old jeeps, tractor or that of a van.

These shaky unsafe vehicles form a part of public transport in rural areas and could be seen used in loading farm produce. While engine is the main component, the other component includes steering wheel, levers and pedals. The jugaad ‘designers’ do not much believes in exterior body; but when it comes for light, and decoration, they do keep in mind the taste of their customer.

Earlier in 2015, Union minister for state for transport had told parliament that just ‘jugaad’ to produce low cost assembly vehicles was not acceptable and as vehicles need to fulfill the norms under the Motor Vehicle Act. Jugads do not conform to the specifications of a Motor Vehicle under Motor Vehicle Act, 1988, Minister had added replying to a query whether the plying of low cost assembled vehicles, more commonly known as ‘jugaad’, is permissible in accordance with Motor Vehicles Act.

Any motor vehicle as defined in section 2 (28) of Motor Vehicle Act, 1988 (MV Act) has to conform to the testing procedure and specification notified under the Central Motor Vehicles Rules, 1989. However, relaxation to e-rickshaw and e-cart drivers only. “We will not allow any “jugad” (hand-crafted or assembled vehicles) in the state capital as they do not comply with traffic rules and norms and do not have any registration.” Pradeep Chauhan, Traffic in-charge

Earlier this month, a Delhi court had directed the police to ensure a complete ban on jugaad vehicles or cycle rickshaws fitted with modified scooter engines in the city terming these as “menace” to public safety. It also observed that under the Motor Vehicle Act, these ‘jugaads’ rickshaws do not even come under the ambit of any motor vehicle and therefore cannot ply on roads of Delhi.