Bhopal: It's not first time when Digvijaya Singh goofed up with photographs in tweeting and getting trolled

In the photo he posted on Tuesday some people are seen hoisting religious flags on a shrine of a minority community.

Bhopal (Madhya Pradesh): Senior Congress leader and Rajya Sabha member Digvijaya Singh (75) deleted his tweet within hours of posting a photo on Tuesday the moment BJP launched an attack on him claiming the photo he had posted was not of Madhya Pradesh.

However, it's not the first time Digvijaya Singh had to face embarrassment due to a wrong photo posted by him on his Twitter handle. In the photo he posted on Tuesday some people are seen hoisting religious flags on a shrine of a minority community.

This photo is not of Madhya Pradesh. That's why he had to delete it. Earlier, in October 2018 Singh shared images of 108 and 102 ambulances lying defunct to ostensibly show the Yogi Adityanath government in Uttar Pradesh in a poor light.

But the photos were found to be carrying images of Andhra Pradesh ambulances, not Uttar Pradesh's. Earlier, he posted a photo of a bridge with cracks in it claiming it to be a railway bridge in Bhopal.

Singh suggested that given the poor quality of construction the new bridge developed cracks.

But, interestingly, the photo was from Pakistan, not Bhopal resulting in a massive attack on him from the ruling party.

To make a mockery of Digvijaya Singh's claim MP's medical education minister Vishwas Sarang reached the bridge site with binoculars in his hand to suggest no crack was seen in the bridge even with the help of binoculars.

That gave a shot in the BJP's arms from another angle too.

BJP MLA Rameshwar Sharma had said Digvijaya Singh posted a Pakistan bridge photo as his heart lay in Pakistan only.

Digvijaya Singh apologised too for sharing the bridge picture. 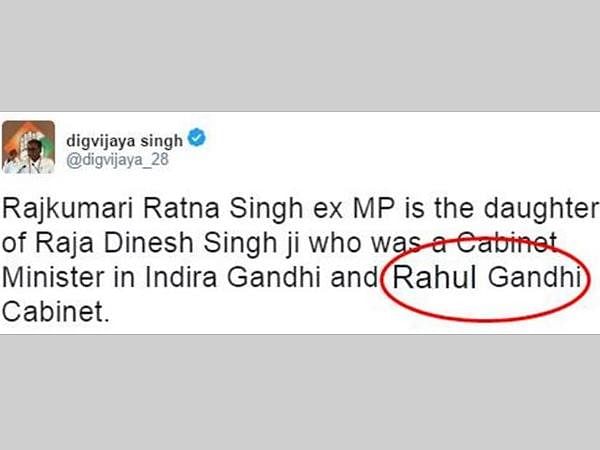 Earlier in 2017, he had to delete a tweet he posted to tell people about Rajkumari Ratna Singh having been a member of 'Rahul Gandhi cabinet' instead of writing 'Rajiv Gandhi cabinet'. HomeBhopalBhopal: It's not first time when Digvijaya Singh goofed up with photographs in tweeting and getting trolled