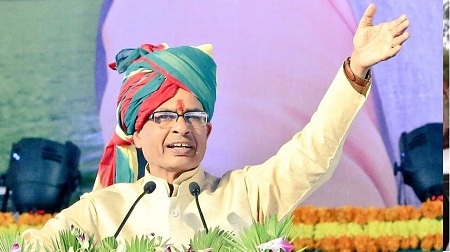 The ‘jan ashirwaad yatra’ launched by Chief Minister Shivraj Singh Chouhan on July 14 from Ujjain for the assembly election concluded at Jabalpur on Thursday. Chouhan during the Yatra covered 187 constituencies across the state. Chouhan, at the beginning of the Yatra said that all 230 constituencies would be covered. The Yatra could not cover 43 constituencies due to time constraints.

BJP leaders maintain that Chouhan would tour the constituencies during election campaign, which could not be covered during the Yatra. On the other hand, Congress state president Kamal Nath has said that Chouhan stopped his Yatra seeing adverse conditions and people’s opposition. Nath asked as to why Chouhan did not visit the remaining constituencies. He claimed that it was difficult to bring government servants in the Yatra, with code of conduct becoming effective and people’s gathering could not be arranged.

Chouhan, during conclusion of his Yatra at Jabalpur, said Digvijaya Singh had ruined the state. Chouhan said people of Punjab have seen the reality of Rahul Gandhi’s lie and people of Madhya Pradesh would not be influenced by his gimmicks. BJP state president Rakesh Singh said that Congress had no trust on Kamal Nath and that was why, it had appointed four working presidents along with Nath.

The diesel tank in the Rath installed for the Yatra had emptied at Jabalpur. The local MLA Indu Tiwari arranged diesel for the Rath.