Bhopal: CM gets upset, scolds officers on plethora of complaints in native village

Lack of water supply cause for upset
Staff Reporter 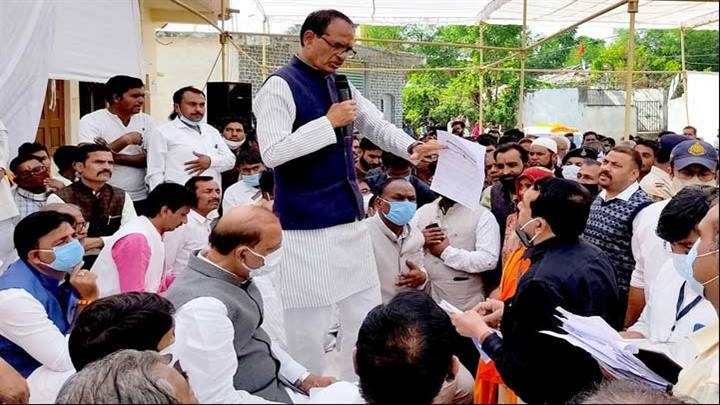 Bhopal: Will the Chief Minister check water tap in every house? Will he see if there is water available or not? What do you people do? If problems are not resolved within 15 days, you will not remain here. These words came from Chief Minister Shivraj Singh Chouhan while scolding a PHED official. He was quite upset when he got a good number of complaints from residents of his native village, Jait and pother neighbouring villages in Sehore district, on Saturday.Chouhan was on a visit to his village after Deepawali when he received the complaints from villagers while interacting with them during a Chaupal.

A large number of people from Jait and other villages complained to the CM that they had not been getting water through water taps for the past about fortnight and that their complaints to the officers concerned of Public Health Engineering department hardly yielded any result.An annoyed CM asked one of the PHE officers his name and while scolding him warned him that if the complaints were not redressed within 15 days he (the officer) would not remain there (place of posting). He also instructed Commissioner, Bhopal division Gulshan Bamra, who was also present at the venue, to take care of the PHE officers' work.During review of development works in Budhni area, the CM instructed the district administration to make enhanced efforts for placement of local youths in various industrial units.

"Youth should also be linked with various employment schemes by organising employment fairs", he said. He directed the officials to promote business of wooden toys in Budhni, benefit the small businessmen, address their difficulties and speed up the development of toy cluster in the region. He also instructed authorities to ensure employment to youths under Mukhyamantri Udyam Kranti Yojna, Mudra Yojana as well as Street Vendors Welfare Scheme.Principal secretary to the CM, Manish Rastogi, secretary M Selvendran, principal secretary Urban Development and Housing Manish Singh, secretary Micro, Small, Medium and Enterprise Industries and commissioner Industries P Narhari and other officers were present.