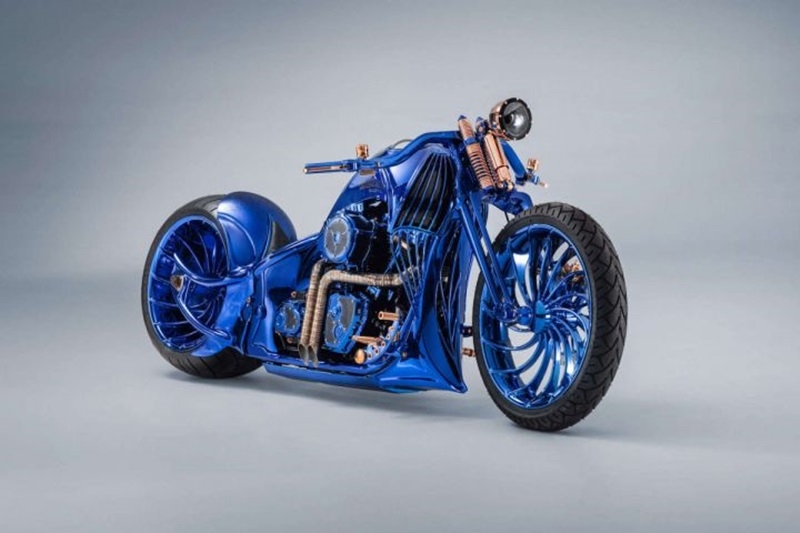 In a world where everything is mass produced and ends up looking the same, the ability to customise a motorcycle has given many motorcycle owners a chance to stand out from the crowd. Some of these modified motorcycles are subtle and practical, while some are just outright bonkers. This here is the Harley-Davidson Blue Edition, the result of a collaboration between Bucherer Fine Jewellery and Bundnerbike, a chop-shop specialists.

Eight employees from both companies, including Swiss craftsmen and German motorcycle designers, spent over 2,500 man hours on this project. And we’re sure you’d agree that the result is just breathtaking, especially when you take its price tag into consideration. The Harley-Davidson Blue Edition was unveiled in Zurich recently and it costs a whopping $1.88 million USD (Rs 12.2 crores at current exchange rate).

The Harley-Davidson Blue Edition, which is based on the Softail Slim S, gets a custom retro-styled bodywork. The company says every metal element on the motorcycle has been shaped, welded, beaten and polished by hand. Even the wheel rims are custom-made. Then there’s the small window in the camshaft that houses heat-resistant LEDs to illuminate the internal parts of the engine. Parts such as the levers, reservoir cap, headlight cover and foot controls have all received a gold treatment as well. The cowhide saddle, on the other hand, is hand-sewn in Switzerland.

It also features a unique iridescent paint job that is achieved by using an elaborate process. First, every part of the motorcycle is silver plated. Then, six coats of different colours are used in what the company refers to as ‘a special coating method), where it finally shines in its deep blue glory.

If that doesn’t impress you, the top of the fuel tank has two cutouts that are backlit and covered in armoured glass. On the left, you’ll jewellery company’s Heaven solitaire ring with a 5.40-carat diamond called The Dizzler. The other side houses a custom-made watch based on the Patravi TravelTec II model.

The watch is held by silicon rings that ensures it doesn’t get damaged by the vibrations of the V-twin motor. This holder also winds the watch regularly and continues to run even if the motorcycle remains unused.

Apart from this, you can also find a few more Dizzler diamond rings on the bar ends and the top of the forks. Owners of the motorcycle will also receive a custom Carl F. Bucherer wrist watch that incorporated design elements of the motorcycle on its dial too.