All of a sudden, the bleakness of the NPA scenario is giving birth to new possibilities and opportunities. Kotak believes, as do many others, that the increasing bad debts of public sector banks could crimp the ability of public sector banks (PSBs) to advance money.  That could leave the field open for private banks to step in.

Not that private banks haven’t been guilty of advancing bad loans. Watch the list alongside. ICICI and Axis Bank figure among the top 10. But they have the ability to squeeze out more revenues per employee than PSBs have or can. What is also common to the two private banks among the top ten is that their top management was involved with finance related businesses that were carried out by their relatives. 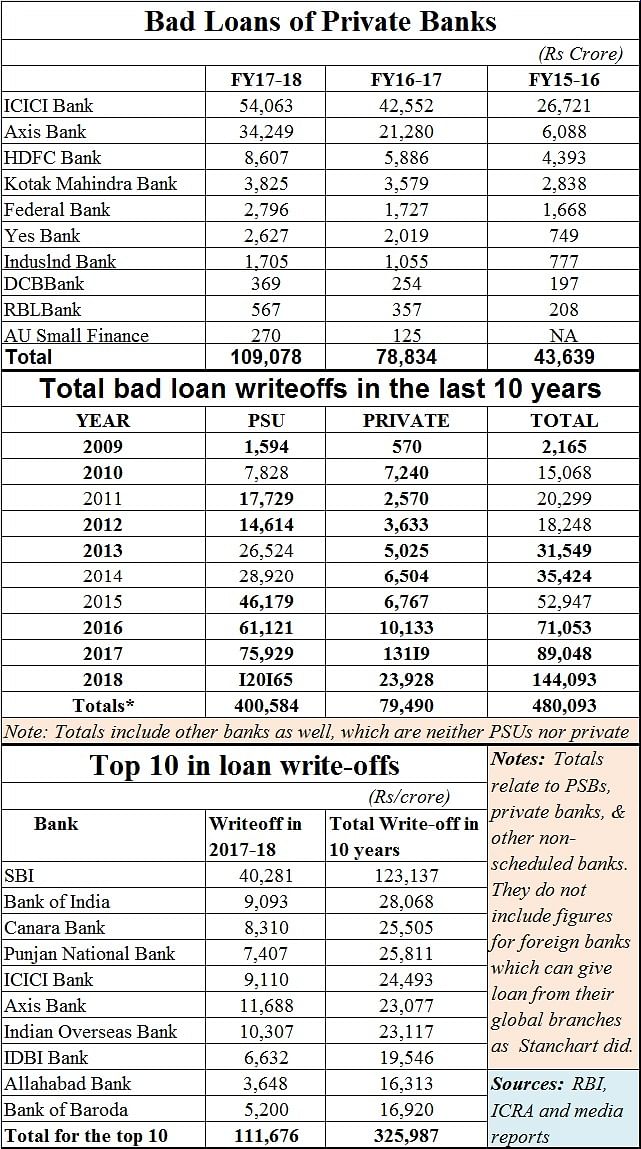 Unfortunately, neither the RBI nor the finance ministry has still come out with guidelines which make both private sector and PSB managements face severe punishment in case they enter into conflict of interest relationships. Either the manager must quit his/her post, or the relatives must quit such lines of business (http:// www. asiaconverge. com/2018/05/chanda-kochar-must-go/ and http:// www.asiaconverge.com/2018/05/did-rbi-and-govt-allow-npa-loot/). Not surprisingly, the best private banks are those that have not encouraged such conflict of interest situations.

Yet, there is no denying that — thanks to the Insolvency and Bankruptcy Code kicking in — banks are suddenly settling bad debts at over 75 paise to a rupee, where earlier they were happy if they got 30. It has also made banks look to small and medium sized enterprises (SMEs), which were earlier ignored.

But the most interesting development is the rapid growth non-banking financial companies (NBFCs) have begun to play.  Foreign companies that weren’t allowed too much of play space by the Reserve Bank of India (RBI) have suddenly found that they are more than welcome.  Just a few days ago, even P Vijaya Kumar, chief general manager, department of non-banking supervision, was on record exhorting NBFCs not to emulate banks and lend only to large clients. SME’s, he clarified, offer bigger profits and opportunities that big players had ignored.

Even S S Mundra, former deputy governor, RBI, has gone on record admitting that “In the last few years, NBFCs have expanded their market share strongly, including making some inroads into the bank business. Also, there is significant interconnectedness between banks and NBFCs.”

Thanks to the bad debts of large banks, involving large players, financial markets are reshaping themselves. Private banks, NBFCs, and small deposits from the teeming millions (who were unbanked before) will soon create new market opportunities.  And as Kotak put it, “in that kind of a business, you have to have fundamental quality of prudence, simplicity, etc, or else this is one of the most difficult businesses in the world.”

Replace microfinance with NBFC, and you will see huge opportunities emerging where private banks and NBFCs will find common ground to explore new avenues that few looked at before.

Maybe, if the government does not allow regulatory capture by erstwhile defaulters, the pain of the NPAs could lead to the blossoming of other businesses that should make India more vibrant than ever before.

How much can Bharat Jodo Yatra achieve?