German Chancellor Olaf Scholz said ahead of a session with Ukrainian President Volodymyr Zelenskyy that the G-7 countries' policies on Ukraine are "very much aligned," and that they see the need to be both tough and cautions.

Ukrainian President Volodymyr Zelenksyy has joined the Group of Seven leaders by video link at their summit in the Bavarian Alps.

Zelenskyy could be seen on a television screen next to the round table where the leaders sat Monday at the secluded Schloss Elmau luxury hotel. His address wasn't being shown to the public.

The G-7 leaders are committing themselves to supporting Ukraine for the long haul at their summit, with both immediate help and long-term rebuilding on the agenda.

German Chancellor Olaf Scholz said ahead of a session with Ukrainian President Volodymyr Zelenskyy that the G-7 countries' policies on Ukraine are "very much aligned," and that they see the need to be both tough and cautions.

Scholz said after meeting Canadian Prime Minister Justin Trudeau on Monday that "we are taking tough decisions, that we are also cautious, that we will help ... Ukraine as much as possible but that we also avoid that there will be a big conflict between Russia and NATO." He added that "this is what is of essence -- to be tough and thinking about the necessities of the time we are living in." The G-7 leaders are to confer by video link Monday morning with Zelenskyy.

The Group of Seven economic powers are set to announce an agreement to pursue a price cap on Russian oil, aiming to curb Moscow's energy revenues, a US official said Monday. The move is part of a joint effort of support for Ukraine that includes raising tariffs on Russian goods and imposing new sanctions on hundreds of Russian officials and entities supporting the four month long war.

Leaders were finalising the deal to seek a price cap during their three-day summit in the German Alps. The details of how a price cap would work, as well as its impact on the Russian economy, were to be resolved by the G-7 finance ministers in the coming weeks and months.

The largest democratic economies will also commit to raising tariffs on Russian imports to their countries, with the US announcing new tariffs on 570 categories of goods, as well as use of sanctions to target Russia's defence supply chains that support its effort to rearm during the war.

The senior administration official spoke on the condition of anonymity to preview the announcements from the G-7 leaders' summit, where they are set to confer by video link with Ukrainian President Volodymyr Zelenskyy.

German Chancellor Olaf Scholz says the West has no intention to "torpedo" the Group of 20 - the group of major economies that also includes Russia.

This year's G-20 summit is due to take place in Indonesia in November. There are questions over whether Western leaders will sit down with Russian President Vladimir Putin.

So far, they don't all see eye-to-eye with the G-7 nations on the war in Ukraine or sanctions. Scholz told Germany's ZDF television that "it's all the more important that we discuss (the matter) with each other." Scholz told Germany's ZDF television: "We must not walk into the trap Putin sets of asserting that the world is divided into the global West - the G-7 and its friends in the north - and all the rest. That's not true. There are democracies all over the world and they have very similar perspectives." Scholz didn't give an explicit commitment to turn up to the G-20 summit regardless of whether Putin attends, but stressed the group's importance.

He said: "There is a common conviction . that we don't want to torpedo the G-20."

President Joe Biden is set to announce that the US is providing an advanced surface-to-air missile system to Ukraine, as well as additional artillery support, according to a person familiar with the matter, in the latest assistance meant to help the country defend against Russia's four-month invasion.

The US is purchasing NASAMS, a Norwegian-developed anti-aircraft system, to provide medium- to long-range defence, according to the person, who spoke on the condition of anonymity. NASAMS is the same system used by the US to protect the sensitive airspace around the White House and US Capitol in Washington.

Additional aid includes more ammunition for Ukrainian artillery, as well as counter-battery radars, to support its efforts against the Russian assault in the Donbas, the person said.

The announcement comes as Biden is huddling with allies this week on supporting Ukraine in meetings at the Group of Seven advanced economies summit in Germany and NATO leaders' annual gathering in Madrid.

One year ago, Joe Biden strode into his first Group of Seven summit as president and confidently told the closest US allies that "America is Back." Now, there are worries that America is backsliding. As Biden meets this week with the heads of G-7 leading democratic economies in the Bavarian Alps, he brings with him the baggage of domestic turmoil.

The US is grappling with political unrest, shocking mass shootings and the US Supreme Court's decision to end constitutional protections for abortion.

Biden says other world leaders at the summit haven't been asking him about the abortion ruling. But the domestic unrest is no doubt troubling to his European allies.

Leaders of the Group of Seven economic powers are set to commit themselves to the long haul in supporting Ukraine as they meet in the German Alps and confer by video link with Ukrainian President Volodymyr Zelenskyy.

The G-7 leaders will begin Monday's session of their three-day summit with a focus on Ukraine. Later, they will be joined by the leaders of five democratic emerging economies - India, Indonesia, South Africa, Senegal and Argentina - for a discussion on climate change, energy and other issues.

The war in Ukraine was already at the forefront of the G-7 leaders' minds as they opened their summit at the secluded Schloss Elmau luxury hotel on Sunday - just as Russian missiles hit the Ukrainian capital, Kyiv, for the first time in weeks. 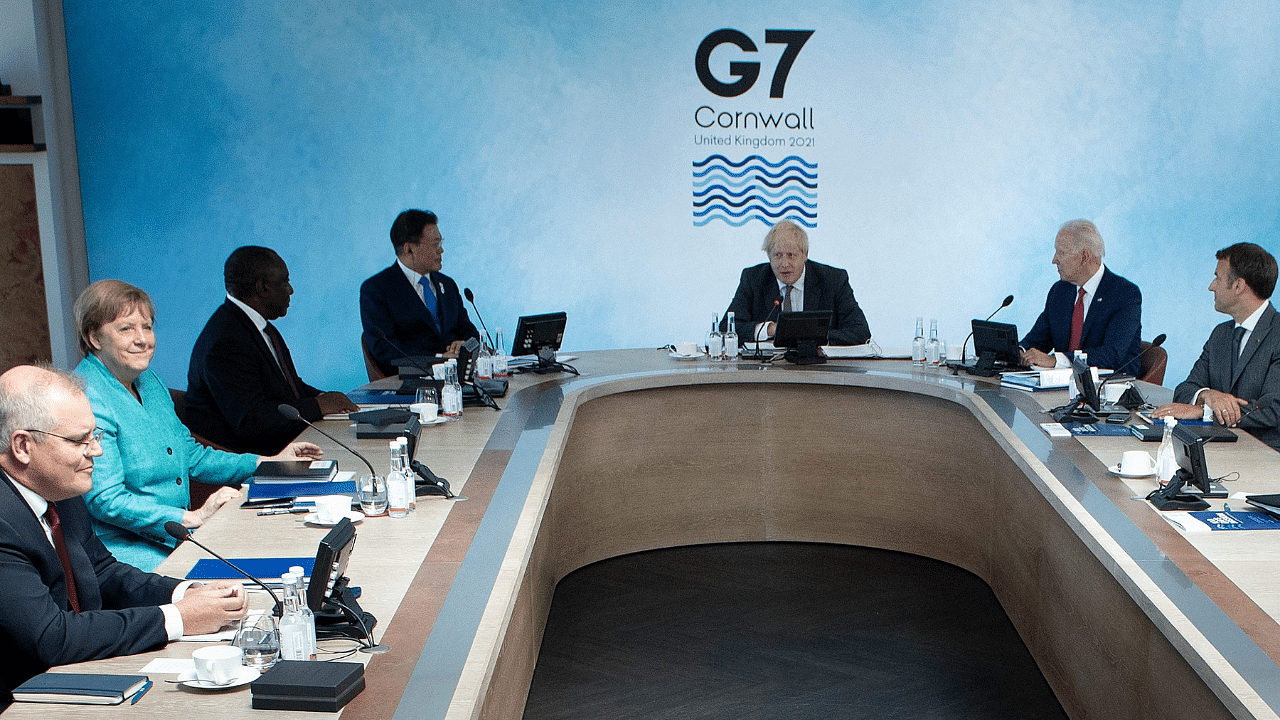