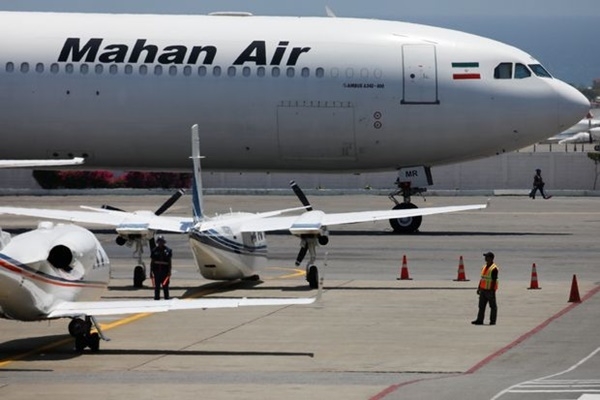 Washington D.C.: US has sanctioned China-based Shanghai Saint Logistics Limited accusing it of acting as a general sales agent (GSA) for or on behalf of Iranian airline Mahan Air.

"Today, the U.S. Department of the Treasury's Office of Foreign Assets Control (OFAC) is designating China-based Shanghai Saint Logistics Limited for acting as a general sales agent (GSA) for or on behalf of Iranian airline Mahan Air," said US Treasury Department.

"The Iranian regime is using Mahan Air to support an illegitimate and corrupt regime in Venezuela, just as it has done for the regime in Syria and for terrorist proxy groups throughout the Middle East," said Secretary Steven T. Mnuchin.

"We will not hesitate to target those entities that continue to maintain commercial relationships with Mahan Air." US Treasury Department alleged that Mahan Air is currently operating charter flights to Venezuela for Iranian technicians and technical equipment, using materials sourced from China.

"This scheme supports the illegitimate Maduro regime's efforts to revive its energy production, languished by its corruption and mismanagement," it said.

US Secretary of State, Mike Pompeo said: "This designation serves as another reminder that companies still providing services for Mahan Air - in the PRC or anywhere else - risk potential U.S. sanctions."

"The United States designated Mahan Air in 2011 under a counterterrorism authority for providing material support to Iran's Islamic Revolutionary Guard Corps - Qods Force (IRGC-QF) and again in 2019, under a weapons of mass destruction authority for shipping United Nations-restricted missile and nuclear items to Iran," he said.