US officials head to Turkey, aiming to resolve its opposition to Sweden, Finland joining NATO

Nato’s secretary general, Jens Stoltenberg, has repeatedly said the two countries would be welcomed “with open arms”, but their applications must be approved by all the alliance’s 30 members and Turkey seems set to throw a spanner in the works

Turkish President Recep Tayyip Erdogan arrives for a welcoming ceremony for his Algerian counterpart, Abdelmadjid Tebboune, in Ankara, Turkey, on Monday, May 16, 2022 | AP

With Turkish President Recep Tayyip Erdogan taking an increasingly tough line against the NATO membership bids of Finland and Sweden despite far less strident statements from some of his top aides, U.S. officials are trying to determine how serious the often mercurial leader is and what it might take to get him to back down.

US Secretary of State Antony Blinken will meet with Turkish Foreign Minister Mevlut Cavusoglu in New York on Wednesday.

Amid the contradictory signals from Ankara over the expected applications, U.S. Secretary of State Antony Blinken will meet his Turkish counterpart on Wednesday in New York in a new effort to clarify Ankara’s position after previous attempts appear to have only clouded the situation.

Underscoring the sensitivity of the delicate diplomacy required to deal with a potentially recalcitrant ally, the Biden administration seems to have taken to ignoring Erdogan saying he cannot allow the two nations to join NATO due to their alleged support for groups Turkey sees as security threats. Instead, the administration is focusing on remarks made in closed-door meetings by lower-ranking Turkish officials.

“It is not for us to speak for the Turkish government,” State Department spokesman Ned Price said repeatedly on Tuesday in response to multiple questions about what the U.S. understands Turkey’s position to be and whether Turkey had demanded anything from the United States in return for agreeing to Finland’s and Sweden’s memberships.

At stake for the United States and its NATO partners is an opportunity to respond to Russia’s invasion of Ukraine by strengthening and expanding the alliance — the very opposite of what President Vladimir Putin hoped to achieve in starting the war.

But Erdogan’s suggestions that he could derail Sweden’s and Finland’s membership hopes also highlight a potential weakness that Putin has tried to exploit in the past — the unwieldy nature of the consensus-run alliance where a single member can block actions supported by the other 29.

Earlier, Turkish President Erdogan said the two Nordic nations should not bother sending delegations to convince Turkey, a key Nato member, of their bids. He was extremely critical of what he saw as their willingness to host Kurdish militants.

Without the support of all Nato members, Sweden and Finland cannot join the military alliance.

On Monday, Sweden said Europe was living in a dangerous new reality, referring to Russia's invasion of Ukraine.

Russian President Vladimir Putin said the move by Finland and Sweden to join the 30-member military alliance did not threaten Moscow directly - but stressed that any expansion of military infrastructure would trigger a response from the Kremlin.

Nato’s secretary general, Jens Stoltenberg, has repeatedly said the two countries would be welcomed “with open arms”, but their applications must be approved by all the alliance’s 30 members and Turkey seems set to throw a spanner in the works.

Ankara has said it will not support the bids, citing Sweden and Finland’s history of hosting members of Kurdish militant groups and decisions in 2019 to impose arms export embargos on Ankara over Turkey’s military operations in Syria.

Niinistö said in an address to Swedish MPs on Tuesday that Turkey’s stance had “changed very quickly and become harder during the last few days”, but he was sure “constructive discussions” would resolve the situation.

The Finnish president said his Turkish counterpart, Recep Tayyip Erdoğan, had backed the applications when they spoke a month ago, but in the past week “he has said, ‘not favourable’. We have to continue our discussion. I am optimistic.”

Andersson said Sweden was “looking forward to having a bilateral dialogue with Turkey. I see when both Sweden and Turkey are members of Nato, there are also opportunities to develop bilateral relations between our countries.”

Having been dropped from the F-35 advanced fighter jet development program after buying a Russian air defense system, Turkey has been pressing the U.S. to sell it new F-16 fighters or at the very least refurbish its existing fleet.

Discussions on both issues are taking place in Washington this week and some officials believe that while they are unrelated to the NATO enlargement question, resolutions to either could help persuade Erdogan to drop his objections. 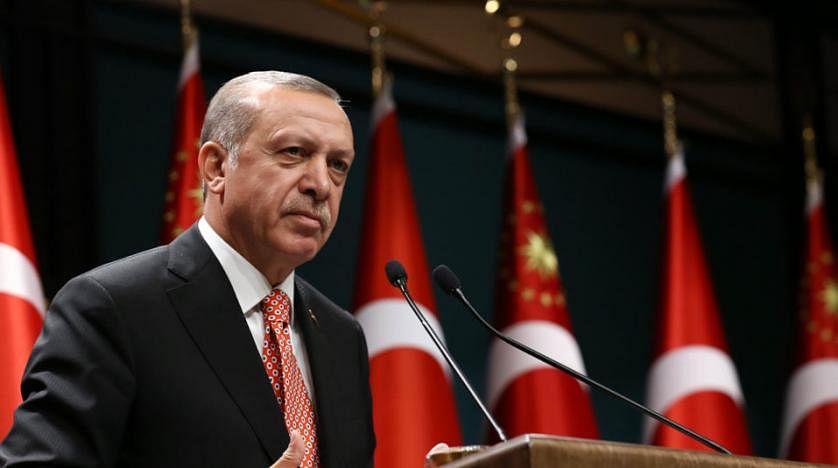