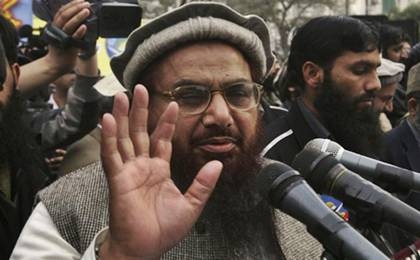 New York: The United Nations Security Council (UNSC) has approved a request by Pakistan to allow global terrorist Hafiz Saeed to access his bank accounts for 'basic expenses' to help his family.

In a letter dated August 15, the UN Sanctions Committee said it had received a letter from Pakistan seeking permission to allow Saeed "certain expenditure" from his frozen bank account. The Chair said that the request was approved after "no objection" had been received from any member.

"The chair has the honour to refer to his draft letter to the Islamic Republic of Pakistan communicating the committee's decision with respect to the intention of the Pakistani authorities to authorise certain expenditures to the benefit of Hafiz Muhammad Saeed (QDi.236), Haji Muhammad Ashraf (QDI.265) and Zafar Iqbal (QDI.308) to cover basic expenses, as specified in the note verbale of the Islamic Republic of Pakistan pursuant to paragraph 81 (a) of resolution 2368 (2017)," the letter read.

"The chair wishes to inform the members that no objections were placed by the set dateline of 15 August 2019 at 3:00 p.m. for the consideration of the draft letter. Consequently, the letter is approved, and the chair will instruct the Secretariat to dispatch it," it added.

Pakistan, which has time and again proven to be a safe haven for global terrorists, has based its request by outlining the monthly expenses requirement of Jammat-ud Dawah (JuD) chief Saeed, who it claims, has to support a family of four.

Being a proscribed terrorist, Saeed is subjected to comprehensive economic and trade sanctions such as arms embargoes, travel bans, and financial or commodity restrictions.

Saeed, who has been designated as global terrorists by the United States, the United Nations, and the European Union, was the mastermind behind the 26/11 terror attack that claimed the lives of 166 people.