The General Assembly, by a two-thirds majority of the members present and voting, "may suspend the rights of membership in the Council of a member of the Council that commits gross and systematic violations of human rights"

United Nations: The UN General Assembly will vote Thursday on a draft resolution seeking to suspend Russia from the UN Human Rights Council, a move initiated by the US after harrowing images emerged of corpses strewn across streets of the Ukrainian city Bucha, with Washington terming Moscow's participation in the top human rights body as a "farce".

The UNGA will resume its Emergency Special Session on Thursday after a request from Antigua and Barbuda, Canada, Colombia, Costa Rica, Georgia, Japan, Liberia, Republic of Moldova, Ukraine, the UK, the US and the Head of the Delegation of the European Union, on behalf of 27 members of the EU bloc.

The Assembly will vote on a draft resolution that will decide to "suspend the rights of membership in the Human Rights Council of the Russian Federation".

The Human Rights Council consists of 47 member states, elected directly and individually by secret ballot by the majority of the members of the General Assembly.

The General Assembly, by a two-thirds majority of the members present and voting, "may suspend the rights of membership in the Council of a member of the Council that commits gross and systematic violations of human rights". Abstentions do not count and the resolution requires two-thirds of yes/no votes to be adopted.

The draft resolution titled 'Suspension of the rights of membership of the Russian Federation in the Human Rights Council' notes the Human Rights Council resolution of March 4, 2022, in particular its grave concern regarding reports of "gross and systematic violations and abuses of human rights" and "violations of international humanitarian law" committed by Russia during its aggression against Ukraine.

It recognises strong expressions of concern in statements by UN Secretary General Antonio Guterres and by the High Commissioner for Human Rights Michelle Bachelet.

Earlier this week in Romanian capital Bucharest, US Ambassador at UN Linda Thomas-Greenfield had told reporters that Washington, in close coordination with Ukraine, European countries and other partners at the UN, was going to seek Russia's suspension from the UN Human Rights Council.

"Russia should not have a position of authority in that body, nor should we allow Russia to use their role on the Council as a tool of propaganda to suggest they have a legitimate concern about human rights.

"In fact, we see every day, including yesterday, heartbreaking reports about how little they care about human rights. Russia's participation on the Human Rights Council is a farce. It hurts the credibility of the Council and the UN writ large. And it is simply wrong. Which is why we believe it is time for the UN General Assembly to suspend them," she said.

Russia has warned countries at the United Nations that a yes vote or abstention on a U.S. push to suspend Moscow from the Human Rights Council will be viewed as an "unfriendly gesture" with consequences for bilateral ties, according to a note seen by Reuters on Wednesday.

The United States said on Monday it would seek Russia's suspension after Ukraine accused Russian troops of killing hundreds of civilians in the town of Bucha.

Since Russia's military operation started on February 24, the Assembly has adopted two resolutions decrying Moscow's actions, with 140 votes in favor. India and China have abstained on both.

"My message to those 140 countries who have courageously stood together is: the images out of Bucha and devastation across Ukraine require us to now match our words with action," Thomas-Greenfield said.

In New York, Russia's ambassador to the United Nations, Vassily Nebenzia, said the attempt to suspend Russia from the council was "unbelievable," adding that it would not help the peace talks.

"This is again unprecedented and this will not facilitate or encourage or be helpful to what is happening between Russia and the Ukrainian peace talks," Nebenzia said at a press conference.

He repeated Moscow denials of Ukraine's accusations that its forces killed civilians in Bucha, claiming the footage presented was "staged." Sine then satellitte imagery has emerged that shows bodies on the streets of Bucha before Russian troops evacuated.

Read Also
Ukraine says over 5,000 civilians killed by Russia in city of Mariupol 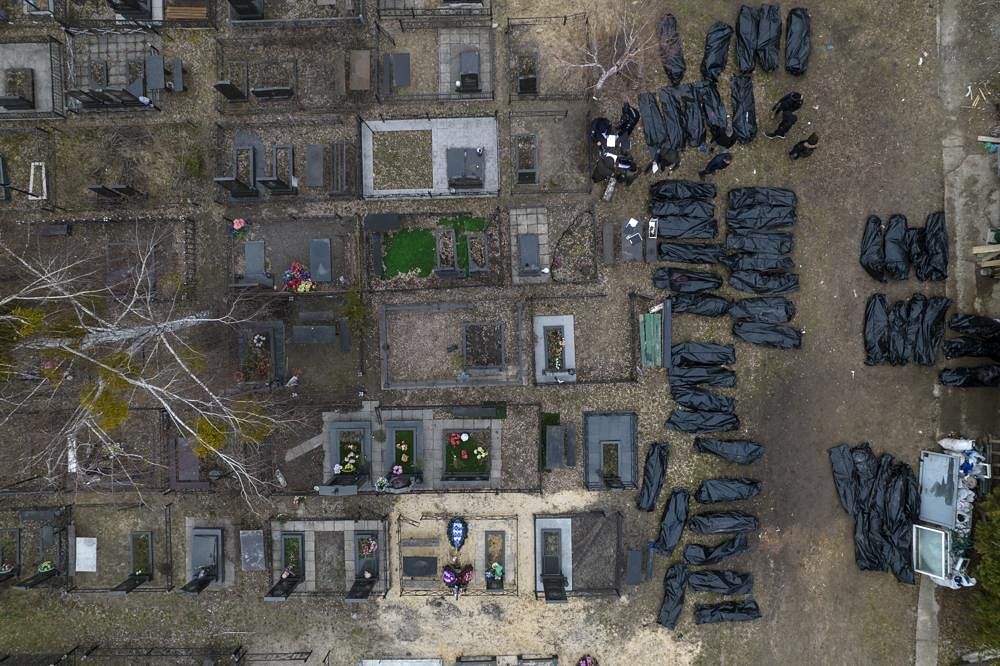