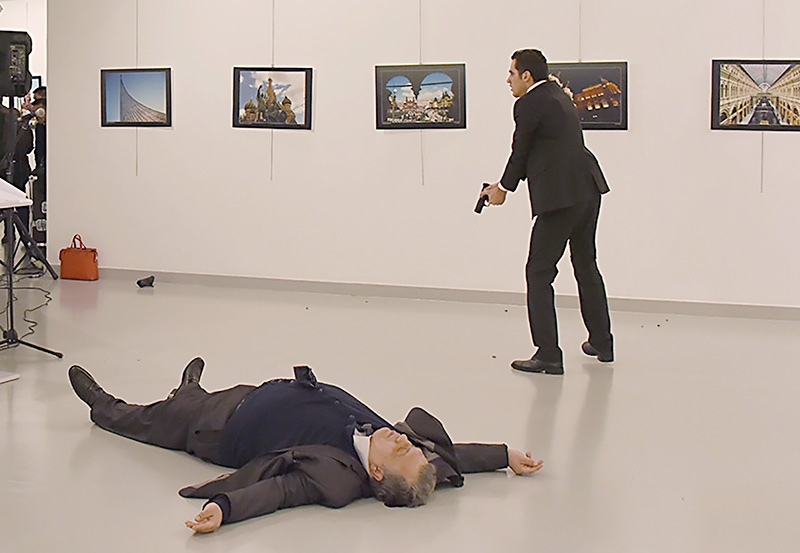 This picture taken on December 19, 2016 shows Andrey Karlov (L), the Russian ambassador to Ankara, lying on the floor after being shot by a gunman (R) during an attack during a public event in Ankara. A gunman crying "Aleppo" and "revenge" shot Karlov while he was visiting an art exhibition in Ankara on December 19, witnesses and media reports said. The Turkish state-run Anadolu news agency said the gunman had been "neutralised" in a police operation, without giving further details. / AFP PHOTO / Sozcu daily / Yavuz Alatan / Turkey OUT |

Istanbul : Turkish authorities were on Wednesday looking into claims the alleged mastermind of the failed July coup was involved in the assassination of Moscow’s ambassador, but the Kremlin warned against jumping to conclusions, reports AFP.

Monday’s murder of Andrei Karlov stunned Russia and prompted warnings of retribution from the Kremlin. But both sides responded by vowing to step up cooperation, particularly on the Syria conflict.

Off-duty Turkish policeman Mevlut Mert Altintas, 22, pumped nine bullets into Karlov at an art gallery in Ankara before he himself was killed by police in a shootout.

The pro-government press has repeatedly said that US-based Islamic preacher Fethullah Gulen, who Ankara blames for the attempted putsch, was behind the assassination plot.

And Turkish Foreign Minister Mevlut Cavusoglu told US counterpart John Kerry in a phone call on Tuesday that Ankara believed Gulen was involved.

“Turkey and Russia know that behind the attack… there is FETO,” his ministry quoted Cavusoglu as saying, using Turkey’s acronym for Gulen’s organisation. Gulen, who has lived in self-imposed exile in the United States since 1999, has strongly condemned the assassination.

Media reports said that books on Gulen’s organisation were found at Altintas’ home, while thorough checks are being made of his acquaintances at school and the police academy he attended.

Thirteen people, including close family members, have been detained over the killing and are being investigated for possible links to Gulen.

Turkey and Russia are jointly investigating the murder after an agreement between Erdogan and Russian President Vladimir Putin. A team of 18 Russian investigators arrived in Ankara yesterday and spent the day at the crime scene after also witnessing the autopsy. The Kremlin indicated it was not the time for hurried pronouncements on responsibility.

“In this case it is hardly worth hurrying to any conclusions until the investigation determines – as our president said – who was behind the murder of our ambassador,” Kremlin spokesman Dmitry Peskov told reporters.