The clashes are the second consecutive day of violence in a city reeling from weeks of anti-government protests that show no sign of abating.
Agencies 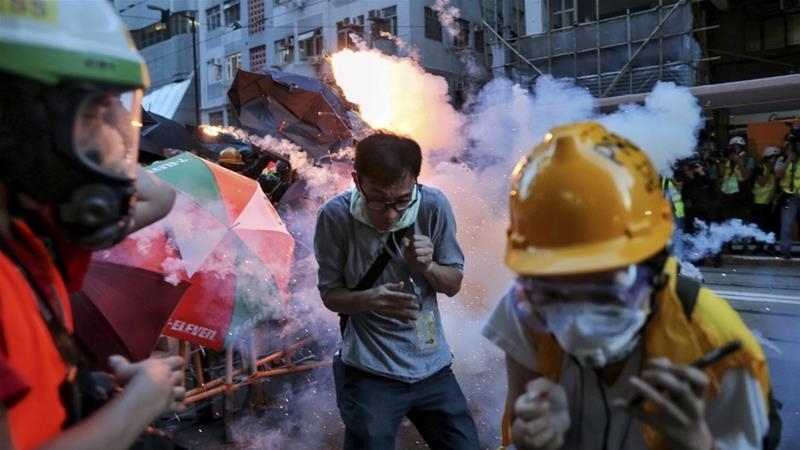 The clashes are the second consecutive day of violence in a city reeling from weeks of anti-government protests that show no sign of abating.

Sunday's melees took place in a well-heeled residential district close to the Liaison Office, which represents Beijing in the semi-autonomous hub and which was pelted with eggs and paint last week.

Police and protesters had been engaged in a tense standoff for hours after tens of thousands of demonstrators held a series of unsanctioned marches through the city.

A group of some 200 protesters had made their way towards the Liaison Office in Sheung Wan district where they met a phalanx of riot police who used loudhailers calling for the crowds to end their "illegal assembly".

Eventually, tear gas and rubber bullets were fired at demonstrators who responded with volleys of bricks and stones as baton-wielding riot police charged and pushed the crowds back down the street.

AFP reporters saw officers from the police's elite "Raptor" squads making multiple arrests. Two journalists were seen receiving medical treatment after being injured, while at least one protester was seen with blood streaming down his face.

A second, larger crowd massed in the popular shopping district of Causeway Bay, where they built barricades and took over a main thoroughfare but there appeared to be little police presence there.

The renewed violence comes a day after a town near the border with mainland China descended into chaos as police fired tear gas and rubber bullets at protesters holding another banned rally against suspected pro-government triad gangs who beat up democracy demonstrators there last weekend.

Despite facing unprecedented levels of public anger and frustration, the city's pro-Beijing leadership are seemingly unable, or unwilling, to end the chaos.

HK has been plunged into its worst crisis in recent history after millions of demonstrators took to the streets and sporadic violent confrontations erupted between police and pockets of hardcore protesters.