The Milky Way black hole is called Sagittarius A*, near the border of Sagittarius and Scorpius constellations. It is 4 million times more massive than our sun. The image was made by eight synchronized radio telescopes around the world

This image released by the Event Horizon Telescope Collaboration, on Thursday, May 12, 2022, shows a black hole at the center of our Milky Way galaxy | AP
Follow us on

The world’s first image of the chaotic supermassive black hole at the center of our Milky Way galaxy doesn’t portray a voracious cosmic destroyer but what astronomers Thursday called a “gentle giant” on a near-starvation diet.

Astronomers believe nearly all galaxies, including our own, have these giant black holes at their bustling and crowded center, where light and matter cannot escape, making it extremely hard to get images of them. Light gets bent and twisted around by gravity as it gets sucked into the abyss along with superheated gas and dust. The colorized image unveiled Thursday is from an international consortium behind the Event Horizon Telescope, a collection of eight synchronized radio telescopes around the world. Getting a good image was a challenge; previous efforts found the black hole too jumpy.

The black hole itself, known as Sagittarius A*, cannot be seen because no light or matter can escape its gravitational grip. But its shadow is traced out by a glowing, fuzzy ring of light and matter that is swirling on the precipice at close to the speed of light.

The latest observations also appear to show that our black hole’s angle of rotation is not neatly aligned with the galactic plane, but is off-kilter by about 30 degrees, and hint at spectacular magnetic activity similar to that seen in the sun’s atmosphere. Beyond the science, astronomers acknowledged an emotional connection with finally seeing the enigmatic object about which our home galaxy revolves.

It's their second such image after releasing in 2019 a picture of the giant black hole at the heart of another galaxy called Messier 87, or M87. That object was more than a thousand times bigger at 6.5 billion times the mass of our Sun. Sagittarius A* is relatively small, meaning that the dust and gas in its accretion disc orbit in a matter of minutes rather than weeks, creating a moving target from one observation to the next.

Markoff compared the observations with trying to photograph a puppy chasing its tail using a camera with a slow shutter speed. Scientists also had to peer through the galactic plane and filter out intervening stars and dust clouds from their images. Some combination of these factors – and possibly some extreme black hole phenomenon – explain the bright blobs in the image. 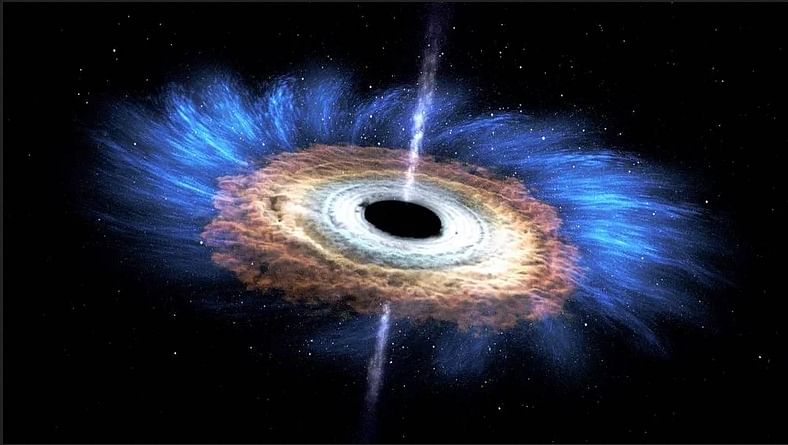