Sully, 3-year-old labrador assisted Bush during the last six months of his life before the 41st US President passed in November 2018 at age 94.
Seema Hakhu Kachru 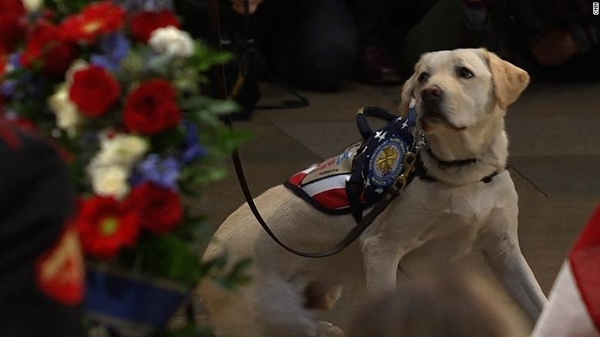 Sully, 3-year-old labrador assisted Bush during the last six months of his life before the 41st US President passed in November 2018 at age 94. The dog became famous after he was photographed next to Bush's casket last December.

The bronze statue of Sully was created by artist Susan Bahary and it will go on display on December 6 in George Bush Presidential Library and Museum in College Station, Texas as part of the memorial exhibit.

"On Dec. 6, a bronze, life-size statue of Sully will be on display in the Fidelity corridor as a part of the memorial exhibit. Stop by and see the amazing work of Susan Bahary, provided by America's VetDogs. @AmericasVetDogs Bahary Studios," the museum tweeted.

The monument will be unveiled on December 2 in the museum, according to America's VetDogs, which commissioned the statue and trains service dogs for disabled veterans.

After his presidential service, Sully was assigned to the Walter Reed National Military Medical Center.