South African President Cyril Ramaphosa on Friday said he has dispatched his police minister and premier of KwaZulu Natal province to a township in Durban amid escalating tensions between the Indian and Black African communities there.

The tensions between the two communities in the Indian township of Phoenix and surrounding areas have been sparked by social media posts in which there are calls for action against each other's communities following the violence over the arrest of former President Jacob Zuma on July 7.

Ramaphosa was briefly in Ethekwini, a metropolitan municipality that includes the city of Durban and surrounding towns, to assess the situation following the continuing violence and looting in the region.

However, he did not visit the suburbs of Phoenix and Pietermaritzburg, the provincial capital of KwaZulu-Natal, that have been most affected.

Durban is the largest city in the KwaZulu-Natal province.

Ramaphosa asked police minister Bheki Cele and Premier of KwaZulu Natal province Sihle Zikalala to go to these areas to address the situation.

"The Minister of Police was on his way to Phoenix. Our local leaders - the Premier, the MEC's (Members of the Executive Committee of the City) are going to have to deal with that type of situation," the president said.

"I wanted to go myself, but time now is of the essence. We are going to have a Cabinet meeting later, so I'm going to have to go back to Gauteng (province), but I'm here now, encouraging and holding the hands of both our people on the ground and also directing the security forces and getting them to go to those areas that are volatile at the moment," Ramaphosa said.

Concerned over the widespread violence and rioting in South Africa, India's External Affairs Minister S Jaishankar on Wednesday spoke with his South African counterpart Naledi Pandor who assured him that her government was doing utmost to enforce law and order and an early restoration of normalcy was the overriding priority.

Phoenix and Chatsworth are the two sprawling townships created to forcibly rehouse the thousands of Indian citizens of the region under the draconian apartheid-era policy of separate development. Phoenix is now surrounded by several Black African townships.

There has also been widespread social media sharing of edited posts of Ethekwini Mayor Mxolisi Kaunda which were manipulated to create a highly inflammatory message suggesting that he was calling for Indians to be killed.

In the original post, Kaunda quoted someone else to call for all to reject the message and exercise restraint, appealing for calm to prevail.

"We are continuing a series of engagements with communities, especially where the issues of racial tension have been cited," Kaunda said.

Kaunda said that besides Phoenix, there were also initiatives in other areas of the city, including the huge Indian suburb of Chatsworth, south of the city.

Meanwhile, images of some Indian residents of Phoenix, many heavily armed, who claim to be protecting their lives and property and making inflammatory anti-Black remarks, have been flashed on social media, getting fellow incensed residents to join vigilante groups.

But some groups have pointed out that a few rogue vigilante elements in the community, who were receiving huge publicity while making racist remarks and threats to African people, have been tainting the efforts of many others who have mobilised to protect their assets and stop looters.

"The community members who have come forward to work lawfully alongside security forces for this purpose have even been publicly lauded by both President Ramaphosa this morning and the Minister of Police yesterday," said Shaun Naidoo, who was speaking on behalf of a group controlling access at one of the entry points into Phoenix.

"This small group of rogues in both the Indian and African communities are misusing the looting and rioting situation and unfortunately this is now getting the entire communities very angry, flaring up into the explosive situation that we now find ourselves in," said Abdul Khan, who was also part of the group.

Police minister Cele said he was confident that with the deployment of soldiers, law and order would be restored in Phoenix.

Cele attributed the situation to criminals and not to those who are protesting the imprisonment of former president Zuma, which sparked the initial mass action that quickly devolved into massive looting and arson across the country.

Zuma started a 15-month sentence last Wednesday after the country's Apex court found him guilty of contempt of court as he refused to appear before the Commission of Inquiry into State Capture, where he has been repeatedly accused of involvement in corruption by witnesses. 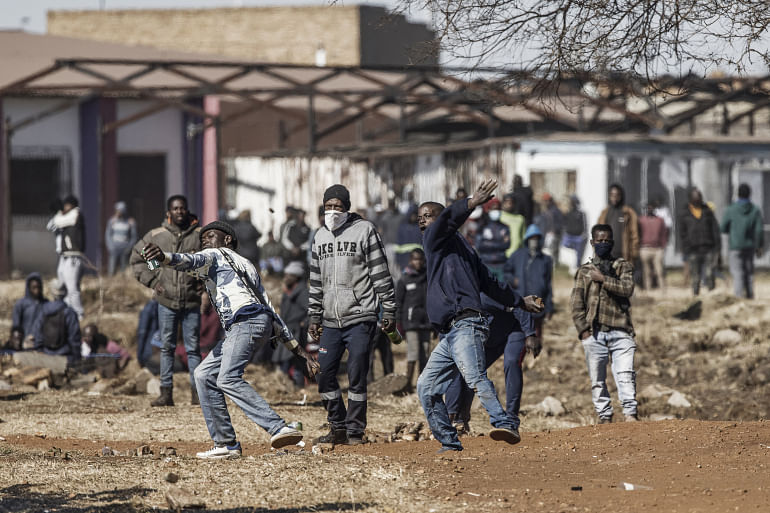