Russia has consistently claimed that it hits only targets with military values. It has denied war-crimes allegations and claimed that the Bucha corpses were falsified as a “provocation”

Injured Natalia Rudneva, 59, reacts as her son was hospitalised after night shelling in Kramatorsk, Ukraine, on Thursday, May 5, 2022 | AP
Advertisement

Kyiv (Ukraine): Amnesty International says it has documented extensive war crimes by Russian forces in communities around the Ukrainian capital, Kyiv, including arbitrary executions, bombardments of residences and torture.

“The pattern of crimes committed by Russian forces that we have documented includes both unlawful attacks and willful killings of civilians,” Agnes Callamard, Amnesty International’s Secretary General, said in a statement on Friday. “It is vital that all those responsible, including up the chain of command, are brought to justice.”

The organization said it collected evidence and testimony in eight cities near Kyiv, including Bucha. After Russian forces retreated from Bucha in April, corpses were found lying on streets, many with their hands bound behind their backs, and in mass graves. Kyiv regional governor Oleksandr Pavlyuk said that at least 1,235 civilian bodies have been found in the region.

Russia has consistently claimed that it hits only targets with military values. It has denied war-crimes allegations and claimed that the Bucha corpses were falsified as a “provocation.”

AI’s report described the shooting in Bucha of Yevhen Petrashenko, a 43-year-old sales manager, who was shot in his kitchen while his wife and children were hiding in the basement. The Russian military allowed his wife, Tatiana, to enter the apartment, where she found her husband’s corpse.

“Yevhen was lying dead in the kitchen. He had been shot in the back, (near his) lungs and liver. His body remained in the apartment until 10 March, when we were able to bury him in a shallow grave in the courtyard,” the report quoted her as saying.

Their neighbor Leonid Bodnarchuk, a 44-year-old construction worker, was shot dead by Russian soldiers as he climbed the stairs, and then the military threw a grenade into the stairwell, the report said.

The executions in Bucha were carried out with specialized rifles used by some elite Russian units, the report said. Amnesty International staff found 7N12 armor-piercing rounds with a 9x39mm black tip at the murder scene, which are used by elite units of the Russian army.

The investigation also described bombardment of the city of Borodyanka, in which at least 40 people were killed in indiscriminate bombings that destroyed eight residential buildings.

It quoted Borodyanka resident Vasyl Yaroshenko as saying he had left his multi-story residence for his garage when a bomb hit the house.

“I saw a large gap in the building,” he said, according to the report. “My wife Halina was among those killed. I still see her by the door of our apartment, the home where we lived for 40 years.”

The report says researchers found evidence documenting specific units of the Russian army that were involved, including training books that belonged to the driver of the 104th regiment of the Airborne Forces.

“We have met families whose loved ones were killed in horrific attacks, and whose lives have changed forever because of the Russian invasion,” Callamard said. “We support their demands for justice, and call on the Ukrainian authorities, the International Criminal Court and others to ensure evidence is preserved that could support future war crime prosecutions.” 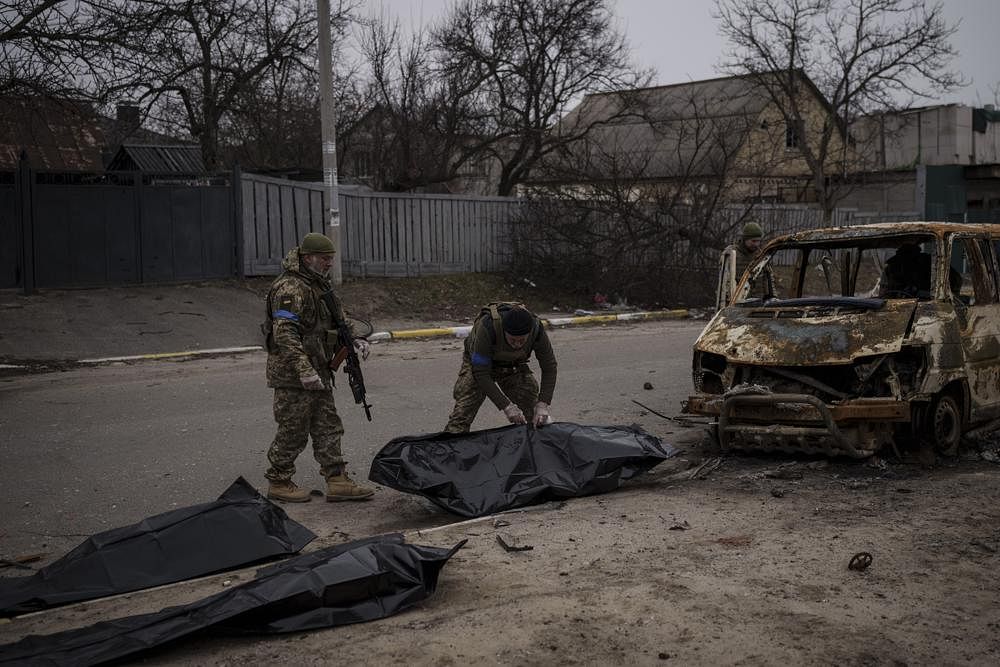 US, allies say will impose new sanctions on Russia after Bucha 'war crimes'