Moscow-backed separatists have been fighting Ukrainian forces for eight years in the mostly Russian-speaking Donbas and have declared two independent republics that have been recognized by Russia. Russia has declared the capture of the Donbas to be its main goal in the war since its attempt to seize the capital, Kyiv, failed

Russian military vehicles move on a highway in an area controlled by Russian-backed separatist forces near Mariupol, Ukraine, on Monday, April 18, 2022 | AP
Advertisement

Russian forces attacked along a broad front in eastern Ukraine on Tuesday as part of a full-scale ground offensive to take control of the country’s eastern industrial heartland in what Ukrainian officials called a “new phase of the war.”

“The occupiers made an attempt to break through our defenses along nearly the entire frontline,” the General Staff said in a statement.

The stepped-up assaults began Monday along a front of more than 300 miles (480 kilometers), focused on the Donbas regions of Donetsk and Luhansk, with the Russian forces trying to advance in several sections, including from neighboring Kharkiv.

In southern Donetsk, the General Staff said the Russian military has continued to blockade and shell the strategic port city of Mariupol and fire missiles at other cities.

"We can now confirm that Russian troops have begun the battle for the Donbas, which they have been preparing for a long time. A large part of the Russian army is now dedicated to this offensive," he said on Telegram.

"No matter how many Russian troops are driven there, we will fight. We will defend ourselves. We will do it every day,” vowed Zelensky.

Earlier Monday, Zelensky's chief of staff said the "second phase of the war” had begun but expressed optimism in the outcome. "Believe in our army, it is very strong," chief of staff Andriy Yermak wrote on the Telegram messaging app.

"They began their attempt to start the active phase this morning," he said. "Fortunately, our military is holding on," he added

Russian troops on Monday captured the eastern Ukraine town of Kreminna, local authorities said, as Kyiv's armed forces launched salvoes on Russian forces in the nearby settlement of Rubizhne.

"There was a major attack in the night" from Sunday to Monday in Kreminna, said Luhansk's regional governor, Sergiy Gaiday, in a statement on social media.

"The Russian army has already entered there, with a huge amount of military hardware ... Our defenders have retreated to new positions," he added.

Four civilians had died as they tried to flee Kreminna, said Gaiday.

The Donbas is Ukraine’s primarily Russian-speaking industrial heartland in the east, where Moscow-backed separatists have been fighting Ukrainian forces for the past eight years. Pro-Russian leaders there have declared two independent republics, which Russia recognised before launching its invasion of Ukraine on February 24.

In recent weeks, the Kremlin declared the capture of the Donbas its main goal of the war after its attempt to storm Kyiv failed. After withdrawing from the capital, Russia began regrouping and reinforcing its ground troops in the east for an all-out offensive.

“It’s hell. The offensive has begun, the one we’ve been talking about for weeks,” Serhiy Hadai, the regional military administrator for Luhansk, wrote on Facebook. “There’s constant fighting in Rubizhne and Popasna, fighting in other peaceful cities.”

In Kreminna, heavy artillery fire set seven residential buildings on fire and targeted the sports complex where the nation’s Olympic team trains, he said, telling Ukrainian television later that Russians took control of the city after “levelling everything to the ground”.

“The Russian army has already entered there, with a huge amount of military hardware … Our defenders have retreated to new positions,” he added.

Ukrainian media also reported a series of explosions, some powerful, along the front line in the Donetsk region, with shelling taking place in Marinka, Sloviansk and Kramatorsk. Ukrainian local officials and local media said additional explosions were heard in Kharkiv in the northeast of Ukraine, Mykolaiv in the south and Zaporizhzhia in the southeast.

The bombardment has left former tourist towns in the east bracing for a military onslaught. The Ukrainian military says the main focus of Russian troops is to break through Ukrainian army defences in the Luhansk and Donetsk regions. 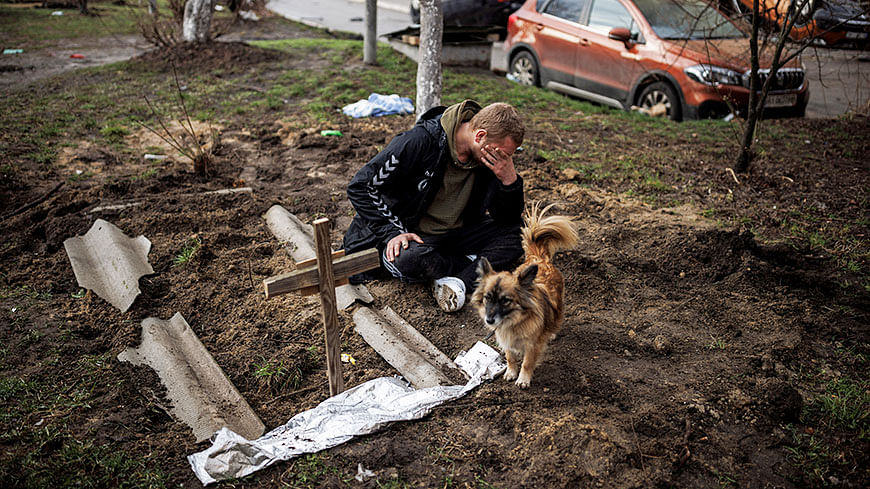 'Battle for the Donbas has begun': Ukraine President Zelensky