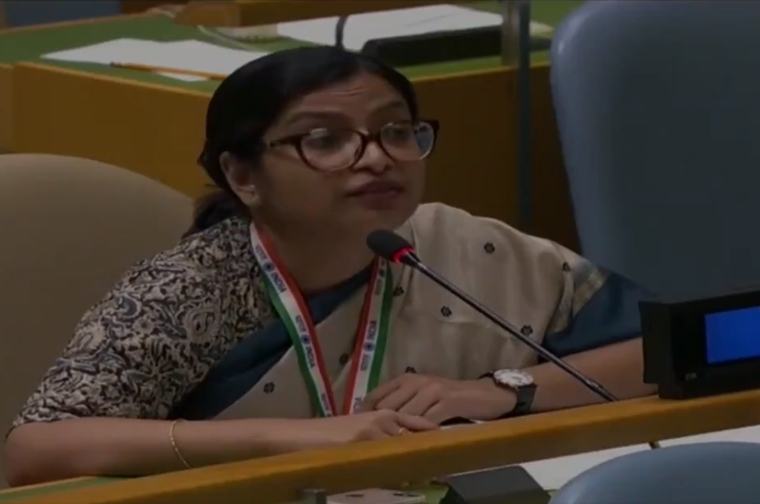 India's right to reply comes after Khan in his maiden at the 74th UNGA session made an attempt to "sharpen differences and stir up hatred". Exercising India's right to reply to Khan's speech, First Secretary MEA Vidisha Maitra said that Pakistan's "virulent reaction" over the abrogation of Article 370 depicts that "those who thrive on conflict never welcome the ray of peace".

She said, "I take the floor to exercise India's right of reply to the statement made by the Prime Minister of Pakistan. Every word spoken from the podium of this august Assembly, it is believed, carries the weight of history." "Unfortunately, what we heard today from Prime Minister Imran Khan of Pakistan was a callous portrayal of the world in binary terms. Us vs Them; Rich vs Poor; North vs South; Developed Vs Developing; Muslims vs Others. A script that fosters divisiveness at the United Nations. Attempts to sharpen differences and stir up hatred are simply put - hate speech," she continued.

While Pakistan representative was seen carefully taking notes, Maitra addressed Prime Minister with his full name, Imran Khan Niazi. "Prime Minister Khan's threat of unleashing nuclear devastation qualifies as brinkmanship, not statesmanship," Maitra said. "Pakistan's virulent reaction to the removal of an outdated and temporary provision thatwas hindering development and integration of the Indian state of Jammu and Kashmir stems from the fact that those who thrive on conflict never welcome the ray of peace," she added.

During his address, Khan warned of dire "consequences" in the event of a nuclear war with India over the Kashmir issue. "If a conventional war starts between the two countries anything could happen. A country seven times smaller than its neighbour what will it do -- either surrender or fight for its freedom," he had said in his maiden address to the UN General Assembly here that exceeded beyond the allotted time limit of between 15 to 20 minutes.

"My belief is we will fight and when a nuclear-armed country fights till the end it will consequence far beyond the borders. I am warning you. It's not a threat but worry about where are we heading. If this goes wrong you hope for the best but prepare for the worst," Khan said.