Sharif on Thursday filed a petition in the Lahore High Court seeking an order for the Imran Khan government to remove his name from the no-fly list or the Exit Control List (ECL).
FPJ Bureau 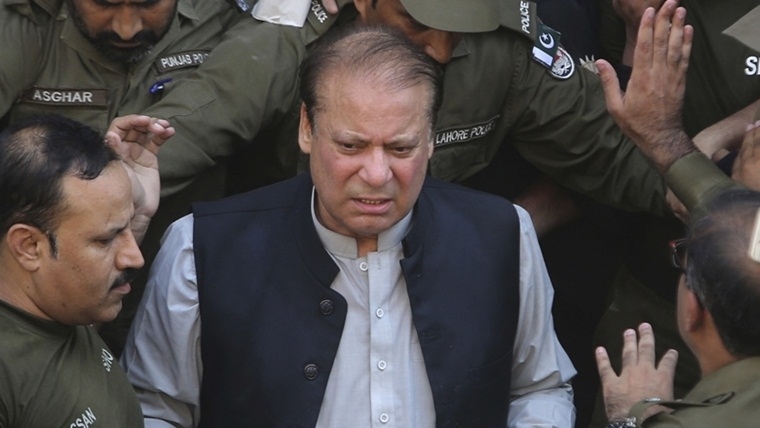 Lahore: A Pakistani court on Thursday sought a reply from the federal government and the National Accountability Bureau by Friday on a petition of former prime minister Nawaz Sharif challenging the condition of furnishing indemnity bond for the removal of his name from the no-fly list so that he could travel to the UK for his medical treatment.

Sharif on Thursday filed a petition in the Lahore High Court seeking an order for the Imran Khan government to remove his name from the no-fly list or the Exit Control List (ECL).

A two-member bench of the court headed by Justice Baqir Najfi sought para-wise comments from the Imran Khan government and the National Accountability Bureau (NAB) by Friday and adjourned the hearing till then.

On Wednesday the government granted one-time permission to Sharif for travel abroad for four weeks against submission of Rs 700 crore indemnity bonds.

The three-time prime minister and his PML-N party have refused to meet federal government's demand to submit indemnity bond worth Rs 700 crore for travel to the UK for treatment, saying it was "illegal" and denounced attempts to politicise his health.

Sharif, 69, is suffering from multiple health complications, including erratic platelet count, and is currently being treated at his residence near Lahore where an ICU has been set up.

"Nawaz Sharif's condition is very critical and he has to go abroad (London) for diagnosis and treatment of his disease," Shehbaz Sharif, Pakistan Muslim League-Nawaz (PML-N) president and the younger brother of Sharif, said, adding Prime Minister Khan is doing 'dirty politics' on the health of Sharif.

If this delay caused any harm to Sharif's health then Khan will be responsible for this, he said.

Shehbaz said Sharif had returned in July 2018 to the country to face jail. "Why any guarantee is needed to allow him to leave the country. This condition of 'political ransom' is not acceptable to us," he clarified.

He said: "The government's offer (to remove Sharif's name from the no-fly or the Exit Control List (ECL) is the worst example of the government's vendetta against the Sharif family. The government's conditional offer is unlawful, unconstitutional and is only a manifestation of Khan's vengeful and prejudicial mindset."

PML-N information secretary Marriyum Auranzeb said: "It is sad that the person who left his wife on death bed to return to face the courts, is being asked to fill surety bonds. The Pakistan Tehreek-e-Insaf (PTI) is trying to get illegal and unconstitutional ransom by exploiting the medical complications of an ill person.

The PTI regime is trying to act as supreme court which is a contempt of the judiciary. She said the doctors had recently given high dose of steroids to Sharif for his expected travel abroad which may have negative effects on his health, and all this has gone in vain because of the government's indecision.

"Nawaz Sharif's life is a sacred trust of the people of Pakistan and the PTI regime is jeopardising it with its criminal negligence through delaying tactics," she said.