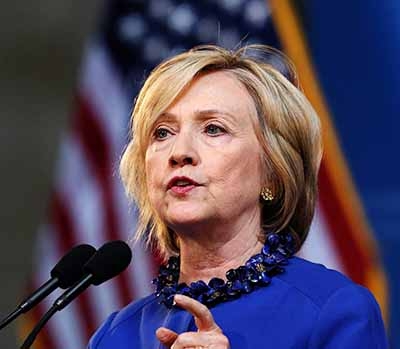 Former Secretary of State Hillary Clinton gave a strong clarion call to Americans to overwhelmingly vote in the 2020 presidential election to ensure that Donald Trump "can't sneak or steal his way to victory", warning that Trump's re-election will make things "even worse." "I wish Donald Trump had been a better president. Because America needs a better president than this," Clinton, who lost the 2016 presidential election to Trump, said in her remarks on Wednesday to the 2020 Democratic National Convention, being held virtually due to the COVID19 pandemic.

Clinton made a passionate plea to Americans to overwhelmingly vote in the November election, warning that Democratic nominees Joe Biden and Kamala Harris can still lose even if they win three million more votes, a reference to her own election run when she had won the popular vote by about three million votes but still lost the election to Trump, who won in the Electoral College.

"Remember: Joe and Kamala can win 3 million more votes and still lose. Take it from me. We need numbers so overwhelming Trump can't sneak or steal his way to victory," she said adding that Americans must also vote to make sure "we-not a foreign adversary-choose our president," alluding to allegations that Russia had meddled in the 2016 elections.

Urging everyone to cast their ballot, Clinton alluded to Trump's remarks in 2016 when he had said 'What do you have to lose?' "Well, now we know: our health, our jobs, even our lives. Our leadership in the world and, yes, our post office. As Michelle Obama and Bernie Sanders warned us on Monday: If Trump is re-elected, it will get even worse. My friends, we need unity now more than ever." Clinton said the 2020 election is not just about "getting one man" out of the White House but it will be a vote for job creation, emergency relief for small businesses and hardworking people, for parents struggling to balance their child's education and their safety, for health care workers fighting COVID-19 with no help from the White House, for law enforcement that serves and respects communities of colour and for justice for African-Americans like George Floyd and Breonna Taylor, killed by police officers.

The former first lady said that in the four years since the last election, people have told her that they didn't realise how "dangerous" Trump was and expressed regret over voting for him and not voting at all.

"This can't be another woulda-coulda-shoulda election. If you're voting by mail, request your ballot now, and send it back as soon as you can. If you vote in person, do it early. Bring a friend and wear a mask. Become a poll worker. Most of all, no matter what, vote. And convince everyone you know to vote," Clinton said.

She noted that while the nation owes Trump an open mind and the chance to lead when he won the 2016 elections, he has not put his own interests and ego aside.

"Yes, we Democrats would have disagreed with him on many, many things. But if he had put his own interests and ego aside...., if he had even tried to govern well and lead us all-he might have proved us wrong. And that would have been a good thing, for America and the world," she said.

Asserting that America needs a president who shows the same compassion, determination, and leadership in the White House that can be seen in US communities, Clinton said the US needs leaders equal to this moment.