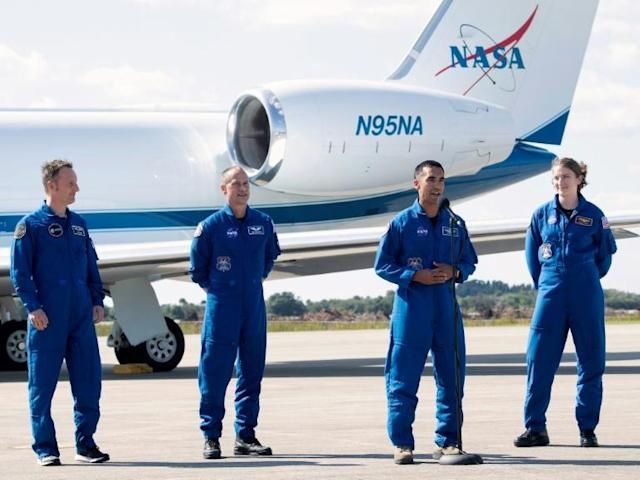 Four-member team who will fly to International Space Station on Sunday | Photo: AFP

In collaboration with Elon Musk's aerospace company SpaceX, NASA has chosen a four-member team of astronauts, including three-first flyers, to be sent on an exploration to the International Space Station (ISS). The mission will commence on Sunday.

The crew named "Crew-3" will be on a mission for six months on the orbital outpost, researching areas including material sciences, health, and botany, to help inform future deep space exploration and benefit life on Earth.

Americans Raja Chari, Tom Marshburn, and Kayla Barron as well as German Matthias Maurer of the European Space Agency (ESA) will launch aboard a Crew Dragon spacecraft named "Endurance," fixed atop a Falcon 9 rocket at 2:21 am (0621 GMT) from the Kennedy Space Center in Florida.

Out of the four-member team, only Tom Marshburn has flown to space before in 2009 and for another mission in 2012.

"Last night we got to go see Endurance in the hangar as they got ready to roll it out to the pad and put our hands on the Dragon, which is a pretty special experience," Chari, a US Air Force colonel who is commanding the mission, said at a press conference on Wednesday.

Barron, who along with Chari was selected for the NASA astronaut corps in 2017, the most recent recruitment, previously served as a submarine warfare officer for the Navy and told reporters she saw many parallels between that experience and going to space.

The pair are also in the mix for NASA's Artemis missions to return humans to the Moon later this decade. Maurer, a materials science engineer, will become the 12th German to go to space and will join fellow ESA astronaut Thomas Pesquet of France on the ISS, an overlap that will likely last a few days before the Frenchman returns to Earth with the rest of his Crew-2 colleagues.

The Crew-3 astronauts will also conduct spacewalks to complete the upgrade of the station's solar panels and will be present for two tourism missions including Japanese tourists aboard a Russian Soyuz spacecraft at the end of 2021, and the Space-X Axiom crew, set for launch in February 2022.

Crew-3 is part of NASA's multibillion-dollar partnership with SpaceX that it signed after ending the Space Shuttle program in 2011, to restore American capacity to carry out human spaceflight.