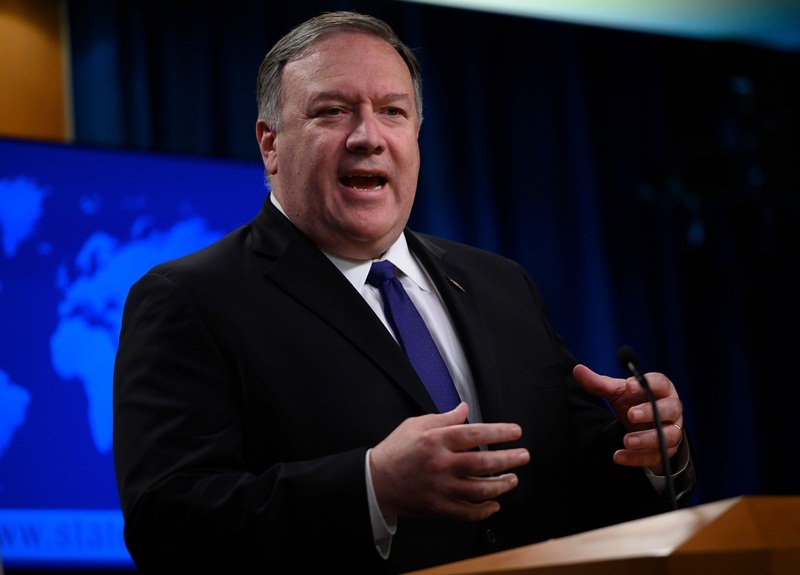 Washington: Citing the popular election slogan "Modi hai to mumkin hai", US Secretary of State Mike Pompeo has sought to take the bilateral relationship with India to the next level and said the Trump and Modi Administrations have a "unique opportunity" to make it happen.

"As Prime Minister (Narendra) Modi said in his latest campaign, 'Modi hai to mumkin hai,' or 'Modi makes it possible', I'm looking forward to exploring what's possible between our people," Pompeo said in his major India policy speech at the India Ideas Summit of US-India Business Council on Wednesday. Very much looking forward to his trip to New Delhi later this month, and meeting Modi, and his new counterpart, External Affairs Minister S Jaishankar, Pompeo listed out some of the "big ideas and big opportunities" that can take the bilateral relationship to a new level.

Giving a sneak preview of his India mission, he said he truly believes the two nations have a unique opportunity to move forward together for the good of their peoples, the Indo-Pacific region, and the world. Pompeo will travel to India, Sri Lanka, Japan and South Korea from June 24 to 30. His four-nation is aimed at deepening US partnerships in the strategic Indo-Pacific region. Pompeo said under President Donald Trump, the US has taken defence cooperation to newer heights, solidified their common vision for the Indo-Pacific and taken a far tougher stand on Pakistan's unacceptable support for terrorism.

Now the Trump and Modi Administrations have a "unique opportunity to take this special partnership even further", Pompeo said he has a strong partner in his new counterpart, Jaishankar - a former ambassador to the United States. "He said in a speech in April that he's ready to cultivate warmer relations with America - and the feeling is mutual. We want to move ahead," he said and enumerated how that can be done. First, the two countries have to build ever-stronger relationships, he said.

"Forging strong ties means formalizing these individual friendships. Last year, we kicked off the '2+2 dialogue' alongside the Department of Defence. We've also reinvigorated the Quad Dialogue among India, the United States, Japan, and Australia - all like-minded democracies in the Indo-Pacific. These are all good steps," he said. India and the US, he said, must embrace the strategic framework that works for both the nations. "We respect India as a sovereign power, with its own unique politics and strategic challenges. We realise it's different to deal with the likes of China or Pakistan from across an ocean than across a border," he said.

Making a strong case for a free and open Indo-Pacific, he said it starts from the premise that the two share common values of democracy, freedom, and a belief in the ingenuity of the human spirit. "It's only natural that the world's most populous democracy should partner with the world's oldest democracy to maintain their shared vision for the Indo-Pacific." "Third, we have to deliver," Pompeo said. The Trump Administration has already enabled American companies to export more high technology items to India, including cutting-edge defence platforms like armed UAVs and ballistic missile defence systems. "We've already launched the Asia-EDGE programme, to help India raise private capital to meet its energy security and access needs," he said.

"These are solid achievements, but we want to do much more. We clearly have overlapping interests in defence, energy, and space," said the top American diplomat. Pompeo said the first batch of India's Apache helicopters are coming off Boeing's production line in Arizona. Lockheed Martins F-21 and Boeing's F/A-18 are state-of-the-art fighters that could give India the capabilities it needs to become a full-fledged security provider in the strategic Indo-Pacific region.

"On energy, we want to complete the Westinghouse civil nuclear project, and deliver more American LNG and crude," he said adding that these steps will give Indians reliable and abundant energy and help reduce dependence on regimes like Iran and Venezuela. On space, NASA is already working with the Indian Space Research Organisation on the world's most advanced earth-observation satellite and India's second lunar mission.

But differences remain in some of the key trade and business issues, he acknowledged. "But we remain open to dialogue and hope our Indian friends will drop their trade barriers and trust in the competitiveness of their exporters and private-sector companies," he said. Pompeo said the US will also push for the free flow of data across borders - not just to help American companies - but to protect data and ensure consumer privacy. The US is eager to help India establish secure communications networks - including 5G networks, he said.