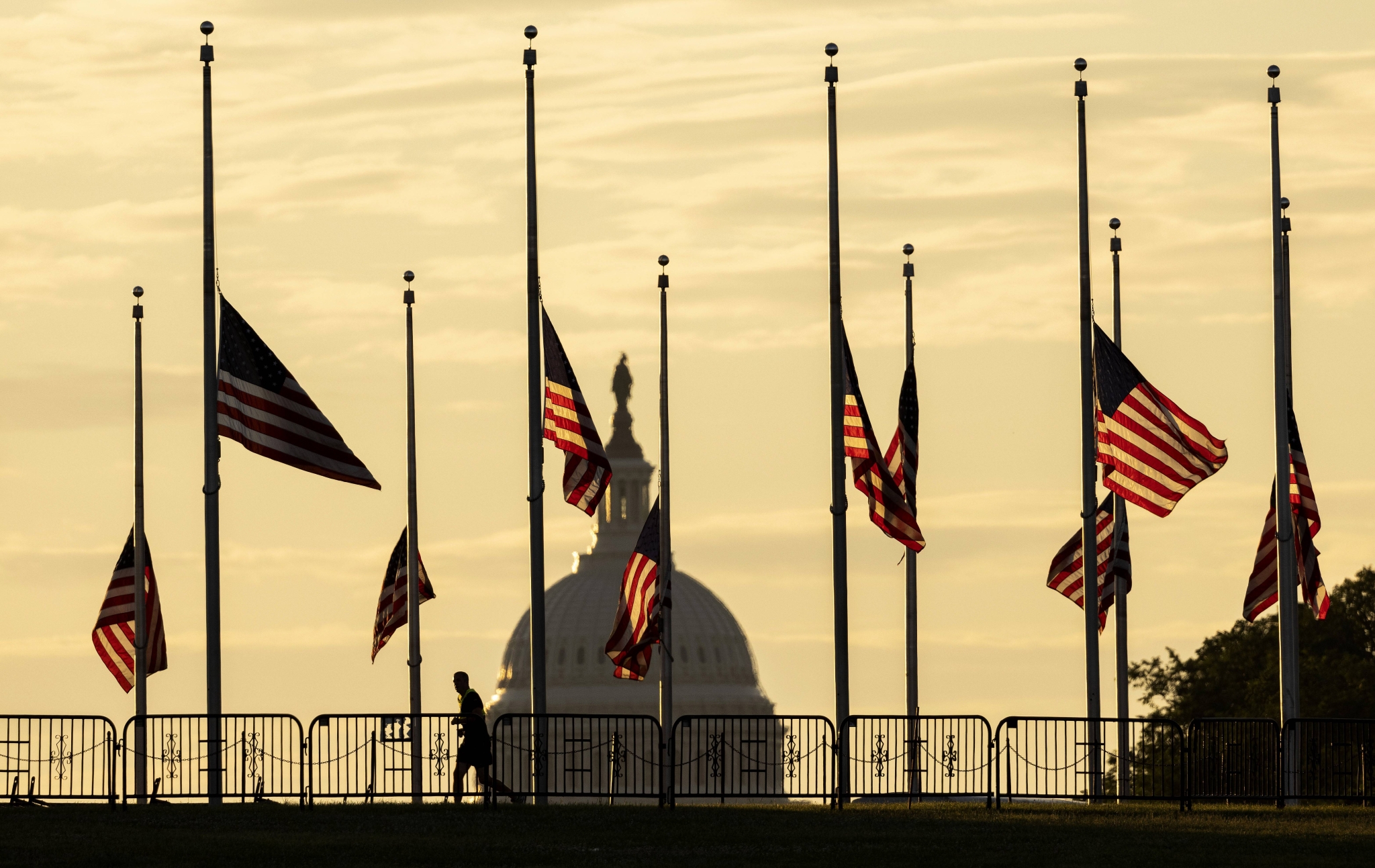 American flags are flown at half-staff in response to the San Jose mass shooting, at the base of the Washington Monument on the National Mall on May 27 in Washington, DC. President Biden ordered flags flown at half-staff after a gunmen killed at least nine people at a light rail yard in California. | Kevin Dietsch/AFP

A gunman who killed nine people at a California rail yard fired 39 shots and appeared to target some of the victims, a sheriff told The Associated Press on Thursday.

The shooter arrived at the light rail facility for the Valley Transportation Authority in San Jose around 6 am Wednesday with a duffel bag carrying two semi-automatic handguns and 11 high-capacity magazines, Santa Clara County Sheriff Laurie Smith said in an interview.

"It appears to us at this point that he said to one of the people there: I'm not going to shoot you,'" Smith said. "And then he shot other people. So I imagine there was some kind of thought on who he wanted to shoot." While there are no cameras inside the rail yard's two buildings, Smith said footage captured him moving from one location to the next. It took deputies six minutes from the first 911 calls to find the gunman on the third floor of one of the buildings, Smith said.

He killed himself as deputies closed in on the facility serving the county of more than 1 million people in the heart of Silicon Valley. More than 100 people were there at the time, and authorities found five victims in one building and two in another, Smith said.

Authorities do not yet know whether the gunman had worked regularly with any of the victims. Investigators were serving search warrants on his home and cellphone, seeking to determine what prompted the bloodshed, the sheriff said.

"I'm not sure we'll ever actually find the real motive, but we'll piece it together as much as we can from witnesses," she said.

The attacker was identified as 57-year-old Samuel Cassidy, according to two law enforcement officials who were not authorized to discuss the investigation publicly and spoke to The Associated Press on condition of anonymity.

The 9 mm handguns he had appear to be legal, Smith said, though his 11 high-capacity magazines - each with 12 rounds - are prohibited in California. Authorities do not yet know how he obtained the weaponry.

The sheriff said he also appeared to have set a timer or slow-burn device to set his home on fire, and authorities also found explosives there. The fire was reported minutes after the first 911 calls came in from the rail facility.

Cassidy's ex-wife said he had talked about killing people at work more than a decade ago.

"I never believed him, and it never happened. Until now," a tearful Cecilia Nelms told the AP on Wednesday.

She said he used to come home from work resentful and angry over what he perceived as unfair assignments.

"He could dwell on things," she said. The two were married for about 10 years until a 2005 divorce filing, and she hadn't been in touch with Cassidy for about 13 years, Nelms said.

The death toll rose from eight after officials confirmed the death late Wednesday of 49-year-old Alex Ward Fritch, who had been hospitalised in critical condition after the attack.

It was the 15th mass killing in the US this year, all shootings that claimed at least four lives each for a total of 87 deaths, according to a database compiled by The Associated Press, USA Today and Northeastern University.

President Joe Biden ordered flags to be flown at half-staff and urged Congress to act on legislation to curb gun violence.

"Every life that is taken by a bullet pierces the soul of our nation. We can, and we must, do more," Biden said in a statement.

"There's a numbness some of us are feeling about this. There's a sameness to this," he told reporters. "It begs the damn question of what the hell is going on in the United States of America?" The shooting killed employees who had been bus and light rail operators, mechanics, linemen and an assistant superintendent over the course of their careers. One had worked for the agency since 1999.

Singh had worked as a light rail train driver for eight or nine years and had a wife and two small children, said his cousin, Bagga Singh.

"We heard that he chose the people to shoot, but I don't know why they chose him because he has nothing to do with him," Bagga Singh said.

"There are no words to describe the heartache we are feeling right now, especially for his family," he wrote on Facebook. "Eight families are feeling this same sense of loss tonight and our entire community is mourning as well." There was nothing in public records to indicate Cassidy ever got in trouble with the law. He received a traffic ticket in 2019, and sheriff's officials said they were still investigating his background.

But in court documents filed in 2009, an ex-girlfriend described him as volatile and violent, with major mood swings because of bipolar disorder that became worse when he drank heavily.

Several times while he was drunk, Cassidy forced himself on her sexually despite her refusals, pinning her arms with his body weight, the woman alleged in a sworn statement filed after Cassidy sought a restraining order against her. The documents were obtained by the San Francisco Chronicle.

The Associated Press generally does not name people who say they have been sexually assaulted.

Cassidy had worked for Valley Transportation Authority since at least 2012, according to the public payroll and pension database Transparent California, first as a mechanic from 2012 to 2014, then maintaining substations.

Doug Suh, who lives across the street from Cassidy, told The Mercury News in San Jose that Cassidy seemed "strange" and that he never saw anyone visit.

"I'd say hello, and he'd just look at me without saying anything," Suh said. Once, Cassidy yelled at him to stay away as he was backing up his car. "After that, I never talked to him again." Wednesday's attack was the deadliest shooting in the San Francisco Bay Area since 1993, when a gunman attacked law offices in San Francisco's Financial District, killing eight people before taking his own life.

It also was Santa Clara County's second mass shooting in less than two years. A gunman killed three people and then himself at a popular garlic festival in Gilroy in July 2019. 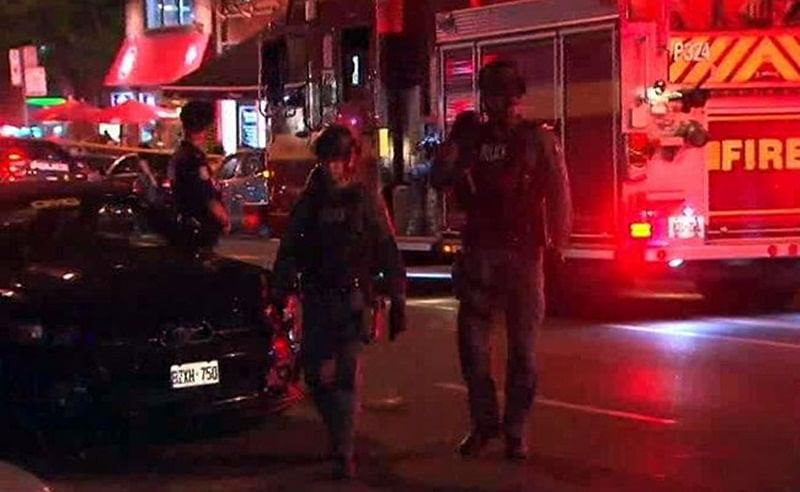 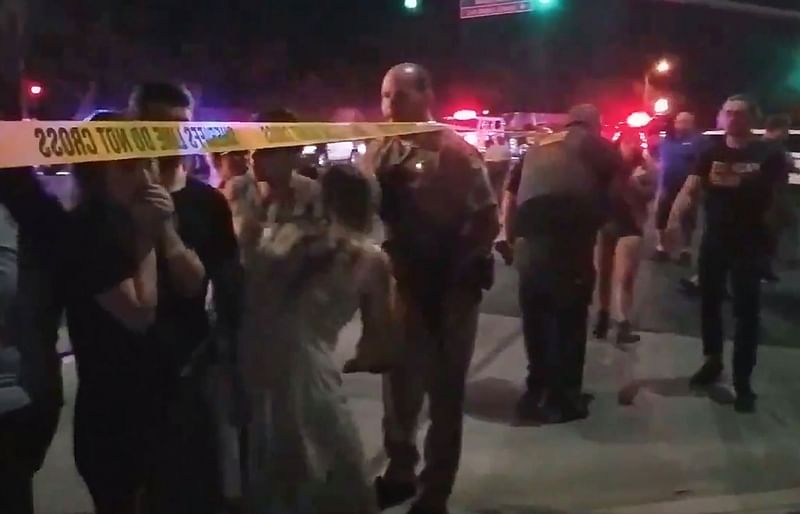