IS threatens to enter Jerusalem 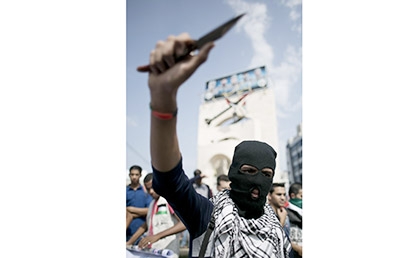 A Palestinian man holds a knife as he takes part in an anti-Israel protest in Rafah in the southern Gaza Strip, on October 20, 2015. UN chief Ban Ki-moon was to make an unannounced visit to Israel and the Palestinian territories to try to calm nearly three weeks of violence, even as a new stabbing wounded a soldier. AFP PHOTO / SAID KHATIB |

Jerusalem : The dreaded Islamic State militant group has threatened Israel in a series of new videos, warning that while they are currently fighting wars in other parts of the world, their eyes are set on Jerusalem “which they will enter.”

Praising the recent spate of stabbings carried out by “Jihadi warriors” in Israel, the Islamic State (ISIS) released several videos since the weekend uploading them on social media sites, reports PTI.

The first video, which reportedly originated in Iraq’s Nineveh Governorate, claims that Al-Aqsa Mosque in Jerusalem “was conquered by the lowest of people – the Jews,” who “sowed destruction in it.” “While all of this is happening, the knives and daggers were taken out so that they will be sated by the blood (of the Jews). A response for a response and an eye for an eye,” the narrator in a video posted on Ynet, an Israeli website, says.

Other Islamic State militants in the video congratulate Palestinians for the current wave of terror attacks. At least 41 Palestinians and eight Israelis have been killed in the recent spate of violence. “My message to the jihad warriors in Jerusalem – I congratulate you for the jihad against the exploiting Jews,” said one of them.

“We recommend that you prepare yourselves materially and morally, so that you can terrorise the Jews,” he adds, with Israeli Prime Minister Benjamin Netanyahu’s photo on screen stressing, “frighten them with car-bomb…turn them into rotten corpses and scattered body parts.” The same IS militant later asserts, “know that the soldiers of Islam are fighting here in Iraq, Syria, in Khorasan, the Caucasus, and in West Africa, but their eyes are pointed at Jerusalem and they will enter it.”

Another interviewee surprisingly implores the Palestinians to not trust either Hamas of Fatah, the two dominant Palestinian factions controlling the Gaza Strip and the West Bank respectively. “They were made in order to rip you apart and divide you. There is no difference between Fatah and Hamas. Each acts only towards its own interests. Some of them are collaborators of the Crusaders (the West) and others are collaborators of the (Iranians),” the IS militant said.