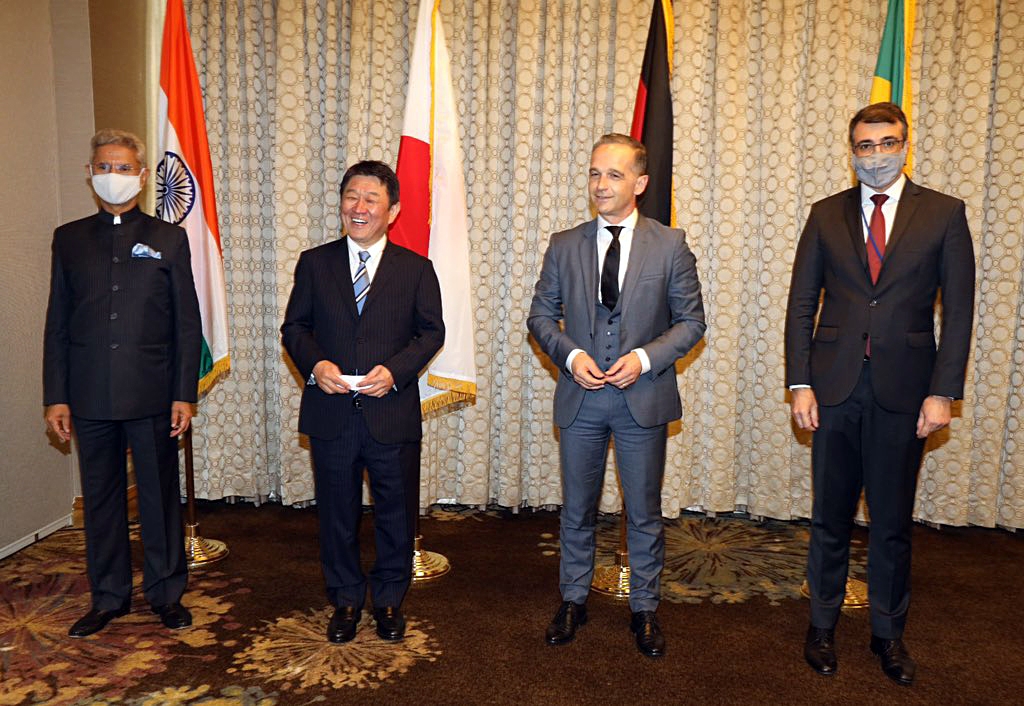 The G4 nations of India, Brazil, Germany and Japan have reaffirmed that it is "indispensable" to reform the Security Council through an expansion in permanent and non-permanent seats to enable the UN organ to better deal with the "ever-complex and evolving challenges" to the maintenance of international peace and security.

They underlined the urgency of reforming the Security Council in order to make it more legitimate, effective and representative by reflecting the reality of the contemporary world, including developing countries and major contributors, the G4 Ministerial Joint Press Statement said.

"The G4 Ministers reaffirmed that it is indispensable to reform the Security Council through an expansion of both categories, permanent and non-permanent seats, to enable the Security Council to better deal with the ever-complex and evolving challenges to the maintenance of international peace and security, and thereby to carry out its duties more effectively," the statement said.

The G4 Ministers reiterated their support for each other's candidatures as aspiring new permanent members in a reformed Security Council, it added.

The G4 Ministers expressed their strong determination to work towards launching text-based negotiations without further delay in the Inter-Governmental Negotiations (IGN), on the basis of a single document, with a view to its adoption in the General Assembly.

The Ministers instructed their delegations to the United Nations to support the efforts of the President of the 76th General Assembly Abdulla Shahid and the IGN chairs, and to identify ways to develop a single consolidated text as a basis for a draft resolution.

The Ministers also decided to intensify dialogue with all interested Member States, including other reform-minded countries and groups, in order to seek concrete outcomes in a definite time frame.

In January this year, India took its seat at the Security Council's horseshoe table as a non-permanent member for a two-year term that will end in December 2022. India served as President of the Council in August.

The G4 nations traditionally meet on the sidelines of the annual high-level UN General Assembly session.

Following the meeting, Jaishankar tweeted a G4 Foreign Ministers photo and said, India "sent a clear message on the need for reformed multilateralism. Called for concrete outcomes in a fixed timeframe." The G4 Ministers, reviewing the work of the 75th session of the United Nations General Assembly, welcomed that the Assembly reflected in its decision the commitment of all Heads of State and Government to "instil new life in the discussions on the reform of the Security Council", as mentioned in the Declaration on the commemoration of the 75th anniversary of the United Nations.

In this context, the ministers also welcomed the readiness of UN Secretary-General Antonio Guterres to provide the necessary support, as expressed in his report "Our Common Agenda" this month.

In the report, Guterres had taken note of calls from the Member States for reforms of the three principal organs of the United Nations, in particular, their commitments to instil new life into the discussions on the reform of the Security Council and to continue the work to revitalise the General Assembly and to strengthen the Economic and Social Council.

"With regard to any decisions by the Member States to adapt the intergovernmental organs to the needs and realities of today, I stand ready to provide the necessary support," the UN chief had said.

He said that after decades of debate, the majority of UN Member States now acknowledge that the "Security Council could be made more representative of the twenty-first century, such as through enlargement, including better representation for Africa, as well as more systematic arrangements for more voices at the table." The G4 Ministers expressed their strong support to the Common African Position (CAP) as enshrined in the Ezulwini Consensus and the Sirte Declaration.

The Consensus underscores Africa's goal to be fully represented in all decision making organs of the UN particularly the Security Council.

At present, the UNSC comprises five permanent members and 10 non-permanent member countries which are elected for a two-year term by the General Assembly of the United Nations.

The five permanent members are Russia, the UK, China, France and the United States and these countries can veto any substantive resolution.

The G4 Ministers welcomed that the Elements Paper prepared by the Co-Chairs of the Intergovernmental Negotiations (IGN) has evolved, with partial attributions of the positions and proposals of Member States.

Continuing with his bilateral engagements during the day, Jaishankar tweeted that he had a "useful exchange of assessments" with Maas on Afghanistan.

He said that it is "always nice to meet" Toshimitsu. "Appreciated his insights on Indo-Pacific events. A good exchange of views on Afghanistan."