On his social media accounts, Hadi Matar, the attacker, expressed viewpoints sympathetic to the cause of Iran's Islamic Revolutionary Guard

Mumbai-born author Salman Rushdie has been a marked man ever since writing The Satanic Verses in 1988.

In 1988, Iran’s then-supreme leader, Ayatollah Khomeini, pronounced a fatwa, or death sentence upon Rushdie, and placed a $1.5 million bounty on the novelist’s head.

His novel, The Satanic Verses, had been under fire for its depiction of Muhammad, Islam’s prophet. Muslims were burning the book on Britain's streets. India and South Africa banned it. There were riots in Islamabad, Pakistan and in Kashmir.

Several people were killed in anti-Rushdie riots in India, and in Iran the British embassy in the capital, Tehran, was stoned.

In 1991 a Japanese translator of the book was stabbed to death, while a few months later, an Italian translator was also stabbed and the book's Norwegian publisher, William Nygaard, was shot - but both survived.

According to the author's memoir, Joseph Anton, a BBC reporter supposedly called him on the day the Ayatollah pronounced the fatwa, asking: "How does it feel, to know that you have just been sentenced to death by Ayatollah Khomeini?”

Rushdie has suffered years of Islamist death threats after writing The Satanic Verses. They finally caught up with him.

How did the attack unfold?

Reporter Joshua Goodman travelled with his family to the Chautauqua Institution in western New York for a peaceful week away from the news. Instead, the news found him.

Goodman, an Associated Press correspondent for Latin America based in Miami, was attending a lecture by author Salman Rushdie on Friday when Rushdie was stabbed onstage. Rushdie is tended to after he was attacked during a lecture, on Friday, August 12 | AP

The reporter witnessed the attacker confront Rushdie on stage at the Chautauqua Institution and stab or punch him 10 to 15 times as he was being introduced. The author was pushed or fell to the floor, and the man was arrested.

Dr. Martin Haskell, a physician who was among those who rushed to help, described Rushdie’s wounds as “serious but recoverable.”

Event moderator Henry Reese, 73, a co-founder of an organisation that offers residencies to writers facing persecution, was also attacked. Reese suffered a facial injury and was treated and released from a hospital, police said. He and Rushdie were due to discuss the United States as a refuge for writers and other artists in exile.

No motive or charges have yet been confirmed by police, who are in the process of obtaining search warrants to examine a backpack and electronic devices found at the centre. 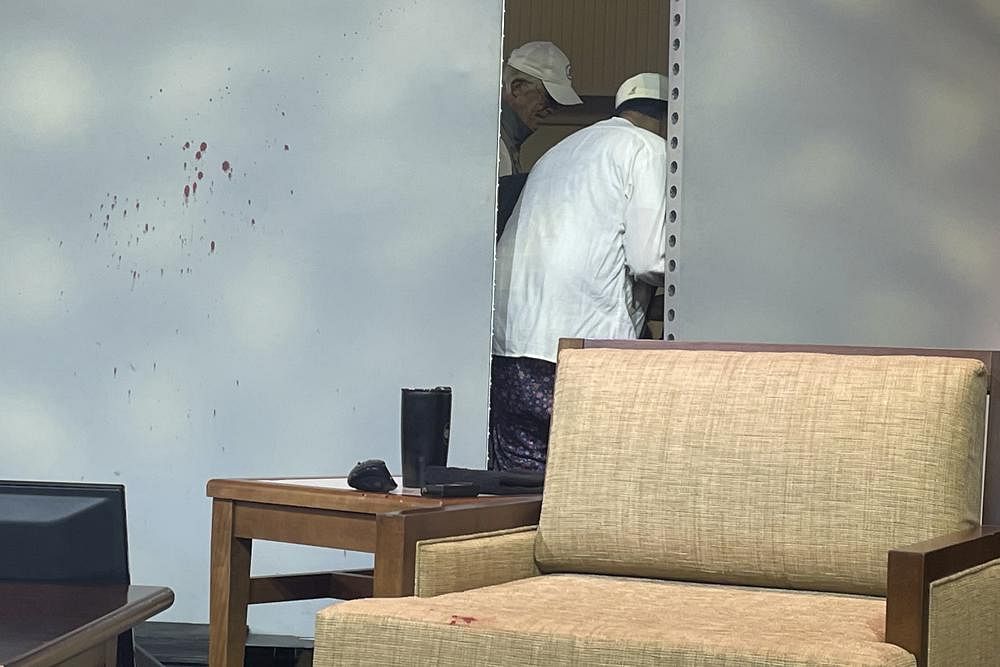 Blood stains mark a screen as Rushdie, behind screen, is tended to after he was attacked | AP

Police told a press conference that staff and audience members had rushed the attacker and took him to the ground, and he was then arrested. A doctor in the audience gave Rushdie first aid.

Linda Abrams, an onlooker from the city of Buffalo, told The New York Times that the assailant kept trying to attack Rushdie after he was restrained.

"It took like five men to pull him away and he was still stabbing," Abrams said. "He was just furious, furious. Like intensely strong and just fast."

What is Rushdie's condition now?

Rushdie's agent has said "the news is not good." He is now on a ventilator and unable to speak, Andrew Wylie said in a statement, adding that the author, 75, may lose one eye. 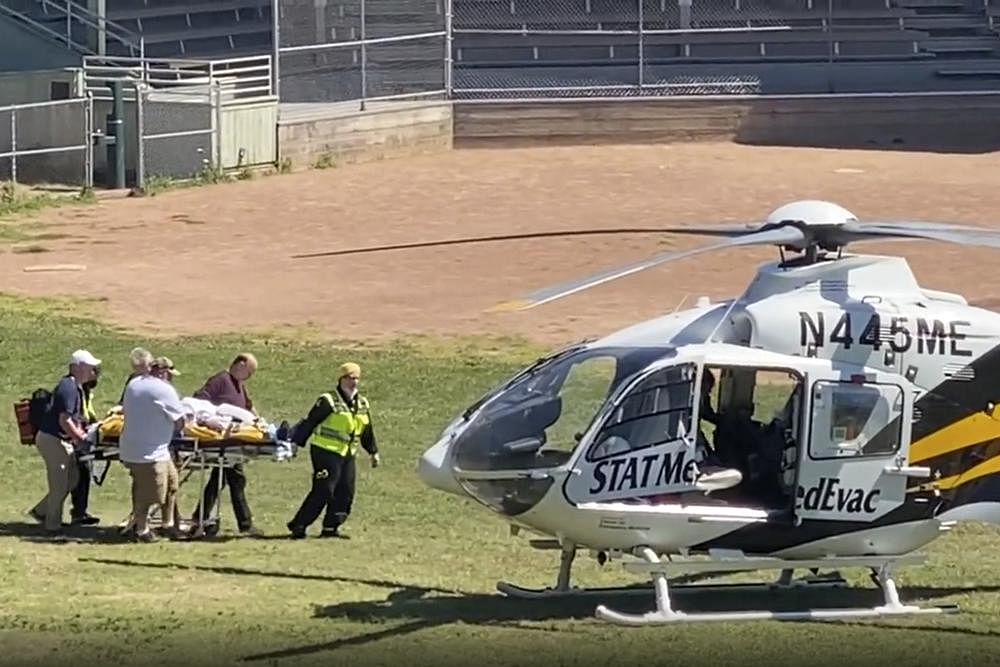 Who is the attacker? 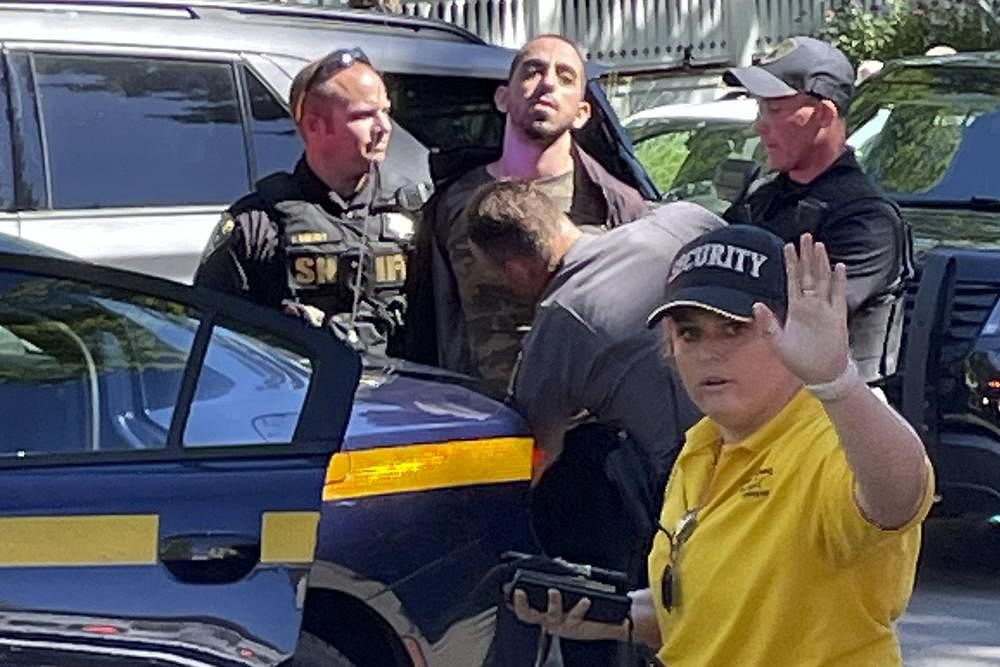 On his social media accounts, Matar expressed viewpoints sympathetic to the cause of Iran's Islamic Revolutionary Guard (IRGC). Investigators reportedly found images of Iranian commander Qassem Solemani, who was assassinated in 2020, in a cell phone messaging app belonging to Matar. 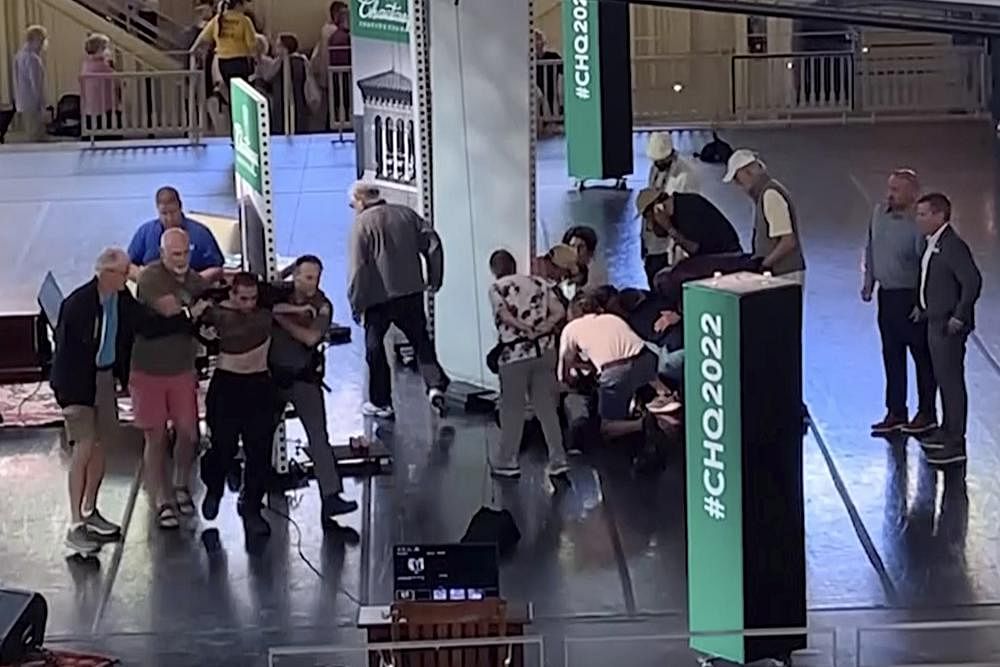 Attacker Hadi Matar, at left, being escorted from the stage as people tend to Rushdie, center right | AP

However, no direct links between Matar and the IRGC have been established so far. Police have said that they believe Matar was "working alone".

How has Iran responded?

Iranians reacted with praise and worry Saturday over the attack on Rushdie, the target of a decades-old fatwa by the late Supreme Leader Ayatollah Ruhollah Khomeini calling for his death.

Iran’s theocratic government and its state-run media have assigned no motive to the assault. The front pages of the August 13 edition of the Iranian newspapers, Vatan-e Emrooz, front, with title reading in Farsi: "Knife in the neck of Salman Rushdie," and Hamshahri, rear, with title: "Attack on writer of Satanic Verses," are pictured in Tehran | AP

Early on Saturday, Iranian state media made a point to note one man identified as being killed while trying to carry out the fatwa. Lebanese national Mustafa Mahmoud Mazeh died when a book bomb he had prematurely exploded in a London hotel on Aug. 3, 1989, just over 33 years ago.

Khomeini, in poor health in the last year of his life after the grinding, stalemate 1980s Iran-Iraq war decimated the country’s economy, issued the fatwa on Rushdie in 1989. The Islamic edict came amid a violent uproar in the Muslim world over the novel, which some viewed as blasphemously making suggestions about the Prophet Muhammad’s life. 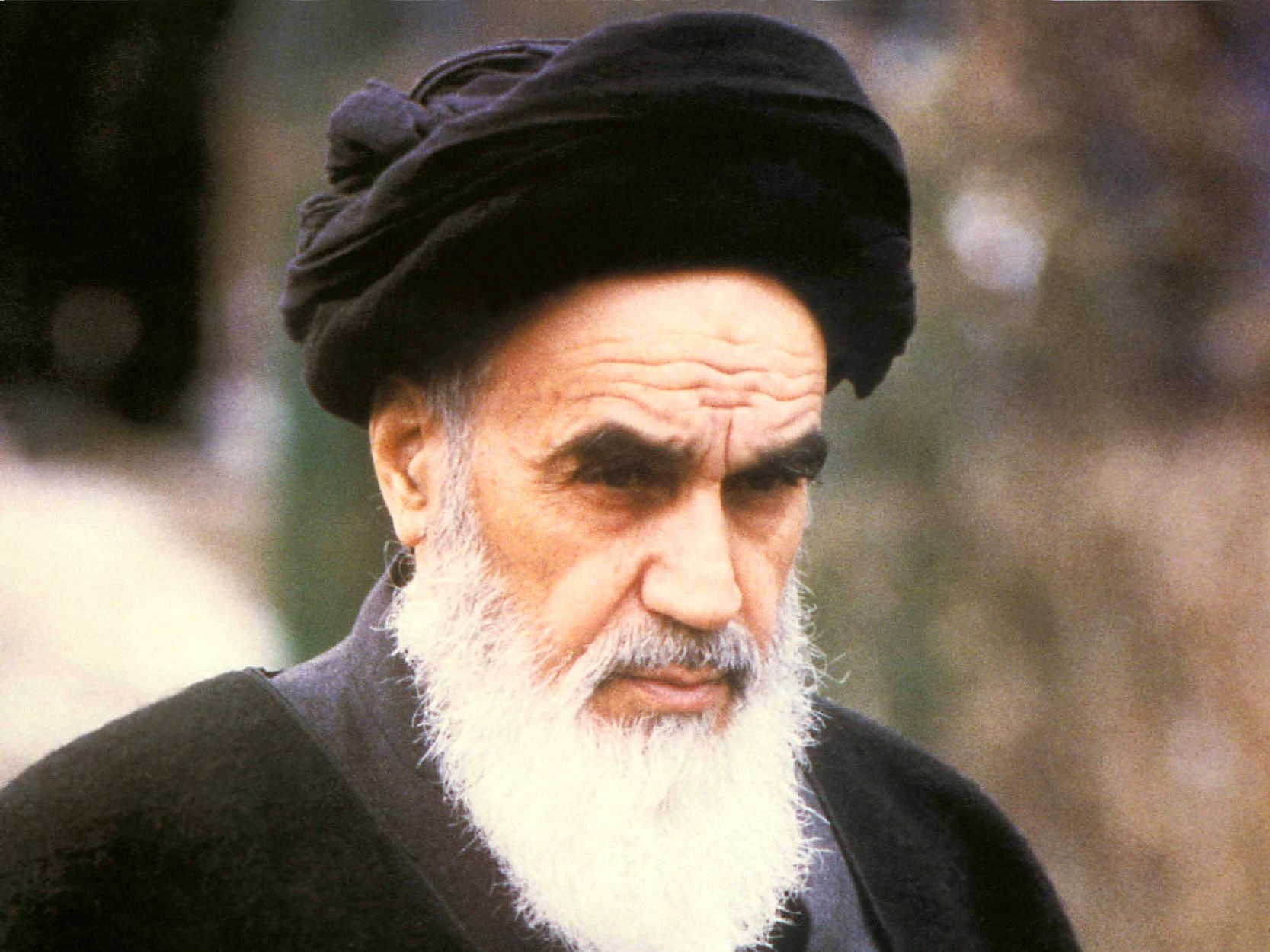 “I would like to inform all the intrepid Muslims in the world that the author of the book entitled ‘Satanic Verses’ ... as well as those publishers who were aware of its contents, are hereby sentenced to death,” Khomeini said in February 1989, according to Tehran Radio.

He added: “Whoever is killed doing this will be regarded as a martyr and will go directly to heaven.”

While fatwas can be revised or revoked, Iran’s current Supreme Leader Ayatollah Ali Khamenei who took over after Khomeini has never done so.

“The decision made about Salman Rushdie is still valid,” Khamenei said in 1989. “As I have already said, this is a bullet for which there is a target. It has been shot. It will one day sooner or later hit the target.”

As recently as February 2017, Khamenei tersely answered this question posed to him: “Is the fatwa on the apostasy of the cursed liar Salman Rushdie still in effect? What is a Muslim’s duty in this regard?”

Khamenei responded: “The decree is as Imam Khomeini issued.”