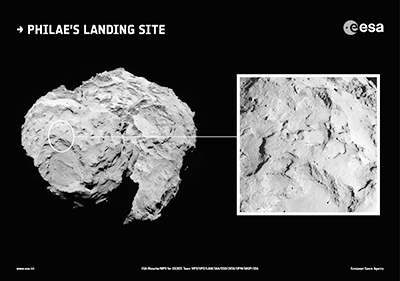 Paris : The European Space Agency (ESA) has selected the ‘head’ of the comet 67P/Churyumov-Gerasimenko as the landing site for the Rosetta spacecraft’s lander Philae, agencies report.

This will be the first-ever attempt by humankind to land on a comet. The landing, which will take place in mid-November, may be complicated as the site is strewn with boulders and the land is dotted with slopes and cliffs.

Philae, a landing module weighing about 100 kg that is part of Rosetta (robotic  space probe), will probably touch down on November 11 on the surface of Comet Churyumov-Gerasimenko which the unmanned spacecraft has been orbiting and observing from a distance of less than 100 km since August 6.

The ESA announced on August 25 the five possible landing sites, photos of which scientists were examining in detail for three weeks to work out the operating and orbital strategies needed to get the probe to each one.

To do that, Rosetta approached to about 50 km from the comet, which allowed  scientists to “gather more detailed information about each site”, in particular  high-definition photos of the comet’s rocky, dusty and uneven surface, temperature readings and pressure measurements of the density of the gas surrounding the nucleus.

Authorities have warned that the landing manoeuvure will be “complicated”  and could last several hours because of the relatively small mass — and corresponding very light gravity — of the comet, which looks something like a  potato the size of a mountain.

Once the probe has landed and attached itself to the surface, it is expected that Philae will be able to deliver valuable information to scientists for about four months.The orbiting module will continue observing the evolution of the comet’s activity through 2015.

Rosetta was launched in 2004, and, over the past 10 years, has travelled almost 6.4 billion km on its odyssey to try and obtain data relating to the solar system’s origin.