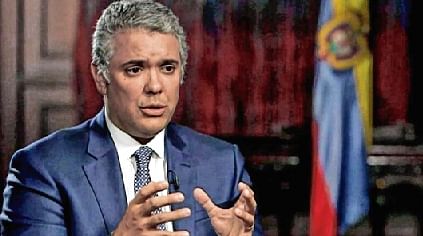 Colombian President Ivan Duque said a helicopter carrying him and officials was struck by multiple bullets in the southern Catatumbo region.

The incident took place on Friday while the President’s helicopter was flying through the Catatumbo region toward the city of Cucuta, capital of Norte de Santander province, reports Xinhua news agency.

“The presidential helicopter was the target of an attack,” Duque said, adding he was accompanied by Defence Minister Diego Molano, Interior Minister Daniel Palacios, and governor of Norte de Santander Silvano Serrano. No one was injured, the President said.

“The truth is it is a cowardly attack, where the impact of the bullets can be seen on the presidential aircraft. Once again, we reiterate as a government we are not going to falter for a single moment, a single day, in the fight against drug trafficking, against terrorism and organised crime,” Duque said, adding, he would not allow himself to “be intimidated" by "acts of terrorism”. “I have also given very clear instructions to the entire security team to go after those who shot at the aircraft and put the lives of people at risk.”