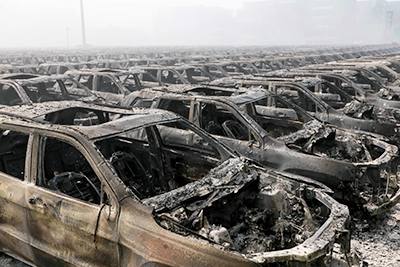 Over 50 dead, 700 hurt in China’s worst industrial disaster; a dozen firefighters were among dead

Tianjin : Massive explosions ripped through a warehouse storing hazardous chemicals in north China’s major port city of Tianjin, killing at least 50 people and leaving over 700 others injured as the blasts unleashed fireballs strong enough to light up the night sky and rain down debris.

In one of China’s worst industrial disasters, the twin blasts occurred at the Ruihai warehouse, following a fire report half an hour earlier. Fireballs erupted then ignited more explosions in companies nearby, state-run Xinhua news agency reported.

Over 10,000 people have been reportedly evacuated from the nearby areas. Authorities said fires were now “under initial control” but hundreds of personnel continued to battle blazes by spraying dry powder and burying areas in sand.

State-run CCTV said firefighters could not use water to put it out due to presence of chemicals and instead has to use sand and other materials to contain it. A dozen firefighters were among the 50 killed while 21 others remained missing. At least 71 of the total 701 injured were said to be critical. The Tianjin fire brigade said the warehouse contained dangerous goods, making the fire unpredictable and dangerous to approach and that it had sent 1,000 firefighters and 143 fire engines to the spot, around 140 kilometres from the capital Beijing.

A team of 214 military specialists in handling nuclear and biochemical materials has also reached here.

TV footage showed massive explosions in the city. The first explosion occurred was followed seconds later by another, more powerful and a series of smaller blasts. The shock waves were felt kilometres away, with window glass of buildings shattered.

The China Earthquake Networks Centre said the magnitude of the first explosion was the equivalent of detonating three tonnes of TNT, while the second was the equivalent of 21 tonnes. The impact of the blasts could be felt several kilometres away, and was registered as seismic activity at a US Geological Survey monitoring unit in Beijing.

TV footage also showed huge mushroom cloud and fire far off, with fire still raging at the place of explosions and huge smoke billowing out.

Many eyewitnesses said they initially thought it was an earthquake as the ground shook very strongly. A media report quoted a truck driver as saying that “it was like what we were told a nuclear bomb would be like. I’ve never even thought I’d see such a thing. It was terrifying, but also beautiful.” Most of the patients suffered burns, bruises, bone fractures and injuries related to the shock waves.

Chinese President Xi Jinping and Premier Li Keqiang have urged all-out efforts to save the injured and minimise casualties. The rescue operation will also use drones and helicopters.