Attacks on Hindus and their temples have intensified in Bangladesh since last Wednesday after an alleged blasphemous post surfaced on social media during the Durga Puja celebrations.
PTI 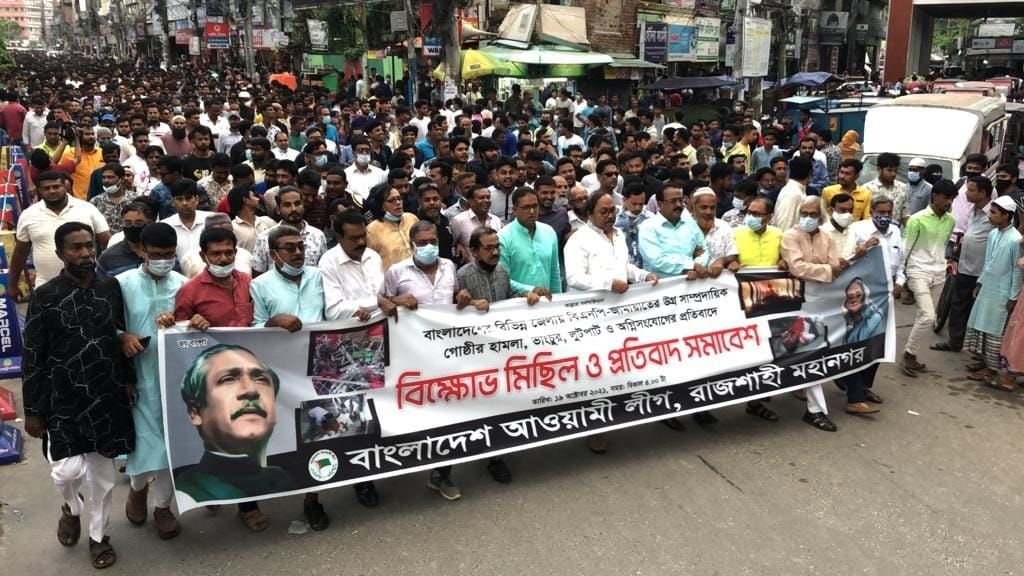 Dhaka: Protesters and academicians across Bangladesh demanded that the government should enact a new law to ensure religious freedom for everyone and condemned the mob attacks on the Hindu community and vandalisation of idols and temples during Durga Puja celebrations.

Attacks on Hindus and their temples have intensified in Bangladesh since last Wednesday after an alleged blasphemous post surfaced on social media during the Durga Puja celebrations. On late Sunday night, a mob damaged 66 houses and set on fire at least 20 homes of Hindus in Bangladesh.

Condemning the attacks on the Hindu community, protests were held across the country for the sixth day on Tuesday, the Dhaka Tribune newspaper reported on Wednesday.

Speakers at various programmes demanded that the perpetrators of the violence be brought to justice, as well as other measures to protect minorities in Bangladesh, it said.

The Dhaka University Teachers' Association (DUTA) demanded exemplary punishment for those involved in the attacks on Hindu temples and Durga Puja venues across the country. They also urged the government to enact a new law to ensure religious freedom for everyone.

Over a hundred teachers from various departments of the university participated in the programme and made a human chain, voicing the demands, at the Dhaka University campus.

Condemning the violence, DU Vice-Chancellor M Akhtaruzzaman said: "The Durga Puja celebration of this country was a model of secularism for the entire world. This festival is supposed to be open to people of all religions. The rise of communal evil in various parts of the country is disgraceful and cannot be tolerated. We urge the government to identify the perpetrators immediately and bring them to book." According to M Wahiduzzaman, former VC of Noakhali Science and Technology University, the government should immediately enact a law that effectively discourages communal violence.

"Compensation must be ensured for all the victims of the recent attacks," he added.

Former Vice Chancellor of Jagannath University Mijanur Rahman said perpetrators of communal violence often get away without punishment, and this needs to be stopped.

Leaders and activists of the Progressive Student Alliance and the Khulna University Teachers' Association also condemned the violence against the Hindu community.

Students and teachers of Dhaka University also staged a street drama titled 'Dekhte Ki Pao, Purche Bangla? (Can you see that Bangla is burning?)' to protest the attacks.

Rights activists under the banner 'Poets, litterateur, artists and journalists against communal terrorism' organised a rally in front of the National Museum at Shahbagh on Tuesday.

Though recent incidents of communal violence have raised concern in all quarters, past data shows that attacks on Hindu households, temples and businesses are not a new phenomenon in Bangladesh, according to a report in news portal bdnews24.com.

On Tuesday, Bangladesh Prime Minister Sheikh Hasina instructed her home minister to initiate immediate action against those who incited violence using religion as she asked the people not to trust anything on social media without fact-checking.

The foreign ministry said in a statement that domestic elements that opposed Bangladesh's independence from Pakistan 50 year ago were still propagating their "toxic narratives to instigate violence, hatred and bigotry".

The statement underlined that the Government of Bangladesh "unequivocally condemned those incidents and took serious note of the reactions from within and outside the Hindu community." Hindus make up some 10 per cent of the Muslim-majority Bangladesh's 169 million population.

The attacks included vandalism of and setting fire to houses, shops and businesses of the Hindu community, rapes and sexual assaults. At least 1,678 cases of vandalism and arson attacks on Hindu temples, idols and places of worship were also reported during the same period, the report said.

The data were part of ASK's annual report on human rights violations, which includes a specific chapter on attacks on the Hindu community and other minority groups. 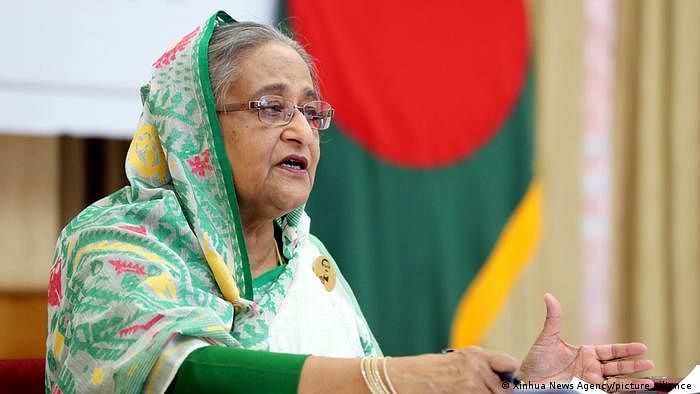