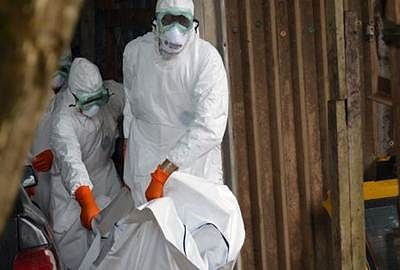 Monrovia : Liberian lawmakers rejected a proposal to grant President Ellen Johnson Sirleaf the power to further restrict movement and public gatherings and to confiscate property in the fight against Ebola. One legislator said such a law would have turned Liberia into a police state, reports AP.

The proposal’s defeat came as the World Health Organization once again raised the death toll attributed to the Ebola outbreak. The Geneva-based UN agency said that 4,033 confirmed, probable or suspected Ebola deaths have now been recorded.

All but nine of them were in the three worst-affected countries, Liberia, Sierra Leone and Guinea. Eight of the rest were in Nigeria, with one patient dying in the United States. On Friday, David Nabarro, the UN special envoy for Ebola, said the number of Ebola cases is probably doubling everythree-to-four weeks and the response needs to be 20 times greater than it was at the beginning. He warned the UN General Assembly that without the mass mobilisation of the world to support the affected countries in West Africa, “it will be impossible to get this disease quickly under control, and the world will have to live with the Ebola virus forever.”

Nabarro said the UN knows what needs to be done to catch up to and overtake Ebola’s rapid advance “and together we’re going to do it.” “And our commitment to all of you is to achieve it within a matter of months a few months,” he said. The defeat of Sirleaf’s proposal in the House of Representatives came as US military forces worked on building a hospital for stricken health workers in Liberia, the country that has been hit hardest by the epidemic.

“The House felt it was not necessary to grant her additional measures,” Speaker Alex Tyler told The Associated Press. He spoke after lawmakers rejected the president’s proposal to give her further power to restrict movement and public gatherings and the authority to appropriate property “without payment of any kind or any further judicial process” to combat Ebola.