HomeWeekendTeachers' Day 2022: When your parents are your first teachers

Teachers' Day 2022: When your parents are your first teachers

Ahead of Teachers’ Day (September 5), we spoke to some illustrious individuals who were lucky to have their parents as their first teachers

The ancient Indian Gurukul system was known for its illustrious gurus and shishyas. Some of them had their first gurus right at home in the form of their parents. On the occasion of Teachers’ Day, we spoke to some sons and daughters who were fortunate enough to have their parents as their first Gurus and the life lessons they learnt from them.

Murali Sreeshankar, Silver Medalist at the 2022 Commonwealth Games in the men's long jump 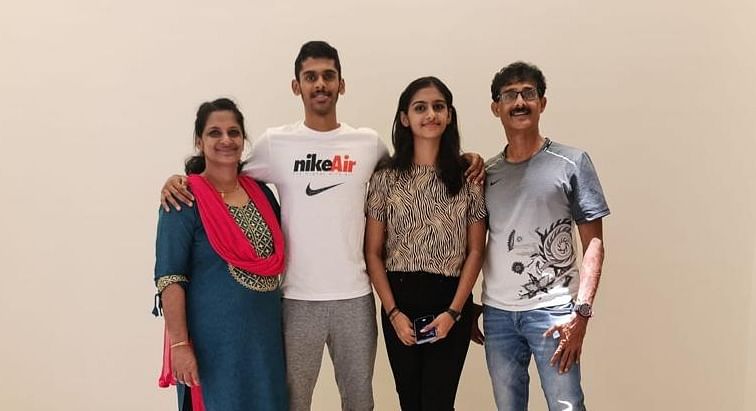 "I have only childhood memories that included sports since my entire family is into sports. At home, that’s all we discuss. My father is a fitness devotee and that is what he has always tried to inculcate in both of us. Whenever people who know my father’s athletic prowess approached me, they always praised his explosive vertical jumps especially. And they would say that it’s no surprise that I was in Long Jump.

To excel we have to be disciplined is what we have always been taught – discipline, determination and dedication. This includes giving due importance to recovery after training sessions and such simple steps actually help a person attain their big goal, which for me is winning the Olympics medal. He ensures I leave no steps unturned in the process and train hard and rest and recuperate in equal measure.

My parents have inculcated in me the desire to not only want to win medals – but the desire to impact the field of athletics. I want to reach out to fellow athletes and inspire them – I want people to believe that after a setback there is always a way to make a comeback. If I can do that with even a single athlete, I will have achieved my goal." 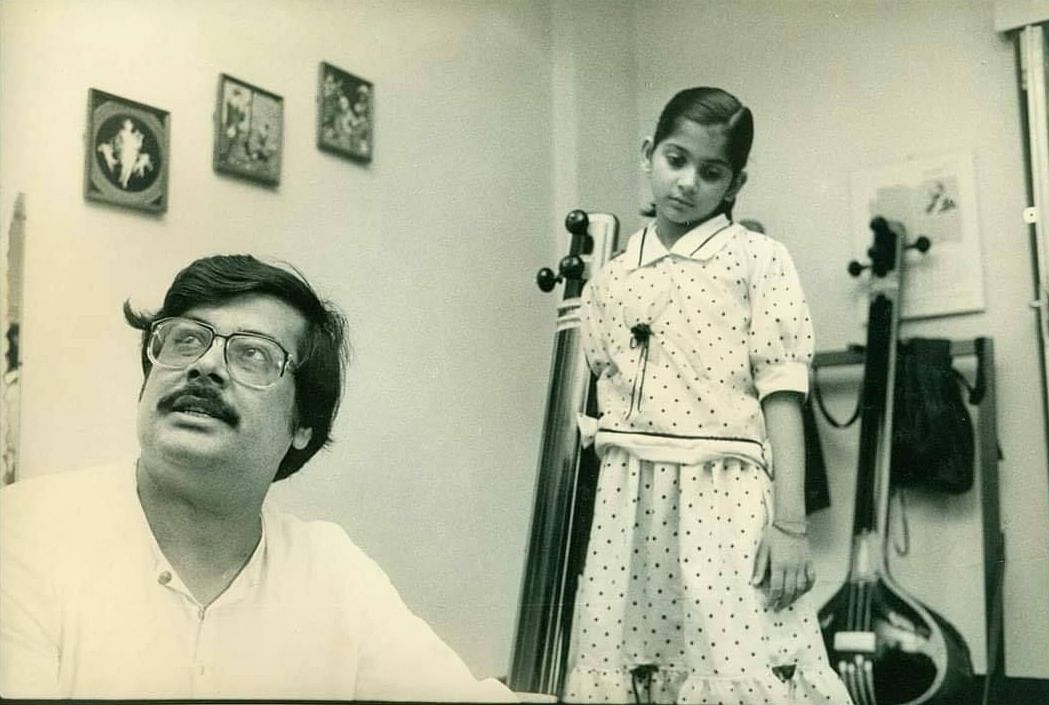 "I started my talim initially with my mother, as my father was extremely busy establishing himself. Having parents as singers/musicians has one disadvantage; you have no first concrete memory of learning. All I know is ‘Sa, Re, Ga…’ are the first alphabets I learned. My first conscious memory is learning with Baba at about 10-11 years, though by then I had learned a lot from Ma and my grandparents. Due to that music has always been a way of life and for that I am grateful. It’s difficult to explain in words but thanks to them music comes so seamlessly to me that I count it as blessings of my parents and grandparents.

In terms of life lessons, I have imbibed perseverance, humility, gratitude, the value of hard work, and commitment from every family member for what they have undergone since the Partition days. I look up to them for having built themselves up so brilliantly without having turned bitter. Who I am as a person is a direct result of what I have seen and imbibed from them all." 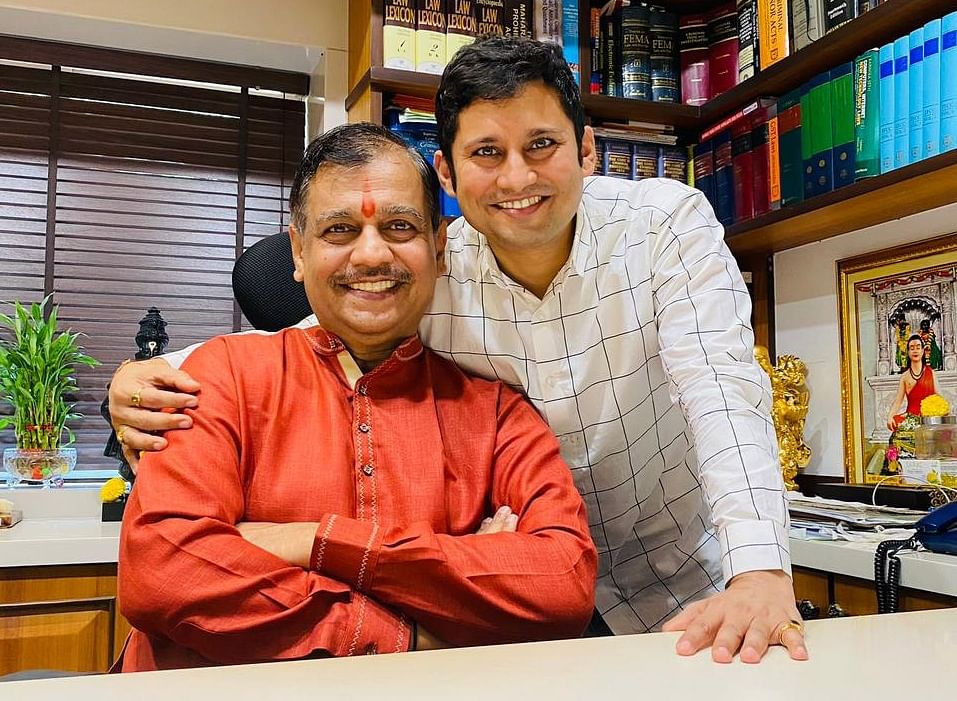 During the 1993 Bombay bomb blast case, where my father was the public prosecutor, I was about 8-9 years old. My main concern at that time was if the upcoming Madhuri Dixit-Sanjay Dutt movie would see completion and ever get released. And that was the one question I would ask him whenever he came to Jalgaon. It fascinated me that he, a lawyer, could wield so much power. As I grew, I wanted to become a doctor and that’s what would have happened had it not been for one incident. I had participated in an intra-district elocution competition and I won it – then the organisers reminded me of my legacy and inspired me to try my luck at law. So I thought overnight and I choose law instead. It caught my father by surprise as well.

I am extremely happy with my decision and I have chosen to fight from the defence side as of today. I credit my father for showing me how you can excel in this field if you can put in enough efforts. He also showed me by example how to be humble no matter how high you fly.

"Even as a toddler, I would visit Sathaye & SNDT colleges quite regularly. There I witnessed first-hand the respect that was accorded to them, people waiting their turn to speak to them and touch their feet, it may me so proud. Since both of them were PhD guides as well, I also began to notice the students who would visit our home in that context. I would hear stories of their interactions in college and that gave a completely different perspective of them from being only my parent. I understood how fond they were of both my parents and what kinds of mark they had on all these students’ lives. All this came together and triggered my desire to follow them in their footsteps, by the time I had reached eighth standard. So when after the 10th results, I was eligible for the science stream I still chose the Humanities from Sathaye College and went to study English Literature. In fact, my first job was at the same college (Sathaye) and on the first day of my job, both my parents gave me just one simple advice – be true to your profession and loyal to the institution. I am still in touch with one of my father’s ex-students and I still hear so much about him as has been the case with my mom’s students. So now when students approach me, I know I am doing exactly what I want in life. Just the other day, when a student of mine messaged me to say they are also entering the field of teaching because of me, it brought back memories of my parents to my mind." 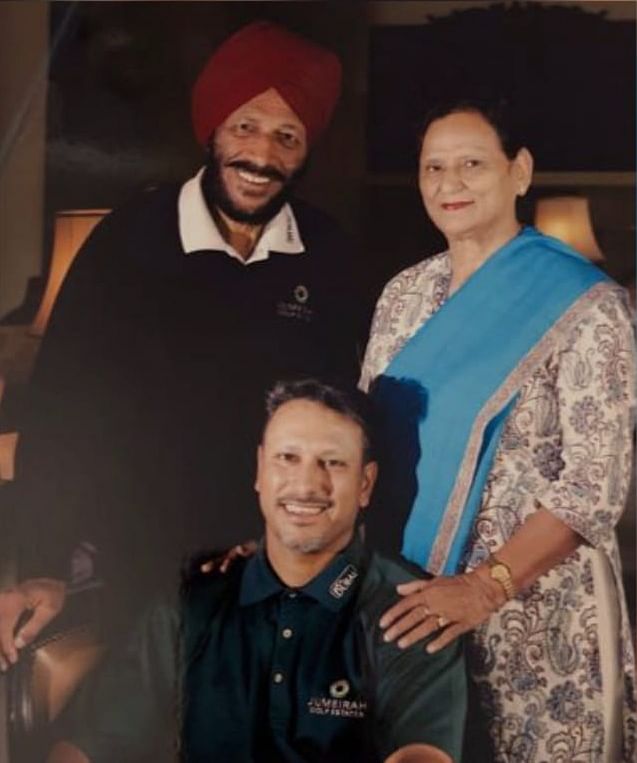 "In my second-third grade, at the school’s sports meet, my parents walked in and everybody gathered around him and wanted to interact with him. And then when I won the race, they all said ‘Of course, your son would win, there was never a doubt.” As a kid, I had no inkling about the ruckus but that is my first memory of my father’s identity as a famous star athlete.

When it comes to sports, I recall playing so many rounds of golf with him and his buddies (ex-BCCI President) I S Bindra and (ex-President, The Chandigarh Golf Club) R S Mann. The whole reason for me being in sports is a huge credit to both my parents. Initially, my father wanted me to get a professional degree from the US and get a steady job, but at the college there I won the NCAA 1993 in May, and I called them – to say that I am good enough at golf, and I want to follow a career in this sport. While they did air their worries, very fortunately they still supported me wholeheartedly. And here I am, making a living out of what I love doing.

Between mom and dad, they raised us four with a balanced hand; he was the tough parent when it was necessary and she would explain matters to us gently when required. They taught us discipline, determination and hard work, while staying humble." 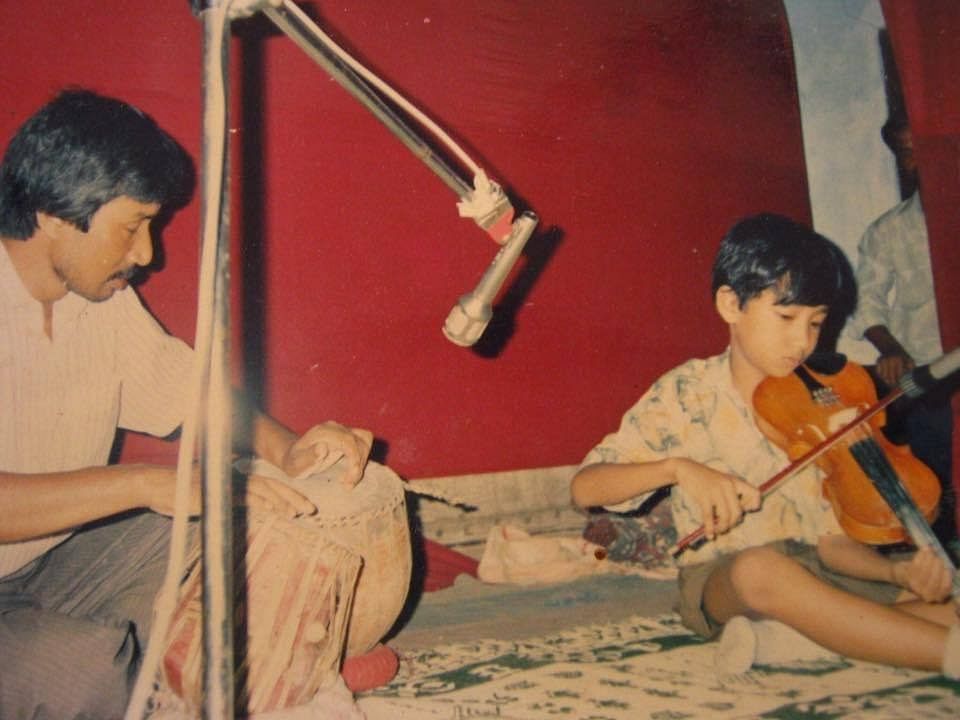 "Since I was 2-3 years old I recall my father always playing classical Indian music at home. He definitely wanted me to learn to sing classical like my elder sister. One Sunday afternoon while waiting for his students to come to violin class that he conducted at home, I remember my father was playing on his violin and I too felt like playing it. They say I played the sargam in my first try at age 5 and since then I haven’t looked back. I was completely consumed by the love of violin and could only think of it – my father was glad sensing my love for it and taught me with all his heart. I am glad that at home my father always ensured that we only heard Classical music so that our focus never wavered.

Like all children I too had thought of a different career, I wanted to become a Physics professor. But with the blessings of my father, I did choose the violin as my vocation finally." 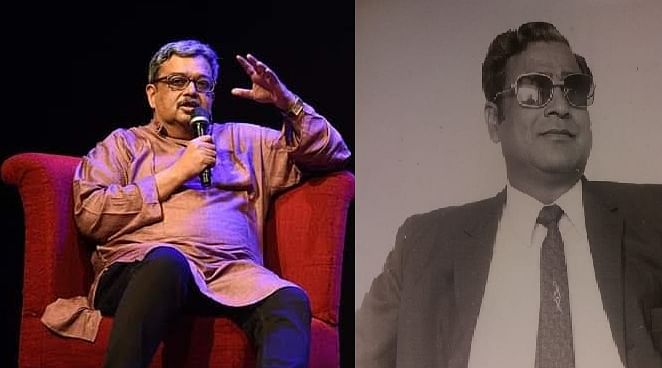 "As I child I used to visit the ToI building and the Press Club where I would be part of all the discussions he had with his colleagues. I did not know what constituted his job per se except for the fact that he did odd shifts – when I left for school, he would be asleep and when I returned from school, he wouldn’t be there. Even while being associated with one pink paper, he was also an avid photographer who contributed to the ‘Illustrated Weekly’ and other such publications. When the English cricket team visited India in 1972-73, he shot all the photographs. And I liked this part of his job more than his desk job.

Thanks to him, I met famous cricket commentators, editors and statisticians, and those were professions I wanted to be part of in those days. The desire to be a journalist was never really there, since I had realised just how tough a journalist’s life is. At the same, I used to love the fact that we would get to attend so many concerts and shows thanks to my father, since by then he was also handling the culture desk. That’s also how I got to mingle with so many esteemed critics at a young age.

When I was attempting to get admission into management schools, I got a summer job with the Sun magazine due to my father’s friends. While this was meant to be a temporary arrangement, I encountered the Bhopal Gas tragedy coverage up, close and personal – and I also observed father’s working style with a new eye, so I decided to remain in the business of writing. Even without having worked with my father, discussions with my father added so much value to my work as a journalist. His passion for whatever he did, especially photography, is what drove me as well." 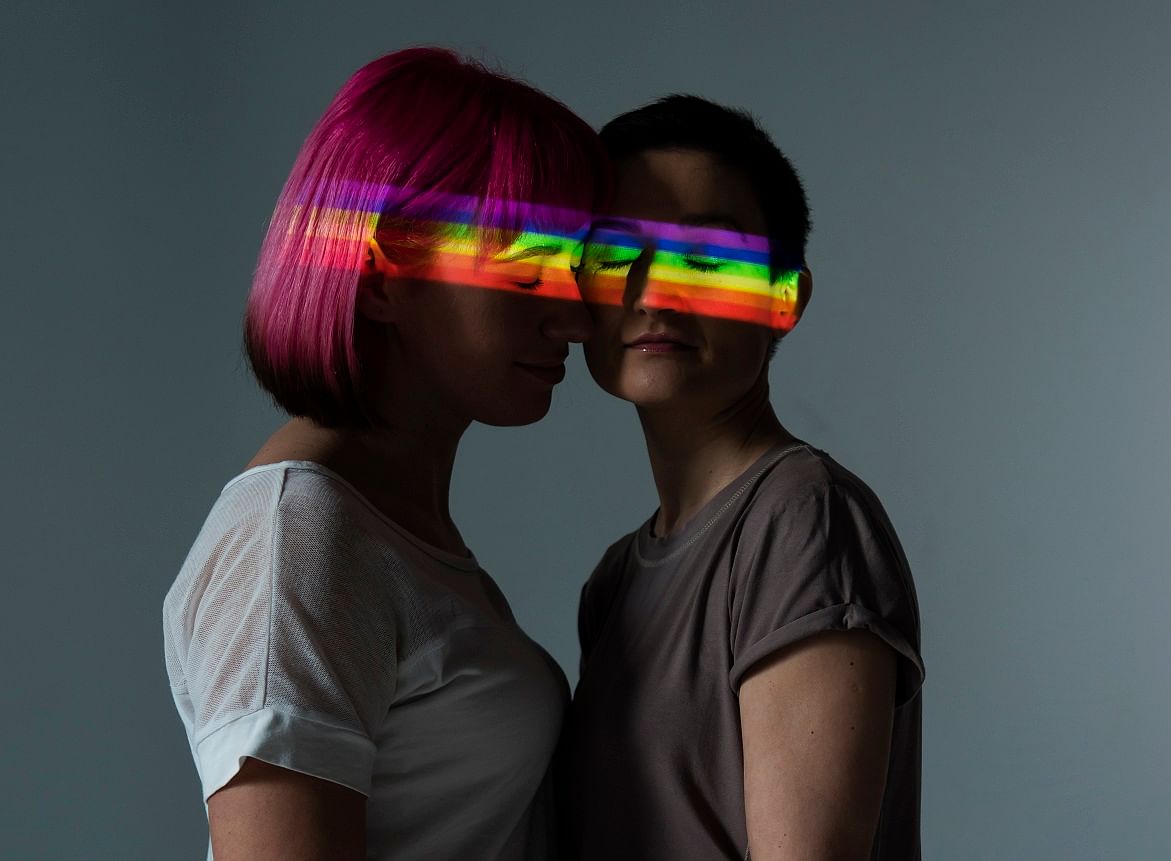