The picture is the first approved design of the New Custom House which was supposed to be grand in tradition of Victoria Terminus and Mumbai Municipal Corporation designed Ing. F.W. Stevens, Chief Architect of the Govt. at Bombay. |
Follow us on

It may sound anachronistic to call a hundred year old building new as in case of the New Custom House, but given that its predecessor the Old Custom House of 1802 vintage, is still standing in magnificent splendour nearby, and houses the office of the Collector of Mumbai, the hub of local administration, the present Custom House at Ballard Estate, indeed appears to be new.

There also used to be a King’s warehouse in the Fort Custom House wherein gold, of which custom department has taken charge was stored for safe custody. Similarly, certain departments administered by the Collector of Bombay, like Salt revenue, Coast guard service were located in this building. This building was allotted sometime in 1922 to the District Collector of Bombay and others government offices and was known as Old Custom House.

The picture is the first approved design of the New Custom House which was
supposed to be grand in tradition of Victoria Terminus and Mumbai Municipal Corporation designed Ing. F.W. Stevens, Chief Architect of the Govt. at Bombay. |

In the Branch Custom House at the Princess Docks (opened to traffic in 1880, also known as Ghadiyal Godi now) were located the Appraising and Gazing department of Bombay Customs, Cash office, Coastal Trade Establishment dealing with the country crafts and certain steam ship lines etc., and offices of Asstt. Collector. With expansion of international trade towards the end of 19th century and beginning of 20th century, two more docks were created: the Victoria Docks in 1888 and the Alexandra Docks (now Indira Docks) in 1914. New Custom House, Mumbai, 1920. Both the photographs have been taken George Wittet, Architect who designed this building and supervised its construction (Courtsey: Mumbai Port Trust) |

In view of the increase in the volume of trade and customs clearances, the Department of Commerce and Industry of the Government of India, under which the Customs Department was then working, appointed a committee in 1907 to consider the question of arrangements to be made for the transaction of the Custom business on completion of new Docks (Alexandra) under construction by the Bombay Port Trust.

The committee recommended on 16.07.1907 the closing of the Fort Custom House and construction of new Central Custom House on site located by them. Consequent of that decision on general plan and sketch an estimate of cost were prepared for the New Custom House to be constructed on the consolidated site (Ballard Estate) were taken and submitted for the approval of Government of India.

Final approval for the construction of New Custom House at Mumbai was granted on 25.11.1911 at the cost of Rs. 22 lacs including the cost of the main building and the old building. The structural cost of the main building was Rs.15.42 lacs and has foundation of average depth of 30ft beneath the harbour mud. At the relevant time the New Custom House was unique building of this nature and highest constructional rate of 8 anna per cubic feet was estimated.

The construction was completed in 1913. However, with start of the First World War it was converted into a military hospital (the vestiges of which could still be seen in the white tiles on the walls of staircase next to the entrance). The building was formally handed over to the Customs Department in 1922 when it shifted from the Old Custom House. 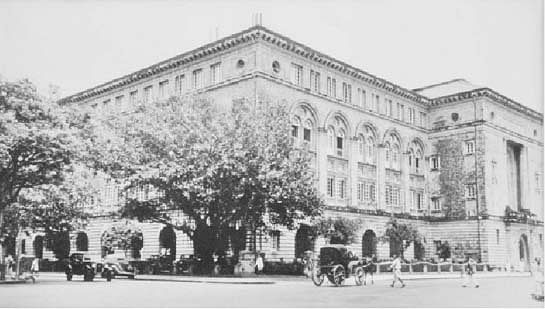 Vast quantities of materials excavated from the basin during the construction of Alexandra Docks enabled the Bombay Port Trust to fill in and create the new commercial area adjacent to the docks, named Ballard Estate after its’ first Chairman Colonel J.A. Ballard. Between 1908 and 1914, 22 acres of land on this fore shore was laid out by George Wittet (then Consulting Architect to the Government of Bombay and Bombay Port Trust), into a first class business centre with broad through fares that created vistas in the European design tradition.

Wittet evolved the control guidelines for its first 43 blocks of office buildings, most of which were designed in “European Renaissance” spirit. The estate is characterized by the uniformity of building design, heights and architectural styles – a fine example of architectural control for public utility.

New Custom House was designed by George Wittet, then Consulting Architect to the Government of Bombay in the spirit of “European Renaissance” in what came to be known as the Indo-Saracenic style of architecture, which he introduced to the city with his senior and predecessor John Begg. Wittet is most famous for designing the Gateway of India, planned to commemorate the visit of King George the Vth in 1911. Its foundation was laid on 31st March 1913 and formally opened by Viceroy Lord Reading on 17 Dec 1924.Other notable buildings designed by Wittet are Prince of Wales Museum (now Chatrapati Shivaji Vaastu Sangrahalaya) near Kala Ghoda, Small Causes Court at Dhobi Talao, KEM Hospital, etc. Later he became consulting architect to the Tata Group designing various buildings like TIFR, Bombay House etc.

Indo-Saracenic designs were introduced by British imperialist colonizers, promoting their own sense of “rightful self-glorification”, which came to appeal to the aesthetic sensibilities of continental Europeans and Americans, whose architecture came to astutely incorporate telling indigenous “Asian Exoticism” elements, whilst implementing their own engineering innovations supporting such elaborate construction, both in India and abroad, evidence for which can be found to this day in public, private and government owned buildings.

Public and Government buildings were often rendered on an intentionally grand scale, reflecting and promoting a notion of an unassailable and invincible British Empire. New Custom House bears testimony to this invincibility. It drew elements from native Indo-Islamic and Indian architecture, and combined it with the Gothic revival and Neo-Classical styles favoured in Victorian Britain.

The New Custom House marked the advent of a new building material termed reinforced cement concrete introduced to Bombay from the West, which was to dramatically alter building styles, technique and speed of production.