HomeWeekendIndependence Day 2021: Meet Nandini Bhowmik, the woman who is packing a punch against patriarchy as priestess

Independence Day 2021: Meet Nandini Bhowmik, the woman who is packing a punch against patriarchy as priestess

Bhowmik and her team have done away with certain centuries-old patriarchal rituals and practices, paving way for gender equality and women emancipation

Her life’s work is akin to a path-breaking novel or a trailblazing movie script. Nandini Bhowmik, who has challenged patriarchy to don the mantle of a priestess, has inspired the making of the Bengali film, Brahma Janen Gopon Kommoti (BJGK), in 2020.

Directed by Aritra Mukherjee, the film recently earned the distinction of being the official selection at the Toronto International Women Film Festival 2021. In January 2021, the film was selected for the Indian Panorama section of the 51st International Film Festival of India, held in Goa.

Bhowmik is also an Indologist, a thespian and teaches Sanskrit at Jadavpur University. Bhowmik started her journey into priestess-hood along with her college friend Ruma Roy. They were inspired by their Sanskrit professor at the Lady Brabourne College, Acharya Gauri Dharmapal, who was a practising priestess then. “One day, Acharya Dharmapal called me and Ruma and asked us whether we would like to carry the flame forward and become priestesses. We jumped at the opportunity. I knew that my progressive family would not mind and I was right. Ruma and I embarked on this challenge-filled voyage in 2009,” says Bhowmik.

The challenges that the two friends faced resulted from years of conditioning fuelled by an archaic patriarchal system. “Taunts and misogynistic jibes were part of our daily lives. We were regarded as audacious feminists simply because we were advocating gender equality and women emancipation,” she says.

Bhowmik questions the right given only to men to officiate religious ceremonies. “Even our relevance as priestesses was questioned. This was expected since our society possesses this prejudiced mindset that regards women as ‘impure’ because she menstruates and which is why only Brahmin men have been given the right to perform pujas. How can menstruation make a woman impure? Look at what is happening at Kerala’s Sabarimala Temple? Such prejudiced outlook needs to change,” she says.

In their quest, Bhowmik and Roy were joined by Seymanti Banerjee and Paulomi Chakraborty and together they went on to form the all-priestess group – Shubhamastu. 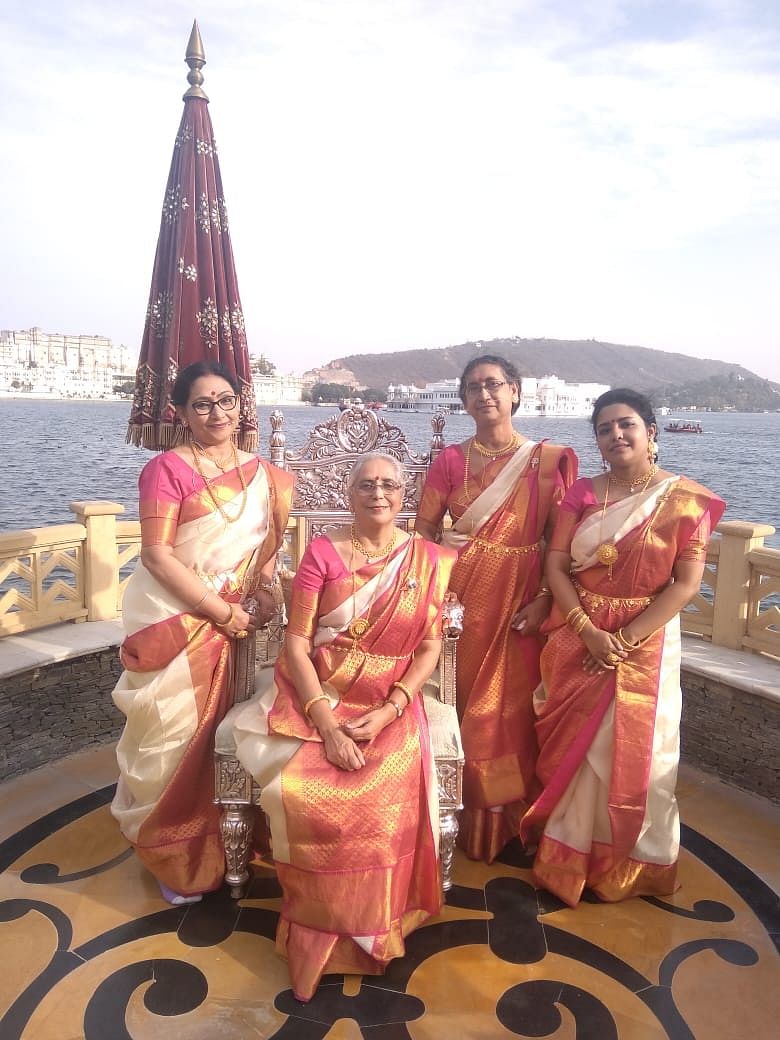 While Bhowmik and Roy chant the shlokas, Banerjee and Chakraborty sing the ethereal compositions of Gurudev Rabindranath Tagore. Today, the group not only officiates weddings, but various other religious ceremonies including memorial services, housewarming ceremony and so on.

After the initial days of struggle, ‘the winds of change’ were ushered in by progressive-minded couples who requested the priestesses to conduct their wedding as per the ‘Shubhamastu’ and not according to the traditional, patriarchal norms.

The four priestesses of Shubhamastu have not only taken the rituals followed in a Rig Vedic wedding ceremony but set them in contemporary context. They have done away with certain centuries-old patriarchal rituals and practices. The wedding ceremony is kept short and to-the-point.

For example, a traditional Bengali wedding ceremony follows the kanyadaan ritual where the bride’s father gives the girl away as a daan or donation to the groom. Shubhamastu has done away with this ritual.

The four priestesses do not endorse the lojja-bostro (cloak of shame) ritual where the moment the groom applies vermillion on the woman’s head, her face is covered with a sari. In Shubhamastu, the bride applies a dot of vermillion on the groom’s forehead. This is the ‘good luck’ tilak.  Shubhamastu takes the mother’s name before the father’s at the ceremony.

The team does not advocate the piri-ghorano ritual in which the bride sits on a low, flat wooden stool and a few male members of her family carry her around the groom seven times.

Shubhamastu has also eliminated the chaal chorano ritual in which the bride picks up a handful of rice grains and throws it behind her. This ritual signifies that the she is paying off her food debt before leaving her parents’ house.

At a Shubhamastu wedding, Bhowmik and Roy first chant the shlokas and mantras in Sanskrit and then translate them in Bengali or Hindi and English so that everyone at the ceremony can understand the meaning. One also gets to listen to the soulful Rabindra Sangeet by Banerjee and Chakraborty. 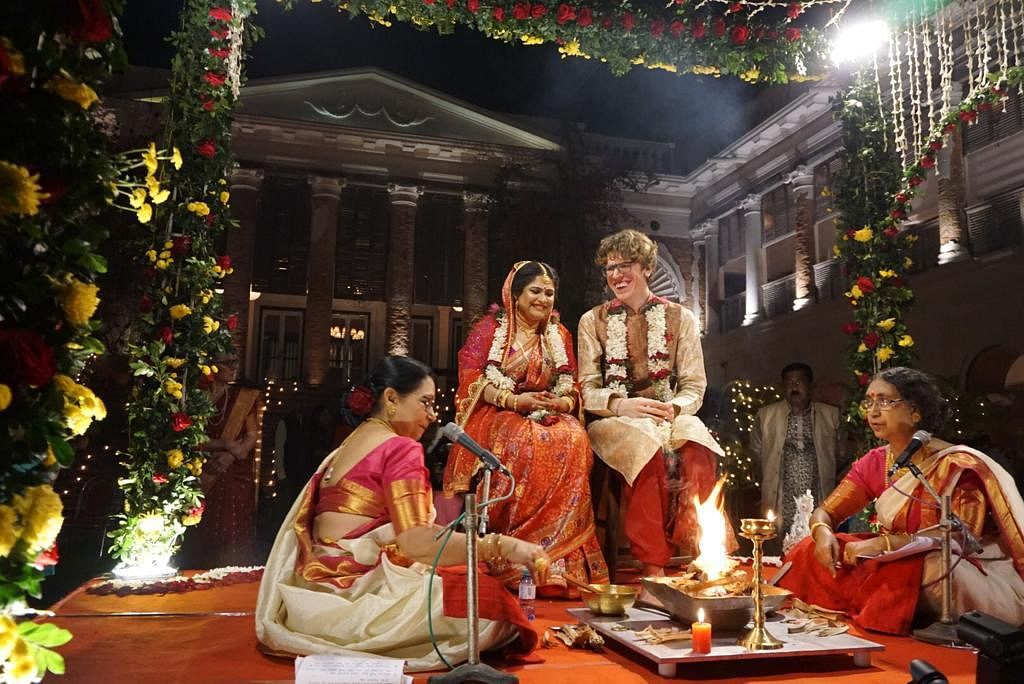 A wedding being officiated by Shubhamastu |

The scripts comprising the shlokas and mantras as well as the Rabindra Sangeet playlist are upgraded from time-to-time. The group has different scripts and song-lists for the various religious ceremonies.

“Our history tells us about Sati, women’s illiteracy and the sordid plight of widows. This was changed by visionaries such as Ishwar Chandra Vidyasagar and Raja Ram Mohan Roy. Even though we have come a long way since then, a lot more needs to be done. It is heartening when a film like BJGK gets recognition both in India and abroad. It means that our ideas are gaining acceptance and that gives us the strength to strive on,” says Bhowmik, who has officiated the weddings of her two daughters which were her special occasions.

Bhowmik believes the true essence of independence lies in the freedom to lead her life as per the ethics, knowledge, philosophy, spiritual enlightenment and grooming that she has received from her grandparents, parents, teachers and elderly.

“It also means that I should have the independence to share this knowledge with my next generation and with everyone around me, so that it can benefit society at large. If I am not allowed to do that or if I face obstacles, then I would not consider myself to be truly independent,” she adds. 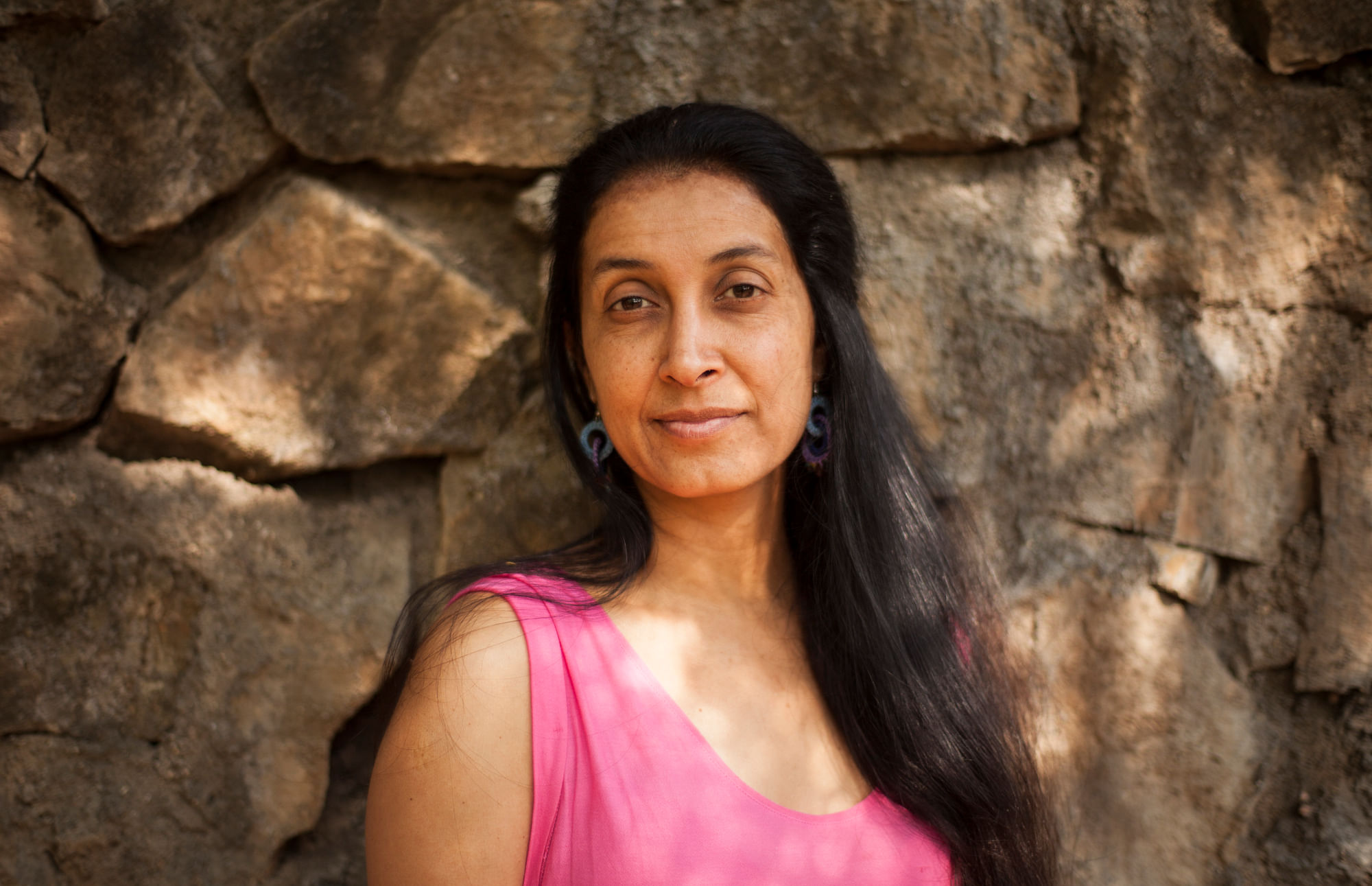