Char – The No Man’s Island: A Touching Story Of Displacement 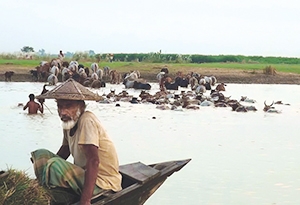 ‘Char’ is a generic term in Bengali for islands formed within the river. But in this instance, this Char a specific Char that falls between India and Bangladesh and where all people who lost homes came and settled, writes SHOMA A. CHATTERJI.

Way back in 2002-2003, filmmaker Sourav Sarangi witnessed a whole village close to the India-Bangladesh border disappearing into the river Ganges due to erosion. The houses, the trees, the roads, the structures, everything the locals created over the years were going down. That image itself struck him deeply. He witnessed hundreds and thousands of people become homeless overnight. What remained with similar natural destructions was an island that floated up and the name Char got attached to it. ‘Char’ is a generic term in Bengali for islands formed within the river. But in this instance, this Char a specific Char that falls between India and Bangladesh and where all people who lost homes came and settled waiting desperately for the next natural calamity to take a toll on their lives.
“You need conflict to make a film,” says Sarangi elaborating on his motivation to make this very challenging documentary. “The river became the official border with the Partition in 1947. Now, the border is fixed but the river keeps moving here, so I saw a great dichotomy. I saw the conflict between modern technology and the traditional views about the river. To control the water of river Ganga, the Government of India built a huge barrage-like dam that changed the entire landscape further threatening the lives of the people. I saw the conflict between human existence and the harshness of nature, the power within nature that can destroy as smoothly as it can create,” he adds.
‘Char – The No Man’s Island’ tracks the journey and lifestyle of 14-year-old Rubel who lives in Char and has dreams of making it big in some other city because he knows that the fate of Char is determined and decided by Nature. Rubel is the single earning member of a family living on the dredges of poverty not knowing where the next meal will come from and if it does, whether they will still be around to eat it. Rubel crosses the Ganges which divides this section of India from Bangladesh. He smuggles rice from India to Bangladesh where the point of crossing acts as the international border. They are basically from India but the river eroded the residents of these people from mainland India when Rubel was only four years old. He wanted to study but there is no school and his parents are not interested in his education because that will place their lives at stake.
The families of the homeless settlers’ lives and livelihoods are controlled by the border police. Rubel dreams of going his old school in India but reality forces him to smuggle stuff to Bangladesh. But he fights on while monsoon clouds arrive inviting the flood, the river swells up again. ‘Char may disappear but we won’t,’ smiles the boy.
Today, around 10,000 people from India and Bangladesh, Hindu and Muslim inhabit this island that spans 150 kms of land that could increase or decrease depending on the mood of the weather, the torrential rains and thunder and the course of the river’s flow. The film follows around a year’s time, capturing the seasons of the year beginning with Durga Pooja. The white kash flowers that bloom only during the festive season and created memorable poetic aesthetics in Ray’s Pather Panchali are swallowed without pity by the hungry river and the angry weather.
“I was fascinated with Rubel, a very charming and bright boy. The questions that haunted me were – where do these people go? Where does the huge expanse of land go? I kept visiting the place, meeting the same people who lost their homes. They accepted me as a friend from a city. And very slowly, Char- The No Man’s Land was born.”
The sound design and the cinematography, complemented by the real voice-over of the filmmaker and his interactions with the locals, using the camera to underscore the contrast between the beauty of Nature and the havoc it can create in the lives of people already teetering on the brink of poverty underscore that the documentary format can also become an aesthetic statement. The camera closes on a small pyramid that has Bangladesh inscribed on one side and India on the other, rising in the middle of the river fixing the border.
The unpredictable weather conditions are brought across in the beginning through a weather bulletin from Radio Bangladesh. There is a shot in Black- 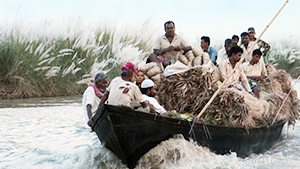 and-White of people watching helplessly from the hilly shores how a palm tree being pulled into the waves of the river during a storm, taking away chunks of land in its wake. A beautiful shot captures the image of Durga being taken into the river for immersion on a boat and then the image floats in the waters. The festival does not change the status quo of the lives of those who live in Char. “They live in their own land like paupers while the men are like haunted people rowing into the river in search of another Char to rise from the waters,” says Sarangi in the voice-over.
Technology has seeped into the lives of these people. The Border Police carry their walkie-talkie. The smuggling boys carry their cell phones and their calculators. These are not a comfort or a luxury for them but a necessity more relevant than basic food while shelter remains as fragile as ever.
The film also weaves in the story of Rubel wanting to leave the Char to make a life for himself. He goes away to Kerala but fails to get a job and comes back while the film is being shot. In the end, Rubel, now grown, has gone away again and this time, his family has no clue about where he has gone and when he will return or whether he will return at all. Like the river Ganga that has toyed with the lives of his people, he has changed directions too. At one point, the Ganges becomes a voice that says, “I take away but I also give back.” Does it really give back? Without being sentimental or melodramatic at any point throughout the film, Sarangi succeeds in driving home the point – that for the poor, the marginalised and the ignorant, even Nature is an enemy. He shows and tells us the story of Char and Rubel and leaves us to draw our own conclusions.