People screamed from the ground asking Rahul Gandhi to continue independently, without the ongoing Gujarati translation. Thus, the translator walked off the stage.

Watch: Did translator suddenly walk away from Rahul Gandhi's on-stage speech during election rally? | Twitter
Follow us on

However, several tweets have mocked and claimed that the translator walked off due to a boring speech being rendered on stage. That isn't the same as we know that it as a mutual call that made the Hindi-to-Gujarati translator take his seat. "They understand your Hindi, please proceed," the Gujarati man repeated the shout from the audience while signing off. 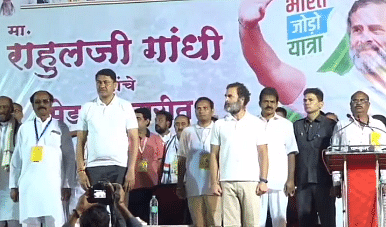 Since 1995, the Bharatiya Janata Party (BJP) has won the state's assembly elections six times in a row, and it is currently vying for a seventh straight victory. The arrival of the Aam Aadmi Party has added some spice to the Congress election, which has always been a bipolar poll.

The first round of voting will take place in two phases, on December 1 and December 5. Vote counting is scheduled on December 8, 2022.

Read Also
Who is Aarush Gupta? The influencer who role-played Aftab Poonawalla, Shraddha Walkar in viral...