'You are a star, keep shining': Sachin Tendulkar congratulates Neeraj Chopra over his Diamond League triumph

Sachin Tendulkar congratulated Neeraj Chopra for his triumph in the Diamond League, Lausanne Switzerland and praised the Tokyo Olympic winner for his perseverance and hard work on Saturday.

"Disappointment makes you stronger and it propels you to aim higher & become better than before. Your win at the #DiamondLeague in Lausanne just goes to show that perseverance & hard work always pays off. You are a star @Neeraj_chopra1! Keep shining always," Tendulkar tweeted.

The javelin star made a stunning comeback from injury to win the javelin throw competition at the Lausanne Diamond League with a best throw of 89.08m.

With his best throw at the event, Chopra became the first Indian to clinch the prestigious Diamond League Meeting title with a win in Lausanne.

Neeraj's throw sequence on the day was 89.08m, 85.18m, he skipped the third attempt while making a foul in the fourth. In also skipped his fifth attempt and then made a stunning throw of 80.04m in his sixth and final attempt.

Earlier in July, star Indian javelin thrower Neeraj Chopra was ruled out from Commonwealth Games. Neeraj sustained a groin injury in the finals of the World Athletics Championships in Oregon on Sunday, where he clinched the silver medal, to end India's 19-year-long wait for a medal at the world championships. 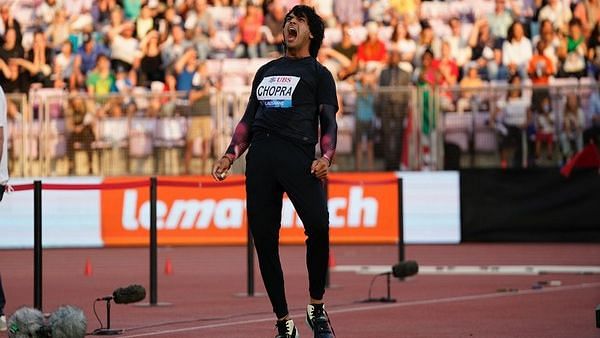