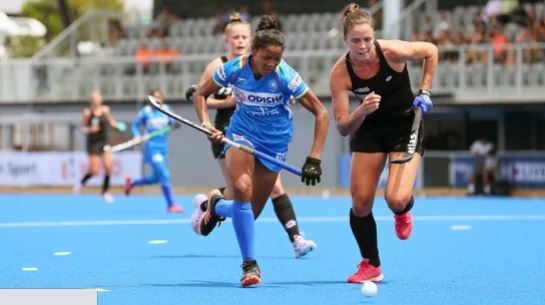 New Delhi: The Indian women's hockey team has gained a lot of confidence from its stellar display at the the Tokyo Olympics, according to midfielder Salima Tete, who feels the side showed signs of a bright future despite not ending on the podium.

The Indian women's team fought tooth and nail against some of the top teams in the world at the Tokyo Games. The Rani Rampal-led side made history when it defeated the three-time Olympic gold medallists Australia 1-0 in the quarterfinal and played in its first-ever Olympic semifinal against Argentina.

"Our performance in Tokyo is slowly starting to sink in now. We were really dejected when we lost to Great Britain in the bronze medal match, but now we are seeing the positives from the tournament," Tete was quoted as saying in a Hockey India media release.

"We may not have won a medal, but we have certainly gained a lot of confidence from the way we played in Tokyo and it's definitely going to help us to grow as a team and produce much better results in the future," she added.

When asked about the most important things that helped India perform exceedingly well at the Olympics, Tete said, "We always found a way to push the ball forward and attack our opponents in the Olympics. We created many goal-scoring opportunities and ensured that we utilised our Penalty Corners well.

"And also we gave everything we had on the pitch and never gave up, no matter what the situation was."

The 19-year-old, who played an integral role in India's brilliant performance at the Tokyo Games, added that she feels blessed to have received an opportunity to play in the Olympics at a very young age.

"I have learned a lot by playing in high-pressure situations and I am certainly going to use my learnings in the upcoming competitions.

"One learns a lot when one is against the best and we are very happy with the way we gave a tough fight to each of our opponents in the knock-out stage of the Tokyo Games," said the midfielder.