The 33-year-old from Kerala was recently given the best goalkeeper award in men's section at the FIH annual awards for his performance in India's historic bronze medal-winning feat at the Tokyo Olympics.

New Delhi: Veteran India goalkeeper P R Sreejesh wants to compete at the Paris Olympics but said on Saturday a lot will depend on his fitness and performance in the run-up to the 2014 Games.

The 33-year-old from Kerala was recently given the best goalkeeper award in men's section at the FIH annual awards for his performance in India's historic bronze medal-winning feat at the Tokyo Olympics.

Asked if he would be playing at the Paris Olympics, Sreejesh said: "No player will say no to an Olympics, we are greedy people. The motivation will always be to work hard and give best.

"I have had a career of 21 years. So I will always want to play one more match, one more Olympics so as long as my team members don't kick me out, I will stay in the team for sure," he quipped.

During the India Today conclave, he added, "But nothing is certain in a sportsperson's life. There can be an injury, performance can go down, others can do better than me." Sreejesh's former teammates Rupinder Pal Singh, Birendra Lakra and SV Sunil had recently retired following a successful Olympic campaign to pave the way for the youngsters.

When India skipper Manpreet Singh was posed the same question, the captain said: "He is going to Paris from our side. Sreejesh is the best goal keeper, so we would want him to be there at the goal. We have the confidence in him but rest depends on his fitness and other things." Sreejesh, who has shown the ability to get better with time, has no doubt that both the men's and women's teams will make the podium at the 2024 Games, but says the road ahead will be tougher.

"The motivation will always be there to change the colour of the medal in Paris. But the road is not easy. We had won a medal 41 years ago and after that Indians sent us to Olympics with a lot of expectations.

"Now that we have proved we can win, the expectations will be higher when we go to Paris. But it won't be easy, it doesn't happen overnight.

"The women's team was unlucky to miss out this time but definitely I am confident that both teams will finish at the podium in Paris." Sreejesh had pulled off a stunning save in the final few seconds of the bronze medal match against Germany at Tokyo.

Recollecting those six seconds, he said: "When we got that PC, our reaction was like what will happen now, there was a chance that it can slip away but there was not much time to think. We had to defend. I was planning my defensive structure looking at the opposition.

"As a goalkeeper I had my own things, to focus and I was just thinking that I have been playing for so many years, so I just have to save this one." While the men's team won a medal, their female counterparts missed out narrowly, finishing a creditable fourth after losing 3-4 to defending champions Great Britain in the bronze-play play off.

India women's team skipper Rani said the disappointing campaign at the 2016 Rio Games was the turning point for the side.

"For us, 2016 was first Olympics, we didn't win any match and I think it was a turning point for us because we learnt how to handle pressure in such big event and this was a different Olympics because we lost first three matches but still had the self-belief," she said.

"We lost holland and germany but we played good hockey and this gave us the confidence that we can beat other teams and that belief carried us through against Australia." Goalkeeper Savita Punia also echoed her views.

"We had qualified after 36 years in 2016 Olympics but there was no performance. I was not happy with my performance so in the next 4-5 years we wanted to do something.

"The England match we didn't play well and on hindsight because of that match, we did well in the next games. Our coach was so upset that he didn't have lunch with us.

"So Ireland match was more important than quarterfinals, which was a pressure match. We knew Australia is a good team, they were higher ranked, so pressure was on then.

"We were also confident because we had lost a close match against Australia in 2018 Commonwealth Games, so we just wanted to do better, there was no option." 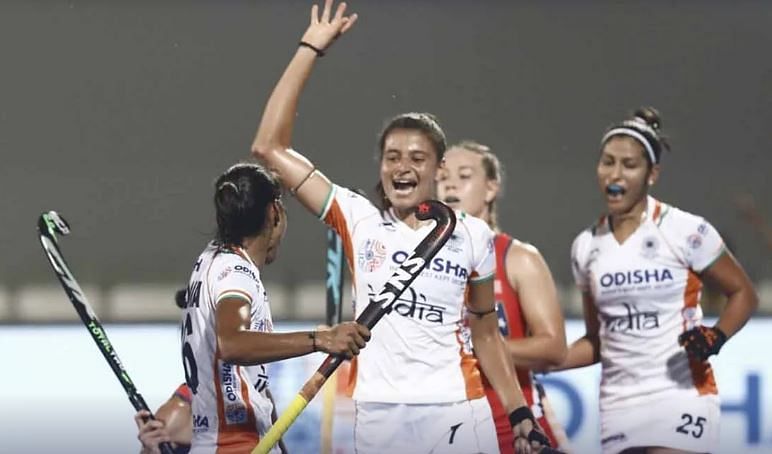