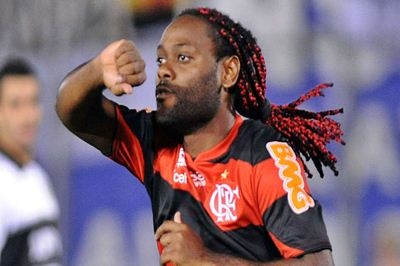 Curitiba (Brazil): Former Brazil international footballer Vagner Love scored on either side of halftime as Corinthians extended their lead at the top of Serie A standings with a 4-1 victory over Atletico Paranaense here.

Midfielder Renato Augusto also netted a brace for the visitors while Bruno Mota was on target for Atletico at Arena da Baixada here on Sunday. Corinthians are now eight points clear at the top after second-placed Atletico Mineiro fell 1-4 to Sport Recife, reports Xinhua. In Rio de Janeiro, Flamengo’s poor form continued with a 0-1 home loss to Internacional, a result that all but ends their hopes of a top-four finish. Meanwhile, 10-man Sao Paulo salvaged a 2-2 home draw against Vasco da Gama thanks to a late Rodrigo Caio strike. The hosts were forced to play the entire second half with a man less after Matheus Reis was shown a second yellow for a bad tackle. In other matches, Chapecoense won 3-2 at Gremio, Santos beat Goias 3-1 and Ponte Preta overcame Coritiba 3-0.