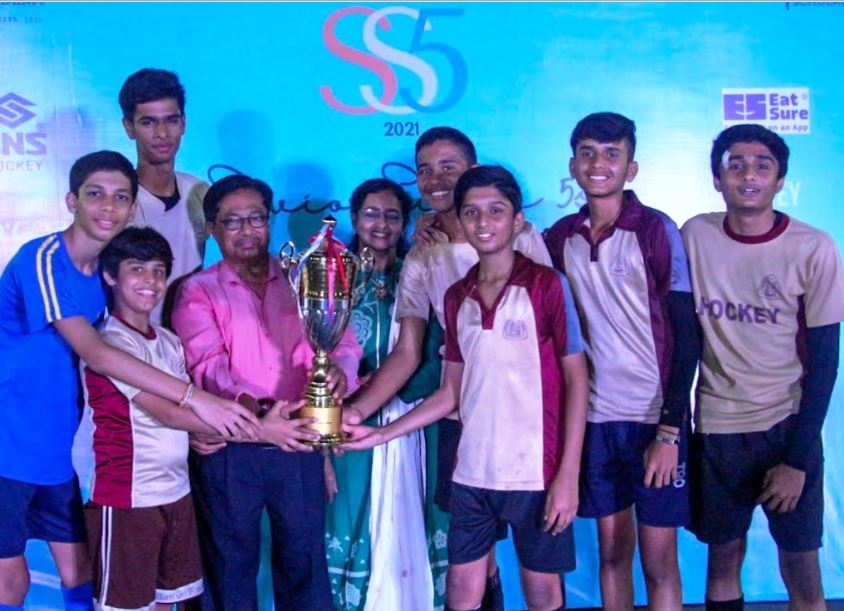 A 5-star performance from young Neel Amin was the highlight of the day. The energetic and enterprising forward Neel displayed plenty of opportunism, scoring all the five goals in leading Children Academy, Malad to a nerve-racking 5-4 victory against India Rush Blue in an absorbing boys’under-16 final of the inaugural Savio Super 5s hockey tournament, at the St. Dominic Savio High School ground, Andheri (East).

India Rush youngsters who fought gallantly scored their goals through the efforts of Aashay Jadhav, Arnold Misquitta, Kieanen Pereira, and Cristiano Corriea, all chipping in with one goal apiece.

Both Children Academy and India Rush boys were engaged in a fierce battle for supremacy and there was plenty of excitement throughout the encounter for the goodly crowd to witness.

Neel pounced at every opportunity to hit the target. His eagerness and hard work in front of the rival citadel reaped rich rewards as he struck the opening three goals to give the Malad schoolboys a healthy 3-0 cushion at the break.

On resumption, India Rush started with a bang and scored two quick goals through Aashay Jadhav and Arnold Misquitta to close the gap to 2-3. Neel once again was in the thick of the action and ensured Children Academy stayed in front by adding the fourth to lead 4-2 before Kieanen Pereira succeeded in scoring India Rush’s third goal midway through the second period to stay in the fight (4-3). But Children Academy’s spearhead Neel netted a late fifth goal and in the next minute Cristiano Corriea scored the fourth for India Rush, but it was a bit late and they had to settle for second best.

Udaya start with a win

Dashing striker Siddu Pawar scored the all-important goal to seal Udaya’s win and a place in the quarter-finals.

This meet is open for men and women athletes above 35 years.

The championship will be the basis to select athletes to participate in the Maharashtra State Masters Athletics Championship to be held at Akola during the first week of January 2022.