No respite from McGrath as India falter again 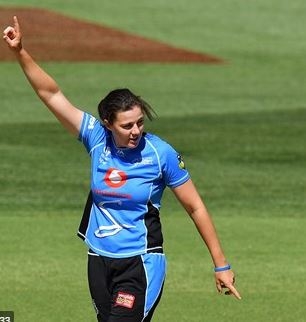 Gold Coast:An unbeaten 44 off 31 balls by Tahlia McGrath apart from 61 of 43 balls by Beth Mooney, followed by consistent strikes from the bowlers, helped Australia to a 14-run win over India in the third and final T20I at the Metricon Stadium.

The victory also meant Australia finished the multi-format series on a high, winning 11-5.

Chasing 150, Smriti Mandhana smashed 52 off 49 balls after starting slow in the Power-play and losing Shafali Verma early. She also shared a stand of 57 with Jemimah Rodrigues (23 off 26 balls) to keep India in the hunt.

Smriti's dismissal off Nicola Carey triggered a slide; India lost Harmanpreet Kaur (13), Pooja Vastrakar (5) and Harleen Deol (2) in three successive overs for just 10. Richa Ghosh remained unbeaten on 23 off 11 balls in a late cameo with four boundaries. But 150 proved to be too much for India to hunt down.

Earlier, Beth and Tahlia scored crucial knocks to post a respectable total for Australia who were 73/4 in 11.1 overs. In desperate need of a fightback, Beth and Tahlia joined forces for a 44-run partnership in 6.1 overs. Tahlia started with a slog-sweep off Rajeshwari Gayakwad through square-leg. Mooney, who geared up with a hat-trick of boundaries against Harmanpreet Kaur in the eighth over, reached her half-century with a classy cover-drive off Renuka Singh.

Though Beth fell in the 18th over when Harmanpreet pulled off a brilliant one-handed catch off Rajeshwari, Tahlia along with Georgia Wareham ensured that Rajeshwari's over cost 16 runs. Shikha Pandey and Deepti Sharma leaked 10 runs each in the final two overs. Tahlia's late onslaught pushed the target out of India's reach.

Highest run-getters in the multi-format series