Indians were without masks at the book launch; BCCI stated that the Indian team didn't take permission from the board to attend the event, says former cricketer Dilip Doshi 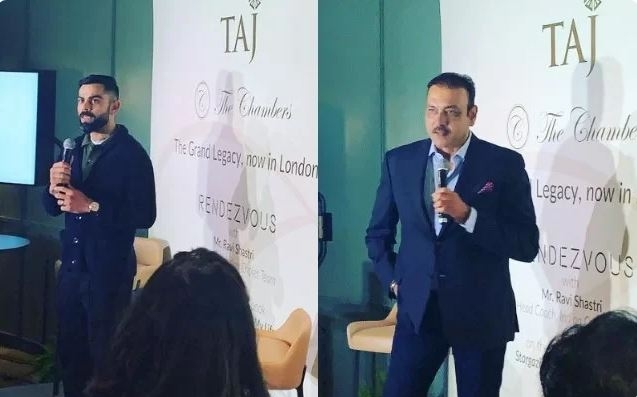 New Delhi: The Test match series between England and India was an eventful affair with the last Test deciding the outcome of the series.

However, the fifth Test match was cancelled after Covid-19 entered the Indian camp. Ahead of the fourth Test, the Indian team had attended the book launch of head coach Ravi Shastri.

Later, Shastri was blamed for the series of events that led to the cancellation of the final Test. Now, former cricketer, Dilip Doshi has come forward to open up on the event.

And now, days after the BCCI stated that the Indian team didn't take permission from the board to attend the event, former cricketer Dilip Doshi, who was present at the book launch, has revealed another shocking detail, saying that players were not even wearing masks.

The former Indian cricketer also said most of them didn't stay for more than five to ten minutes after witnessing so much crowd.

"I was present at the book launch. I was actually invited by the Taj group. A lot of dignitaries, and Team India players were present there, for a short while, and I was shocked to see that none of them was wearing a mask," Dilip Doshi was quoted as saying by India Ahead.

The Virat Kohli-led side was on the threshold of creating history in the fifth and final Manchester Test after beating England at The Oval in London. However, Shastri, bowling coach Bharat Arun, fielding coach R Sridhar and physiotherapist Nitin Patel tested Covid-19 positive after their RT-PCR confirmed the infection during The Oval Test.

Shastri was subject to severe criticism after that but the coach dismissed allegations that his book launch event was to blame for his Covid infection. He also claimed that the whole of the UK was open.

To this, Dilip Doshi said, "Whether the society has to wear a mask, whether it is mandatory or not is decided by the politicians. Prime Minister Boris Johnson decided that England was safe enough because of the double vaccinated program and a lot of people have been vaccinated here therefore immunity is apparently high and so it was then the society is open to all avenues and they did that.

"So, there are two ways of looking at it. That's one aspect of life but as a touring team when you are here on a mission then I would expect that every time the Indian team or the Indian squad are offering themselves in public where there is little more crowd, if I were then I would definitely be wearing a mask, not because I don't trust others but I am barring myself from getting infected."

He further hinted that the lucrative Indian Premier League (IPL) could also be the reason for the Old Trafford match to be called off.

"I was speaking to a dear friend of mine Michael Holding earlier today and he mentioned to me that the Indian Cricket board did not want the last Test. So, their original suggestion was that the tour should end after the Oval Test, leaving enough time between IPL and the last Test in England.

Giving a gap of 15 days because of the quarantine period in between, but I believe ECB did not want that and they may have insisted on the fifth Test.

"Now with the happening of the last Test, I can understand that there were two things at stake if the IPL had to be cancelled for any reason like this that you are talking about, I read in the print, it might cost them a huge, very huge amount. And today let's accept that the cricket game is governed by corporate rulings. All the money that everybody is enjoying whether it is ECB, Australian Cricket board or anybody in the world, majority of money/funds comes from India.

India is a powerhouse at the moment of cricket and we are proud of it but that also gives the enormous responsibility for how we carry ourselves with great dignity. Which I think is very important," he added.